The narrowness, the engine form, the gas tank shape, the muffler configuration—all attributes that have been in the Sportster DNA for years.

We promise we won’t mention the “M” word, but just think about this: As the 1 on the front of the year has changed to a 2, the Sportster continues in a form that would be instantly recognizable to any time-traveling motorcyclist who’d just whooshed in from 1957. And the 2000 Sportster 1200 Custom is no exception. The narrowness, the engine form, the gas tank shape, the muffler configuration—they all came into the Sportster DNA more than four decades ago and remain to this day.

To those basics, though, the Custom adds important differences. Alone among Sportster models, the Customs—both 883 and 1200—place their pegs and foot controls forward, so a tall rider can stretch out comfortably with slightly bent legs. That’s quite a contrast to the standard Sportster peg placement that last made sense with the 33-inch-plus seat height of Sixties’ models; with the current low seats, that peg location puts your knees above your hips. Then there’s the XL1200C’s 21-inch front wheel that contributes to both the custom look and the archetypal Sportster leanness. The Custom’s unique handlebar riser carries both the idiot lights and the speedometer, and the skinny handlebar itself further contributes to the bike’s waifish look. Deep chrome on the engine sidecovers and elsewhere adds eye candy and a sense of quality that confirms the 1200C’s place at the top of the entire 6-model Sportster line. Still Sporty after all these years: The classic XL profile endures, even as it enters its sixth different decade.

For Y2K, the Custom, along with all other Sportsters, is the recipient of a long list of changes, many of them nearly invisible. One that can’t be seen at all is the three-piece crank. All Harley V-Twins—VR1000 excepted—prior to the Twin Cam 88 used a crankshaft with a tapered crankpin that was pulled into both of its flywheels with a thin nut. Making room for the nuts narrowed the en­gagement area of the flywheel and pin; and that reduced engagement, as well as the taper of the fit, allowed some flexing of the crank. For the Twin Cam engine, Harley de­veloped the same kind of straight, press-fit crankpin that is used almost universally in other manufacturers’ motorcycle engines fitted with roller-bearing big ends. The result was a crankshaft that is stronger, stiffer and less costly to manufacture. Accordingly, when the single-cylinder engine for the new Buell Blast was being developed—with its roots deep in the Sportster motor—it was given a Twin-Cam-like three-piece crank. Now the circle has been completed, and the Sportster gets a crank very similar to that of the Blast.

Harley also took this opportunity to rationalize crankshafts between Buell Twins and Sportsters. Previously, the Buells had special, light-flywheeled cranks; now both Sportsters and Buells get the same straight-pin crank, which provides even less flywheel than last year’s Buells. You can feel that reduced flywheel effect every time you blip the throttle. The 1200C’s engine responds and picks up revs quickly, though it’s still a Milwaukee powerplant; it doesn’t zing upward as do some imported four-cylinder. Just as on the Buells, the lighter flywheels also improve shifting, for there is less crank mass to work against synchronizing speeds during shifts. High-quality details add up, making the Sportster worthy of a thumbs-up.

In the nearly invisible category, all 2000 Sportsters get new crankcases with Twin-Cam-like steel-bodied lifters and machined-in-the-cases lifter housings. Once again, this design was first conceived for the Buell Single, aimed at improving performance while cutting costs. Once proven in the testing of the Buell, it was incorporated into all Y2K Sportster engines.

Far more prominent on the Custom are the new brakes that comprise four-piston calipers squeezing one-piece discs. Fitted alll across the Harley line—Springers ex­cept­ed—these new brakes bring more power to bear when stopping than ever before found on a stock Harley. A light pull on the front brake of the Custom, which has just a single front disc, brings the bike’s front end down almost abruptly, largely because of the soft fork springs. A slightly harder pull produces a very quick, tire-howling stop.

The rear brake also is strong, almost too much so, in fact. That’s an easily fixed problem, though: Rotating the brake lever forward with the available adjustment, so that peak braking isn’t reached quite so early in your ankle movement, makes the rear brake more controllable and far less likely to lock unexpectedly.

Around town, the Custom is a dream. It’s a light and lithe companion that rewards every little trip with its performance and character. The high-mounted, drag-style handle­bar po­sitions your upper body in an almost up­right position, arms straight out ahead, and your legs are comfortably stretched forward.

Even in stock form, the 1200 accelerates quickly, pulling smoothly from down low to well past 5000 rpm. Stiil, it doesn’t perform quite as well as it could. For reasons we don’t quite understand, Harley has chosen not to give the two other 1200 Sportsters the same engine tuning as the XL1200S Sport, which has even more torque and bottom end at no cost of smoothness or ridability. Fortunately, accessory mufflers and air-filter, from Harley or otherwise, can add about 10 percent to the Custom’s power at very little cost in anything other than overall noise output. 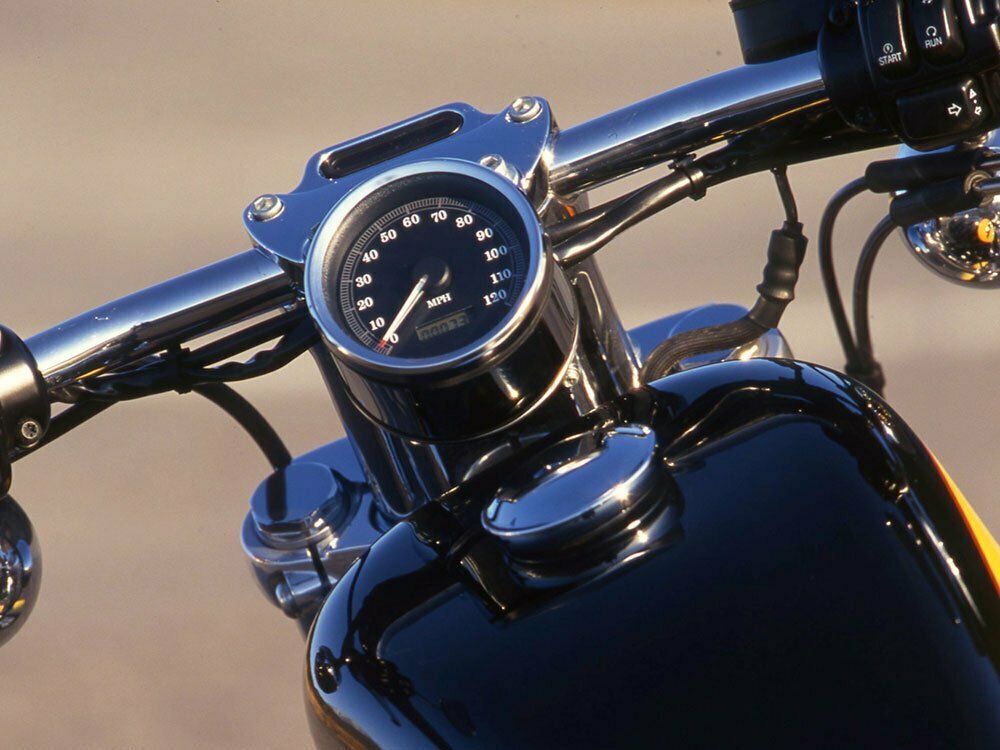 A simple speedometer hung from the handlebar mount, with a bank of warning lights built into the mount: Think of it as Instrumentation Lite.

There’s no disappointment with the shifting, however, which ranks among the best ever experienced on a Sportster. And for the most part, there are few gripes about the overall smoothness of the engine. At lower engine speeds, whether you’re just casually notching your way up through the five gears or cruising up to around 65 mph, vibration isn’t much of an issue. You definitely know that the Custom remains Harley’s last machine without either rubber-mounting or counterbalancers, but in town or at legal speeds on most highways, it doesn’t matter much.

Only when you get to one of those interstates on which the limits are high and mostly ignored does the 1200C start to show its lim­itations. By the time you reach 80 to 85 mph, the vibration that added character at 60 is now beginning to test yours. The riding position that seemed perfect at lower speeds meets its match in the wind blast, and the pure skinniness of the Custom means there’s little to break it. Between the vibration and the wind, the Custom is out of place in these truly fast fast-lanes. Under those conditions, it almost begs you to find the next off-ramp, to take a two-lane where it can be more at home and use its good handling and brakes. 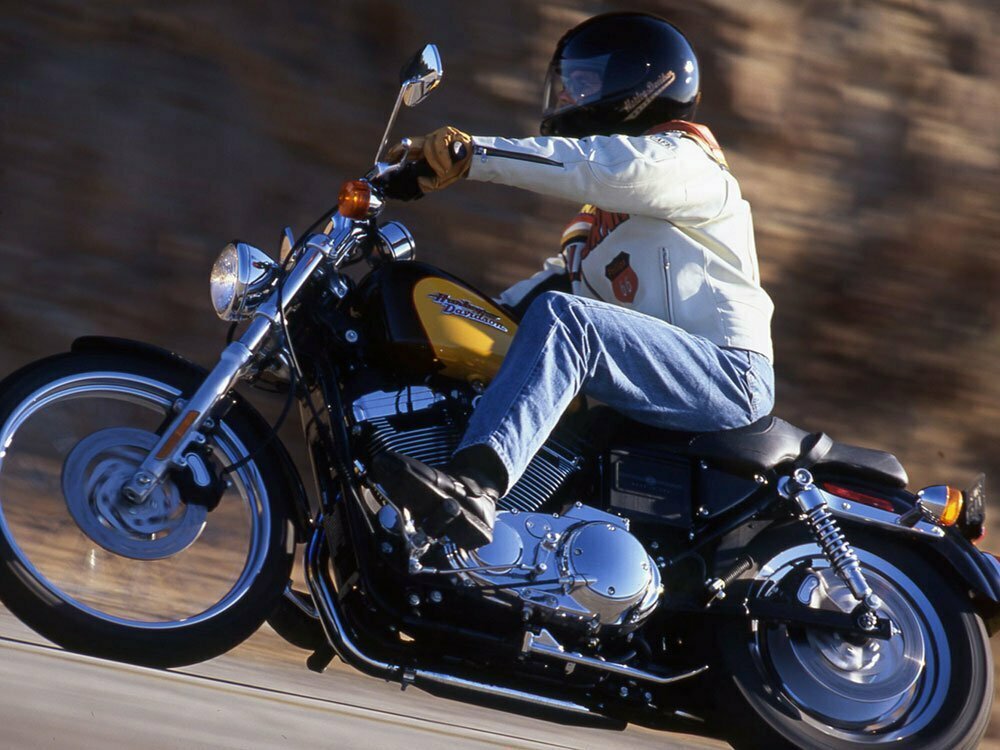 Although the Sportster has its vibration issues, the 2000 Sportster can still cruise comfortably and works better than any Sportster before it, with the exception of the 1200 Sport.

That also may explain why the 4.4-gallon tank fitted to the 2000 Custom at the time of its introduction last July didn’t make production. With mileage above 50 mpg, the 1200 has considerable range with the same 3.3-gallon tank as before; so, you could argue that, for non-touring purposes, it doesn’t really need a bigger tank. But that doesn’t take into account the fuel tank’s miniscule, 1/3-gallon reserve capacity. Go on reserve someplace in the wide-open spaces where gas stations are 40 or 50 miles apart, and you might as well use the remaining 15 or so miles’ worth of propulsion to find a nice, shady spot to spend the rest of the afternoon. Even if the bigger tank never materializes, Harley’s engineers should increase the reserve capacity so the bike has at least a 30-mile range after being switched off the main tank.

Overall, though, if the only things we could find to complain about are the higher-speed engine vibration and the fuel tank’s reserve capacity, the Custom must be one excellent Sportster. And it is. It takes everything that’s been good with Sportsters for more than 40 years and enhances those qualities, while minimizing some of the continuing complaints. Vi­bra­tion still remains an issue, of course, and will continue to do so until The Motor Company re­designs either the engine or the chassis. But over the years, gearing changes and some tweaks to the balance factor have continued to move the point of annoying buzzing higher, until this Sportster can cruise comfortably at legal highway speeds. So, in the areas of functional performance, it works better than any Sportster before it, with the exception of the 1200 Sport. And it looks cool as hell, too.

That’s not a bad way for a middle-aged mo­torcycle to enter the next century.

This article was originally published in the April-May 2000 issue of Cycle World’s Big Twin magazine. The 21-inch front wheel gives the XL1200C contributes to the custom look and the archetypal Sportster leanness.

With the new stroker flywheel installed, the cases were sealed and bolted together. Danny then pushed the stator plug through […]

Isn’t it funny how some people must announce it to everyone, every time they do something supposedly grandiose? How many […]

When you think of the type of reception these hooligans typically get from the cops, it’s no wonder they were […]

A View From Both Sides