The Sturgis Buffalo Chip and Kuryakyn are back at it again with a second powerful dose of “Rock, Rumble & Rebellion” to gear up for the annual August rally in the Black Hills of South Dakota.

“The Largest Music Festival in Motorcycling®” is now also the epicenter of all-things motorcycle racing, making the Sturgis Buffalo Chip the place to be for thrill-seeking adrenaline junkies. This year’s Buffalo Chip Moto StampedeTM showcases RSD Super Hooligan, American Flat Track Buffalo Chip TT, AMA Supermoto and the Street Drag Invitational with Crazy John, all of which will share center stage with some of the world’s top bands. To represent the festival’s hottest top-line events, Kuryakyn designed and built a one-off custom race-inspired machine to capture all the full-throttle action going down at the legendary campground.

Together with the Buffalo Chip, Kuryakyn will pull the cover off the brand-new 2017 Harley-Davidson® Street Glide® during the 30th annual Donnie Smith Bike & Car Show. Media members and attendees are invited to witness the unveiling, which will take place on the show’s main floor stage at the St. Paul RiverCentre on Saturday, March 25 at 11 a.m.

“Kuryakyn has presented another absolute winner,” said Rod Woodruff, Sturgis Buffalo Chip President. “The race theme and the flat-out powerful look of the new Mesh and Riot collections capture the excitement of all of the action taking place at the Chip this summer. The person who gets to own this beauty after its tour of the motorcycle event circuit this summer is going to be one lucky biker.” 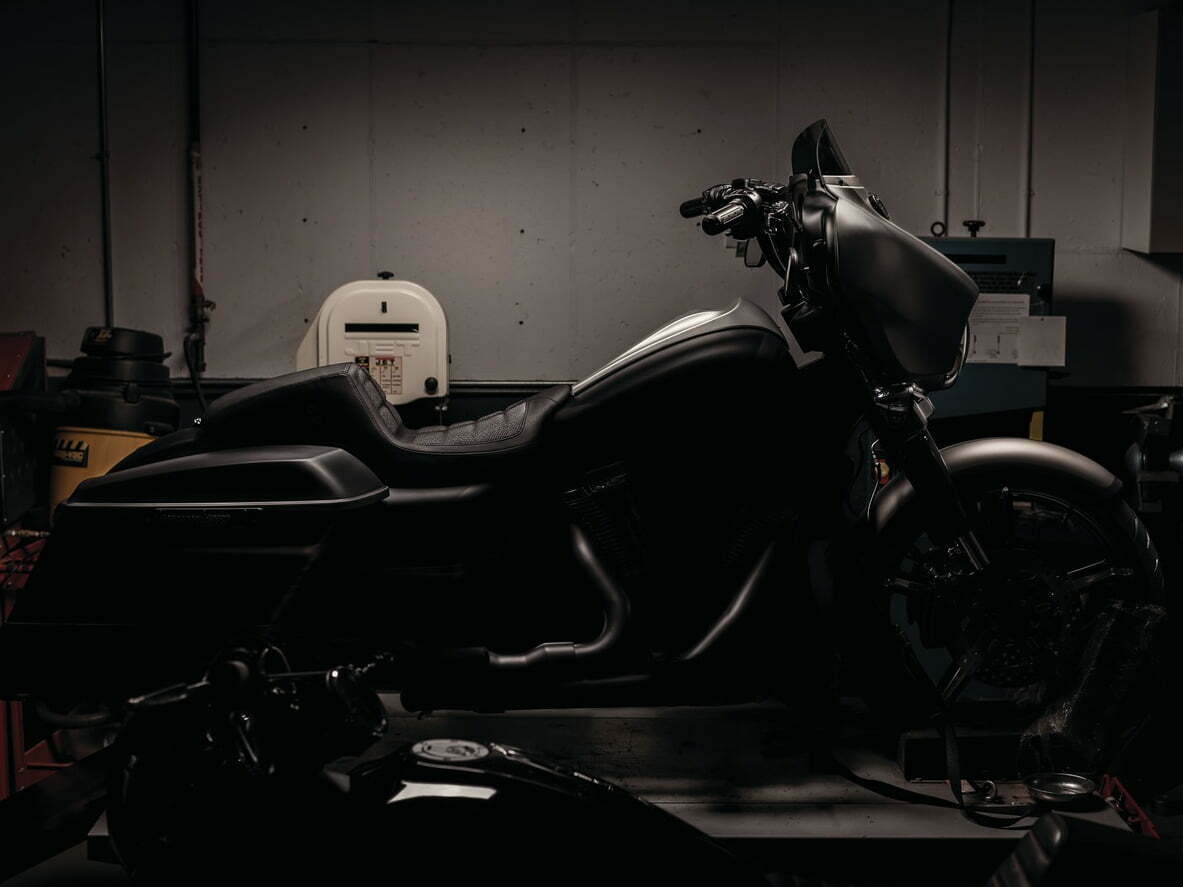 This bike’s looking a little shady…

“Once again we’re honored to represent the Sturgis Buffalo Chip through this signature bike build,” said Holger Mohr, Kuryakyn President. “Both brands personify the Rock, Rumble & Rebellion attitude. With street drag racing being one of the focuses for Rod and the Buffalo Chip team, we executed a design that balances the quintessential rawness of performance with the refinement of quality off-the-shelf Kuryakyn products. It presents the perfect medium to showcase our Crusher Performance Division, the new Mesh and Riot product collections, and also introduce the evolution of one of Kuryakyn’s most iconic products, the Hypercharger. The fact that we get to debut this bike in the Twin Cities, just a short ride from our headquarters in Somerset, makes it even more special for our team.”

The bike will be offered for sale as it makes appearances at various events across the country. It will be on display at Black Hills Harley-Davidson in Rapid City, SD in July and will be available to go home with its new owner after appearing at the Buffalo Chip in August. Anyone interested in purchasing the bike may call the Sturgis Buffalo Chip at 605-347-9000.

About The Sturgis Buffalo Chip

The Sturgis Buffalo Chip® is the Largest Music Festival in Motorcycling®. It is the world’s first and leading entertainment destination for the motorcycle enthusiast and 2017 South Dakota Excellence in Tourism Innovation award winner. Since 1981, the venue’s high-profile, nine-day festival, known as The Best Party Anywhere®, remains one of the world’s most televised and longest running independent music festivals. Located three miles east of Sturgis, SD on 600 creek-fed acres, it offers eight stages of entertainment, a swimming hole, bars, mouth-watering food, showers, cabins, RVs, camping and more to visitors traveling from all corners of the world. The Chip’s concerts are free with camping. More details are available here.

Kuryakyn has been leading the design and manufacturing of aftermarket parts and accessories for the motorcycle industry for the past 28 years. Our ideas are products of expressive minds that realize a motorcycle isn’t simply a means of transportation, but rather a representation of a person’s very identity. We are dedicated to producing innovative parts and accessories that keep us miles ahead.

Yes, it’s true. Robert “Evel” Knievel’s dream of creating a museum to “house his life’s memorabilia” is now a reality. […]

How to Use S&S Cycle’s Oil Change Kit