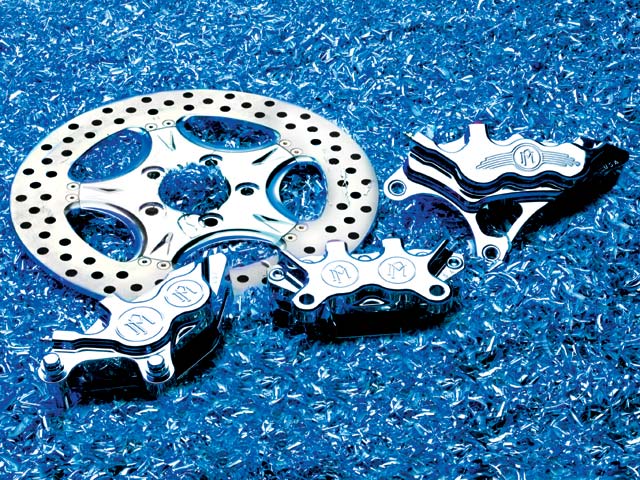 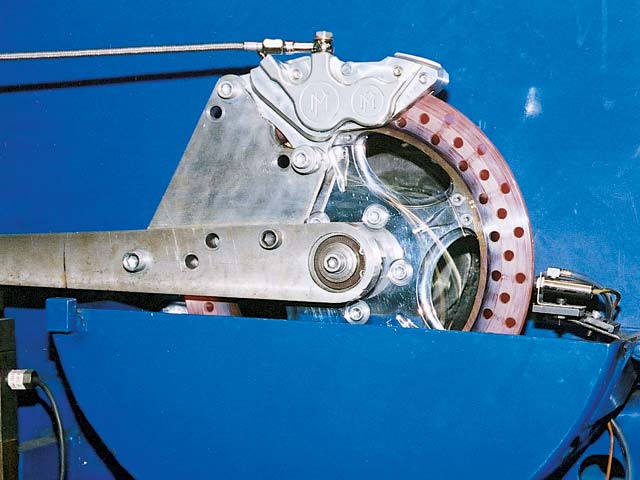 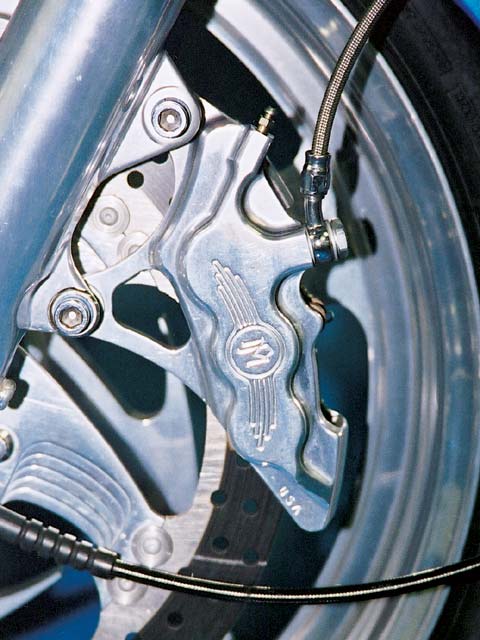 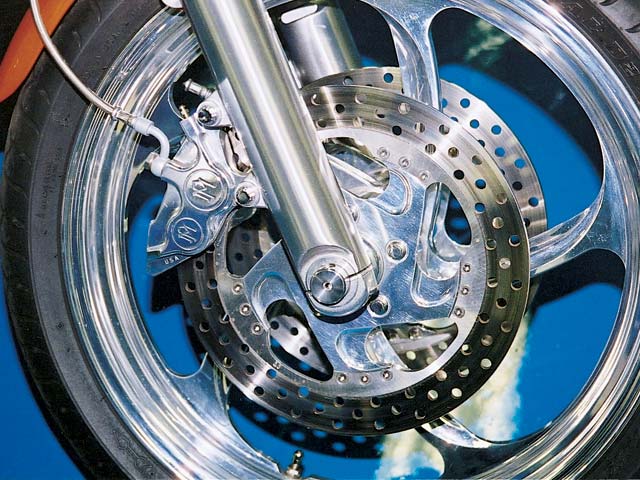 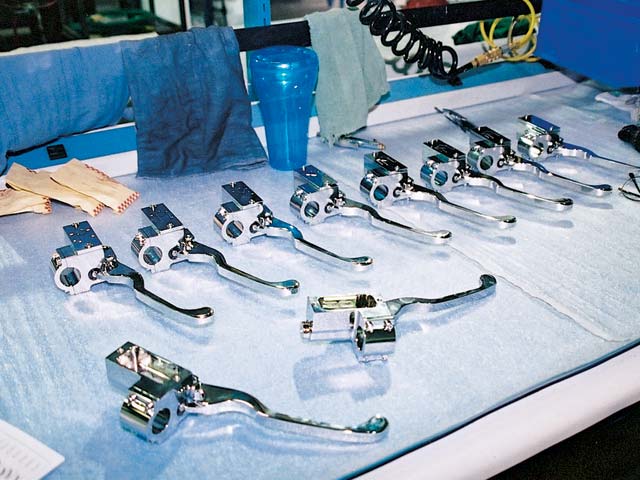 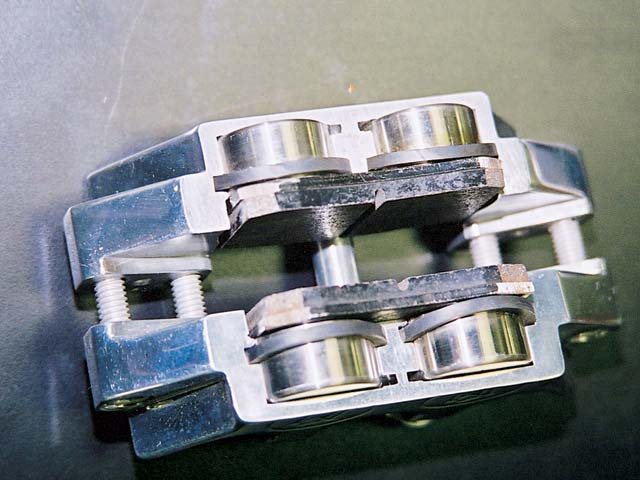 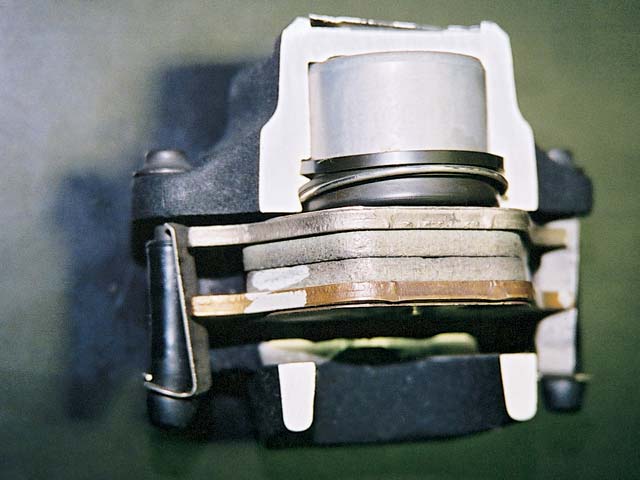 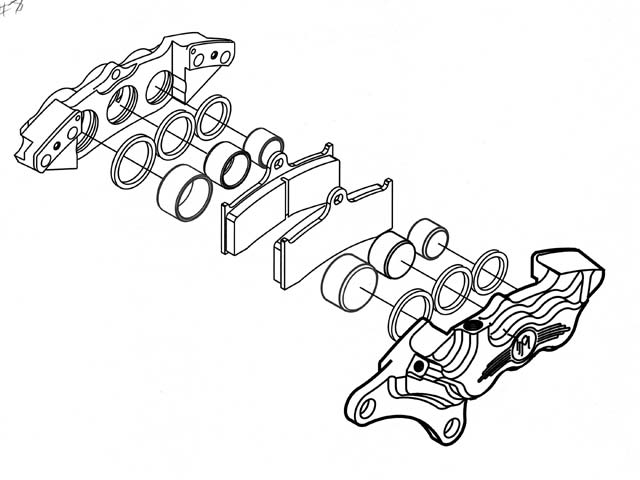 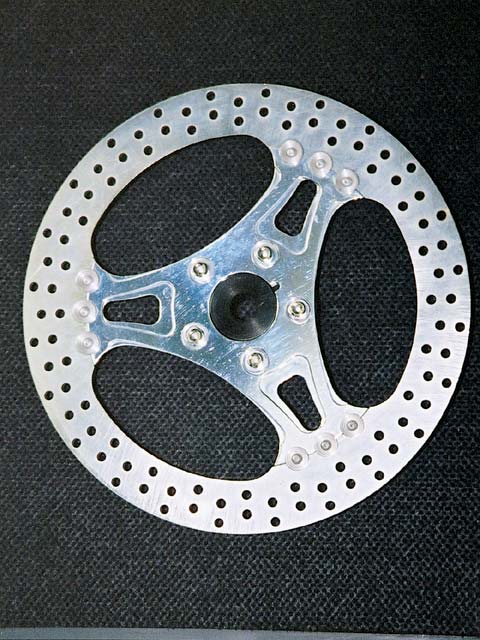 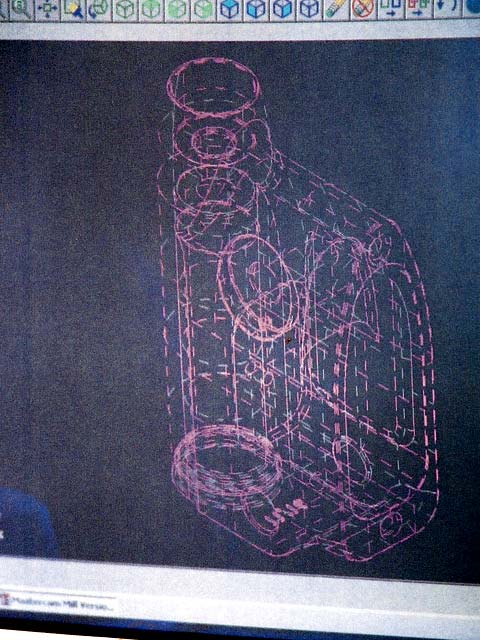 The process starts with a 3-D rendering of the design on a computer.

Here is a computer simulation of the machining process.

CNC stations, such as this one, precision machine P.M.’s calipers.

Here, we see the milling machine turning raw metal into a cool caliper.

When people start hopping-up their bikes, they usually think in terms of going faster and having more power. Sometimes they fail to realize that it takes more power to stop all of those extra ponies; they’ll ignore changing to high-performance brakes or save the modification for later. After all, any calipers and rotors will stop your bike; they’re limited by tire grip. Right? True, to a point, but high-performance brakes do provide better braking. To find out why, we met with Perry Sands at Performance Machine. P.M. makes brakes for almost any bike on the market, and they have a ton of braking knowledge as well.

To put it simply, braking is the conversion of kinetic energy (motion) into thermal energy (heat) through friction. When your brakes are applied, the pads come into contact with the rotors that are spinning at the same rate as the wheels. The resulting friction slows down the bike while heating up the brakes. Under normal riding conditions, the heat is dissipated into the atmosphere along with microscopic particles of the rotors and brake pads.

Heat is also important for the tires during braking. Since tires are made of rubber, and rubber is temperature-sensitive, the hotter the rubber becomes, the softer it gets. Normally, this is a good thing because as the rubber softens, it becomes more adhesive. The problem is, tires have finite adhesion. The adhesion limit is reached when the tires get as soft as possible before excessive heat causes the rubber to liquefy and lose grip. The liquid rubber acts as a lubricant instead of an adhesive and your motorcycle goes into a skid.

Friction also comes into play with the tires. When the brakes are applied, they create a resisting torque that grows progressively until it matches the torque created by the friction force between the tire and the road surface. Once the two forces are equal, the tires exceed maximum adhesion, the bike begins to skid, and the brakes lock up the wheels. Since the friction between the road and the tires places a limit on the available braking force to stop a bike, once the two forces are equal, the brakes can’t develop more resisting torque. By exerting greater braking force more rapidly than OEM brakes, better brakes create resisting torque faster than their stock counterparts, thereby slowing the bike down more quickly as well.

High-Performance Brakes: Why Are They Better?

According to P.M., a 30- or 40-percent increase in raw hp will result in a 100-percent increase in heat at the braking surface if you use the power. It’s a fact that the faster you go, the more force is needed to stop in a timely manner and the more heat is generated in the process. Stock brakes are designed to dissipate stock performance generated heat before they begin to lose effectiveness. However, when the brakes generate more heat than they can shed, the pad material begins to vaporize (brake fade).

Better brakes, on the other hand, are designed to handle the high amount of heat generated by non-stock motorcycles and aggressive riding conditions. They also generate more braking force and disperse heat more efficiently. Let’s look at P.M. brake systems to see how they work to produce better braking.

A Good Feel at the Lever

P.M. defines good lever feel as progressive in nature, i.e. the movement of the lever will directly correspond with the amount of braking at the caliper; a small amount of lever movement results in a small amount of braking at the caliper. A system that applies a large amount of braking force in a short amount of lever pull is difficult to use and potentially dangerous. The lever should be powerful, yet comfortable to use. P.M. levers are made so that the rider can use two fingers to use over half the potential lever travel to achieve maximum braking — anymore travel puts it too close to the grip. Lever position in relation to the grip is also important since it brings ergonomics into play. In any event, the better feel you have at the lever, the easier it will be to control pressure at the caliper.

Breaking Down a Brake: Calipers

Older (`99-and-earlier) OEM calipers, such as the one on the right, have one moving piston that concentrates its force on a small area of the rotor, which creates hot spots and potential brake fade. By using more pistons, P.M.’s four- and six-piston calipers spread the pressure of braking force over a larger area of the disc, thereby reducing hot spots and increasing braking power. Later OEM brakes use four pistons with larger pads but still aren’t as efficient as P.M.’s.

Further refinement in the P.M. caliper can be found in the form of differential bore pistons. This racing-inspired technology was developed in response to excessive pad wear at the entry point of the disc. The greatest heat concentration on a pad can be found at this point and is responsible for uneven pad wear and less-than-impressive braking. By incorporating a smaller piston at the disc entry, and a larger one at the exit, the pad-to-disc contact is significantly more efficient. This design not only controls uneven pad wear, but also keeps the entire pad surface at a constant friction level for more efficient contact on the rotor when the brakes are applied. The result is increased braking power without increased heat.

The most common form of thermal dissipation found on motorcycle disc brake systems is cross drilling — a series of holes drilled in a pattern on the braking surface of the rotor, which help dissipate super-heated boundary layer gasses generated by braking, thereby reducing rotor temperature. Using a larger diameter disc — such as a 13-inch rotor — also helps braking. Maximum braking force comes from the point furthest from the center of rotation. So, the further the caliper is from the center, the easier it is for it to stop the rotor. The additional material in a larger disc also aids in diffusing heat over a larger surface area. If you do a lot of canyon riding or two-up touring, floating rotors may be the ticket for your bike. When the brakes are applied, the rotor expands as it heats up and contracts as it cools down. Floating rotors, with their two-piece construction, allow for greater expansion and contraction than normal single-piece discs. Therefore, floaters can handle more heat without warping.

Performance Machine makes the most popular custom brakes in the country. The company tests each design extensively before it’s approved for manufacturing.

Put to the Test

We’ve looked at the theory behind high-performance brakes, but the proof is in the practice. P.M.’s brake dyno provides a great closed environment for comparing one of its four-piston caliper and rotor setups with a four-piston Harley combo. P.M. tested both sets under three simulated speeds: city streets (32 mph), freeway (63 mph), and high speed (97 mph). Each speed was tested twice under two different braking conditions: once with 100 psi of line pressure applied to simulate gradual braking, and once at 300 psi to replicate aggressive braking.

The tests measure the time it takes to stop at the preset line pressure, the average friction coefficient between the pad and the rotor during braking, as well as the simulated distance traveled in feet from the time the brakes are applied until the system comes to a halt.

In all of the tests, the P.M. system stopped the rotor in less time, with a higher coefficient of dynamic friction, and over a considerably shorter distance than the four-piston factory setup.

The aftermarket has all kinds of ways to make your bike go faster; but when you power up your motor, your brakes work a lot harder and wear out much faster. High-performance brakes are made to handle high-performance power. That’s why better brakes produce better braking.

‹ Drag Specialties Sweepstakes › A Birthday Party: 100 Years In the Making

When the guys at Darkhorse Crankworks (DHC) receive a lower end, they take the time to evaluate both the engine […]

The inspiration for custom motorcycles varies in meaning from person to person. Some people might see a movie that changes […]

Looking for a new exhaust for your Harley or custom motorcycle? Vance and Hines 2010 product catalog is now available […]