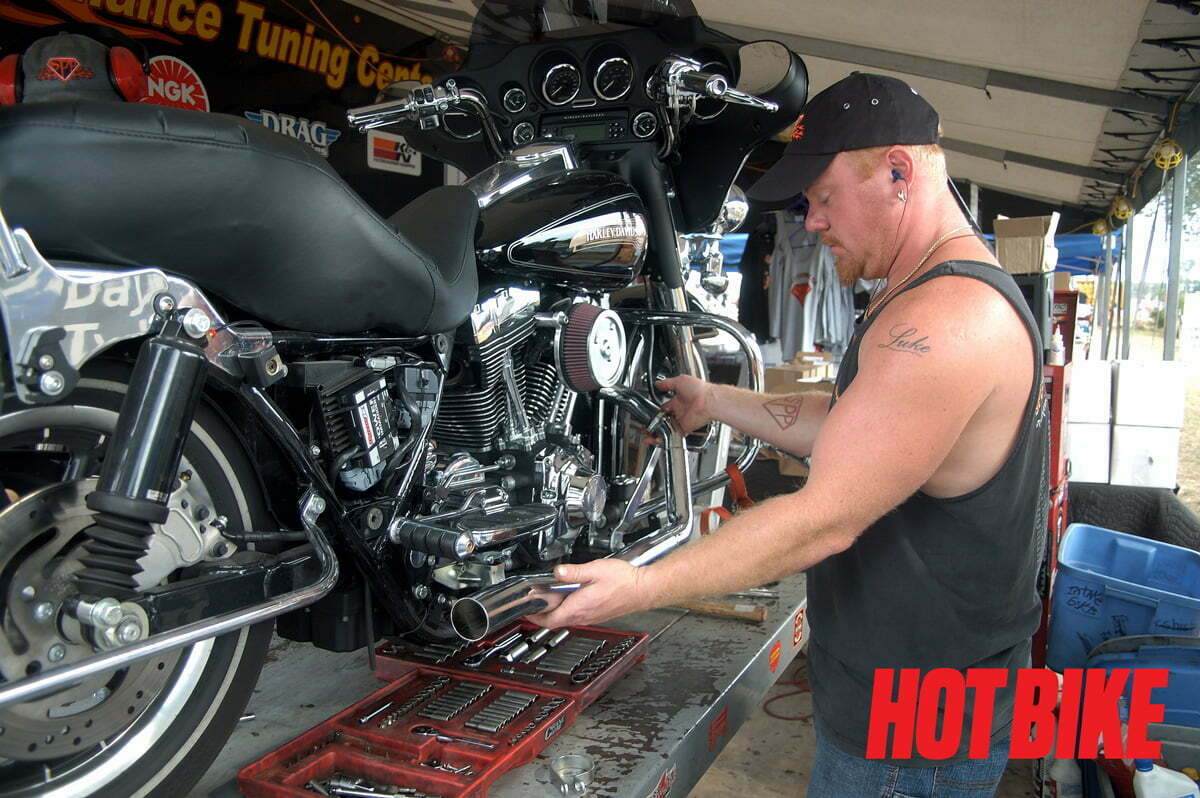 As good looking and nasty sounding as a set of short, wide-open pipes might be, they’ll end up hurting the all-around performance of a street-ridden Harley. Sad but true. But there are still plenty of riders who just like that look. And there are riders who simply want noise—the more of it the better. Fair enough, as long as all those riders also know that looks and sound alone rarely translate into rideability and performance—unless the riding begins at the starting line of a dragstrip. Short, wide-open pipes can make sense there, sometimes increasing top-end performance. “But most bikes that come to our dyno are all done making their horsepower and torque by about 5,500 rpm,” says Speed’s Performance tech Jamie Hanson. “Yet riders still ask us to raise the rpm limit up to 6,500 or more. Why? All they’re doing is revving the life out of the engine for no good reason. Why not just shift gears and move on?”

Bottom line: While it might intuitively seem that noise equals power, the two don’t necessarily go hand in hand.

While it might intuitively seem that noise equals power, the two don’t necessarily go hand in hand.

In fact, Jamie explains, the most off-idle torque you’re likely to see can happen with a completely stock and whisper-quiet factory exhaust system. No kidding. All that noise-canceling backpressure will build tons of torque. Of course, by 1,500 rpm or thereabouts that advantage is gone, and the restricted system becomes a severe detriment. But the point is that noise doesn’t always equal power. Now, we’ve spoken with the SPP guys often enough about recommendations for an all-around performance exhaust, and the answer has always been the same: a good 2-into-1 or a connected true dual. That being said, there are all those riders in love with their short, drag-style pipes. That’s understandable; it’s been part of the Harley-Davidson mystique forever. Given that, is there anything that can be done to improve the all-round street performance of an exhaust like that—anything that’ll make those short, loud pipes work the best they possibly can?

“Well, the first step is to put the baffles back into the pipes if they’ve been removed,” Jamie explains. Most of those short, custom pipes are supplied with a removable baffle, and for best performance that baffle belongs right where it was designed to mount. The low- and midrange performance difference between baffled and un-baffled can be significant—15 foot-pounds of torque or more right at the bottom end where it’s needed most. Use the baffles, Jamie says. And in cases where the pipe was supplied without a baffle, SPP can install its own, the SPP Power Cone. In either case, manufacturer-supplied baffles or the Power Cone, the purpose is to create just that bit of backpressure needed to produce torque and combat the power-robbing reversion wave, which will occur in a completely un-baffled pipe up to about 3,000 rpm or thereabouts. Without getting overly technical, reversion is the flow of exhaust gasses back into the combustion chamber,

a phenomenon caused by the downward movement of the piston creating a vacuum in the cylinder exactly timed with the initial opening of the intake valve as the exhaust valve is still open. Exhaust gases are sucked back into the combustion chamber, displacing some of the fresh fuel/air charge. In extreme cases, where the cams have a wide overlap, for instance, you might even see a mixture of those gases, exhaust, and fresh charge blown right out the mouth of the carburetor or throttle body. Hence the need for those baffles or Power Cones.

“And in our experience, we’ve found the most productive location for that baffle or Power Cone is back towards the end of the pipe,” Jamie says. True, some “anti-reversion” cones are designed to drop into the front of the head pipe, right outside the exhaust port. “But we feel that positioning is detrimental to flow,” he says. “To get maximum all-around performance you want an engine to breathe, and restricting exhaust flow right from the start, we’ve found, slows things down.” Granted, either positioning, at the port or back toward the tip of the pipe, produces the required backpressure and anti-reversion, but decades of dyno-testing has led the SPP guys to favor that latter positioning, letting the exhaust gases get out of the engine as fast as they can and travel the length of the pipe before contacting the baffle or Power Cone.

Still in love with those short, loud pipes? No one can blame you. They look cool and sound great.

They look cool and sound great.

But will they ever duplicate the all-around performance of a quality 2-into-1? Unfortunately, no. It won’t even be close, and now you’ll know why. Stop in and talk about all this with the guys at Speed’s Performance next time they’re in your area. The schedule is on their website.

Picking up where we left off with the sprocket. Words and Photos: John Zamora In part one of this story, […]

Shovelhead Chopper | Summer of `69 Words and Photos: Fingers The year was 1969 and I was just an innocent […]