How custom do you want to go? That’s the first question I think anyone should answer when entertaining the personalization of a motorcycle. If you don’t know how deep down the rabbit hole you want to go, it can turn into a cash-sucking sinkhole on the quick. Having an idea of what you want beforehand is almost always the way to go*, both for you and your wallet. You can always start mild and go wild later, right? Or, as in the case of Gary Hopper’s machine, you do both at the same time. This bagger is a great example of knowing what you want before undertaking the customization journey. Every rider has their own ideas about what works best for them in a bike, from stock to crazy wild. In Gary’s case, he was pretty happy with his stock bagger and only wanted a few changes here and there to make it stand out without sacrificing the ride quality he enjoyed.

The finished bike is a 2010 Harley-Davidson Road Glide, measuring 96 cubic inches in the displacement department. ‘“Mild’” is also a suggestive term in the custom world. Gary kept the Twin Cam powerplant stock Harley-Davidson; if it ain’t broke, don’t fix it, right? It seems Hopper favored reliability over running a street-legal drag racing mill ‘twixt his frame rails. A lot of changes were made to the bike; they just weren’t on the extreme end. When he brought the Road Glide to Martin Bros Customs, Gary Hopper wanted select tweaks with a focus on a stand-out custom flame job and that’s exactly what the shop gave him.

*Unless what you want sucks and you come to your senses later. Yeah, I’m looking at you, boy- band theme bike. 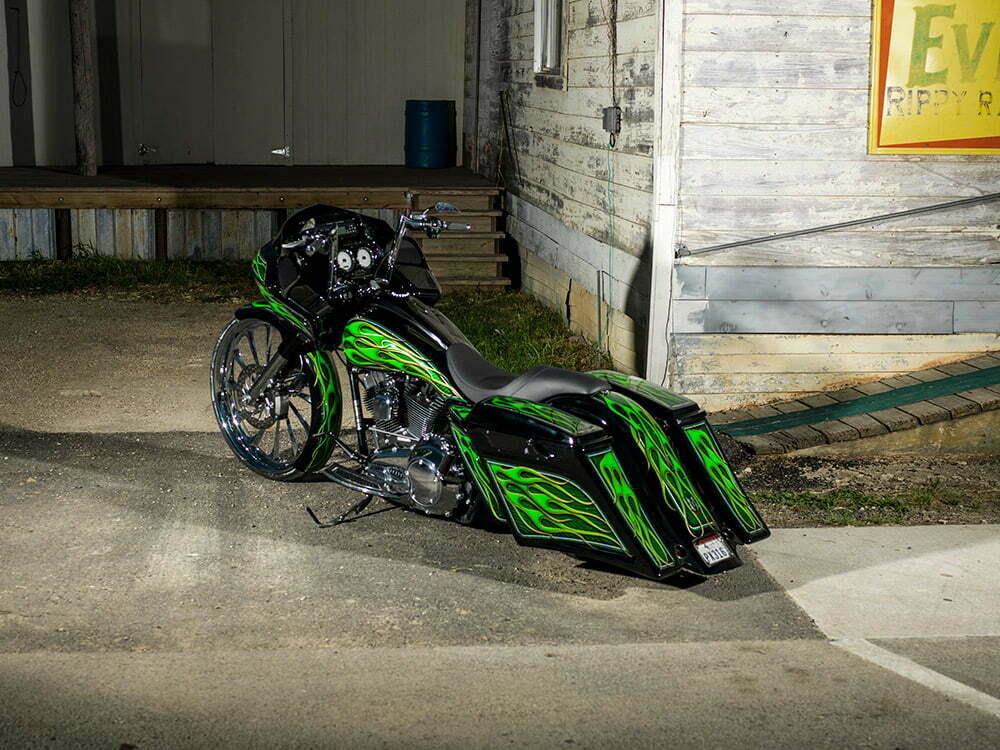 Apes, a larger front wheel, and the rear fender/saddlebag combo were among the other tweaks Hopper called for in his finished custom. 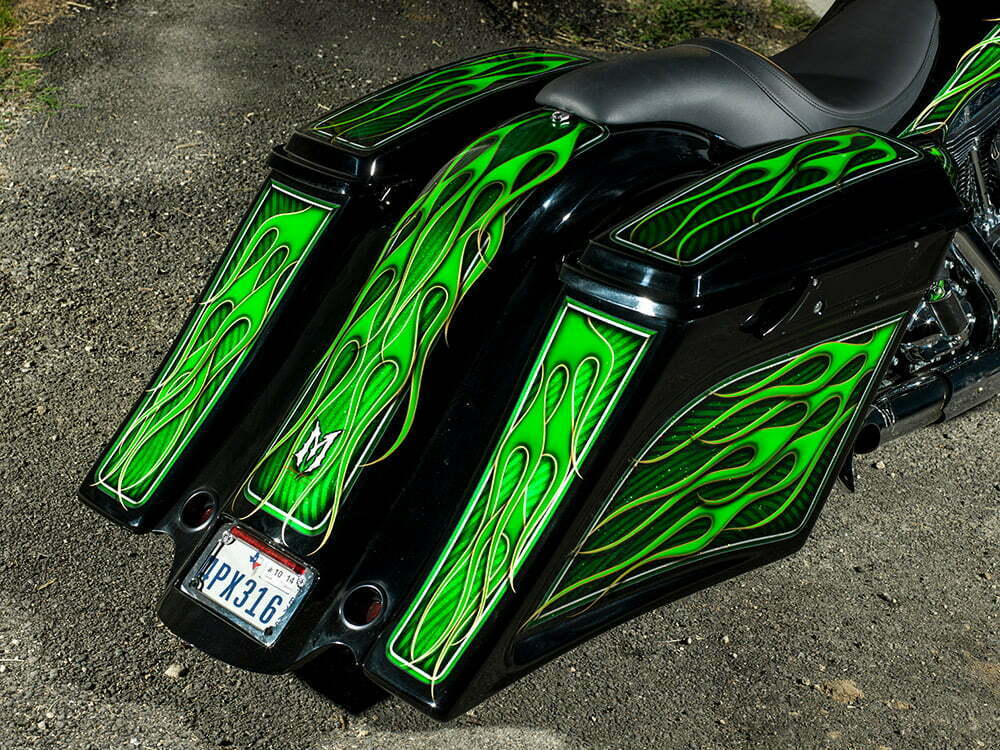 The overall painting battle plan called for black broken up by panels of all kinds of green. Metalflake, airbrushing, stripes, and, of course, fuego. It would seem the fire isn’t content to stay in the box. Having it bust out from its confines keeps the panels from being too restrictive. 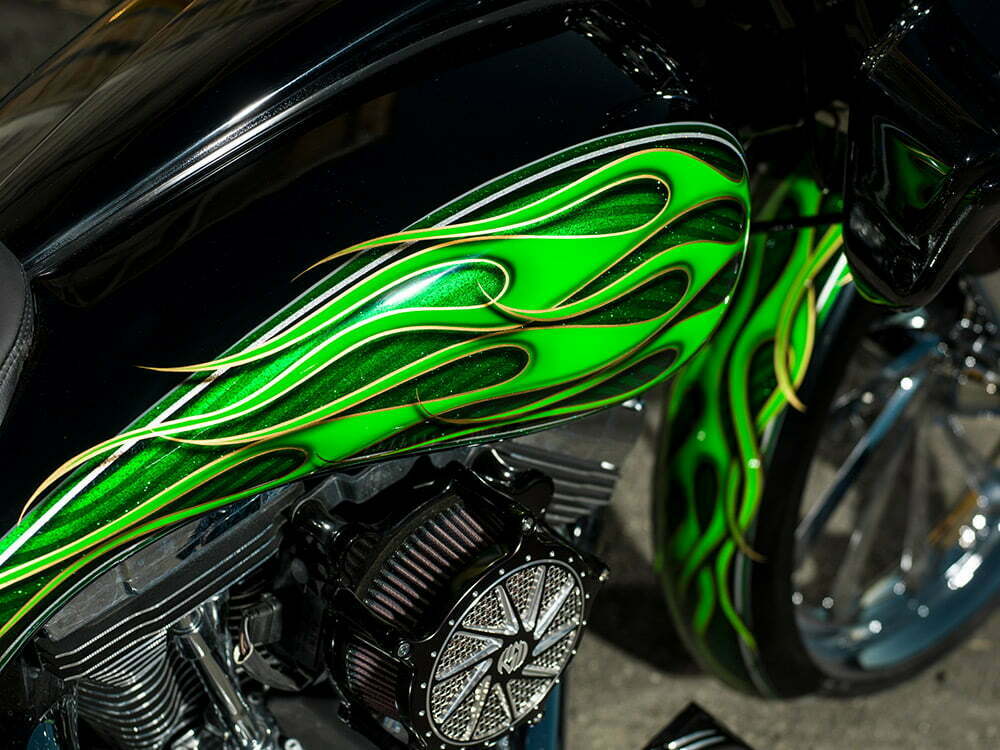 Check out how the stripes on these flames transition from gold to white and back again. Evidence that wild didn’t mean a pavement-shaking stereo system for this bike. Exhibit A: no speakers in the bag lids. 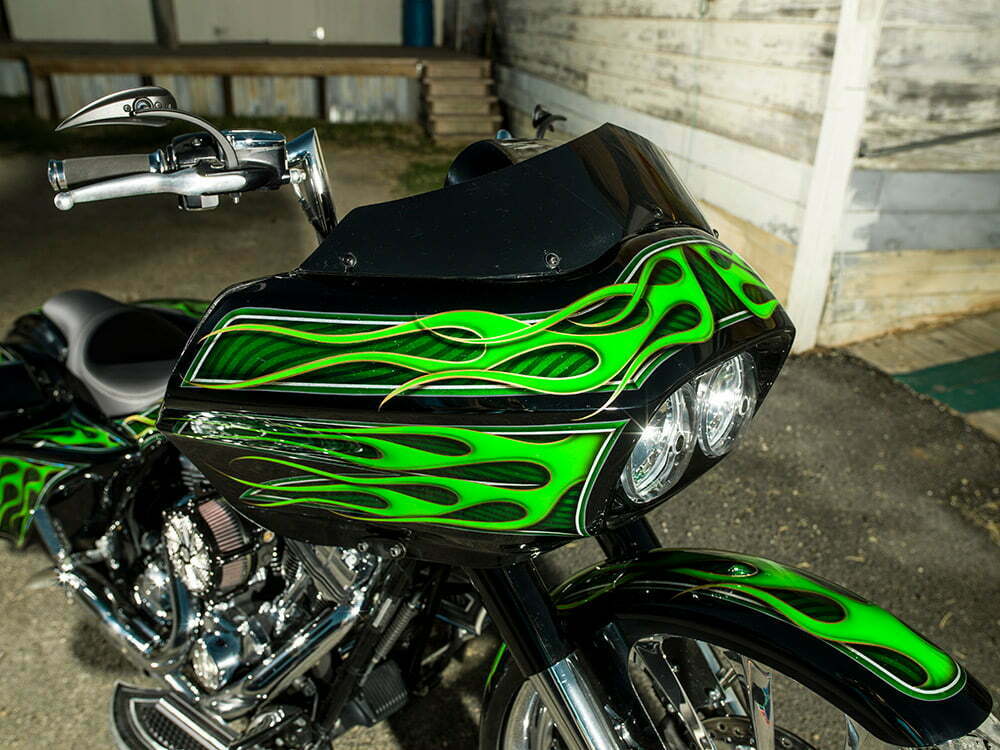 Curves and points were central to the design, whether Gary realized that or not. The flames, windshield, bars, and mirrors all bear that out. 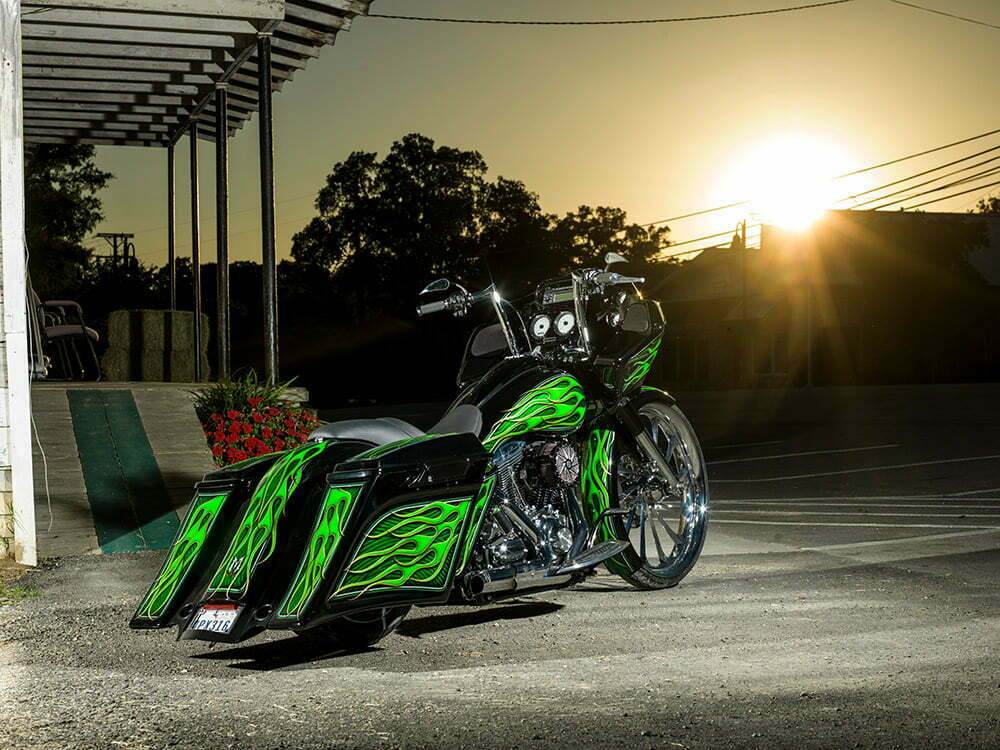 Not a bad horse to ride off on into the sunset..

‹ Bluebonnets, Brisket, And Bluegrass—A Day In Texas Hill Country On The 2018 Harley-Davidson Fat Bob › Riding Baggers With Mountain Bikes In Tow To Sturgis

When it comes to making power, the sky’s the limit regarding the different avenues that can get you there. In […]

Our sitdown with the former Hells Angels chapter president and mind behind Outlaw Chronicles: Hells Angels, George Christie. Courtesy of […]

Together, 27-year-old Nik Heer and 22-year-old Fabian Witzig will transform this Scout to race at some of the Essenza sprints […]