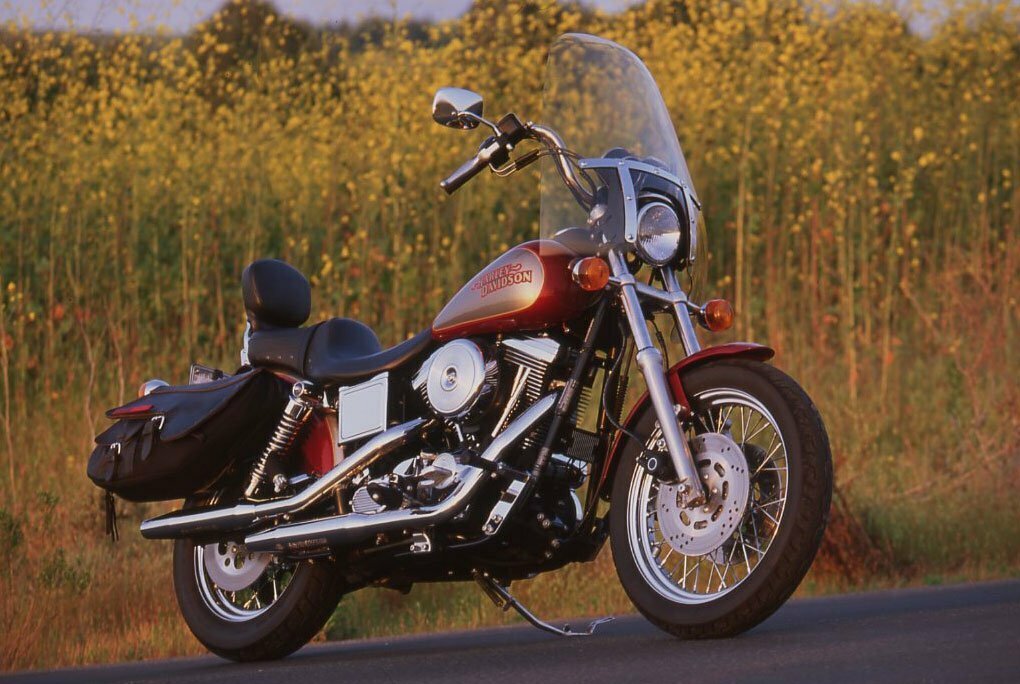 Quick modifications are easily made on the 1997 Harley-Davidson Dyna Convertible thanks to the detachable windshield and saddlebags.

This article was originally published in the June-July 1997 issue of Cycle World’s Big Twin magazine.
There’s no question who is the ultimate arbiter of new-bike design at Harley-Davidson: Willie G. and Louie Netz in the styling department swing the big stick. Harley’s engineers may know that longer suspension travel will produce a better ride, that a bigger airbox and mufflers will produce more power, or that a particular frame design is stronger and lighter than an alternative; but if that “superior” design doesn’t produce The Look, that all-American-Harley image the styling department wants to create, it will rarely find its way into production.

Of course, the engineers have won a few of those battles over the years, victories that may have cost them the war. Back when Erik Buell still worked at Harley, for example, he headed up the team that gave us the FXRT, a bike that worked much better than it looked, but looked much better than it sold. And the FXRS Sport was conceived in part to support the function-over-styling preferences of engineering types; from a sales standpoint, though, it barely managed a few infield singles while Softails and other styling-intensive models were hitting them out of the park.

Which brings us to the Convertible. The first model to bear that name was based on the FXRS, and it arrived just as the FXRT was departing the Harley line. That original Convertible was designed to give sport-touring Big Twin loyalists a place to go, but in a more conventionally Harley-looking package. It not only had a “sport windshield”—Harley parlance for a Plexiglas windbreak bolted to the fork—but that screen and the classic-looking soft saddlebags were quickly removable. It was a cross between sport-touring and cruising, a quick-change artist that could be a clean-looking cruiser one minute, a backroad tourer 10 minutes later. And it was far more warmly received by the buying public than the FXRT.

It offers the possibility of virtually instant conversion from be-widowed and saddlebagged touring mount to bare-bones classic cruiser.

So, when the FXR rubber-glides gave way completely to the Dyna series, it was certain there would be a Dyna-based Convertible. But maintaining its “Sport” heritage would require some performance changes in the Dyna chassis, particularly to the steering-head angle.

Fortunately, those changes came rather easily, because when H-D engineer Rit Booth de­signed the Dyna chassis, he intended it to have more production-line versatility than the FXR chassis. So, the Dyna’s entire steering head was built as a one-piece steel in­vestment casting that plugs into the frame backbone and downtubes, and that can be welded in place with a lot less effort than required for the FXR frame. More importantly, the Dyna frame jigs were designed to accept different steering-head castings as a matter of course. So, it was easy to give the Convertible (and the base Dyna, the FXD) a steering head that pulled the rake down to 28 degrees compared to the 32 of the other Dyna models. The steeper rake also reduced front-wheel trail, down to 4.0 inches from the desert-sled 5.1 inches of the current Dyna Low Rider, for instance. 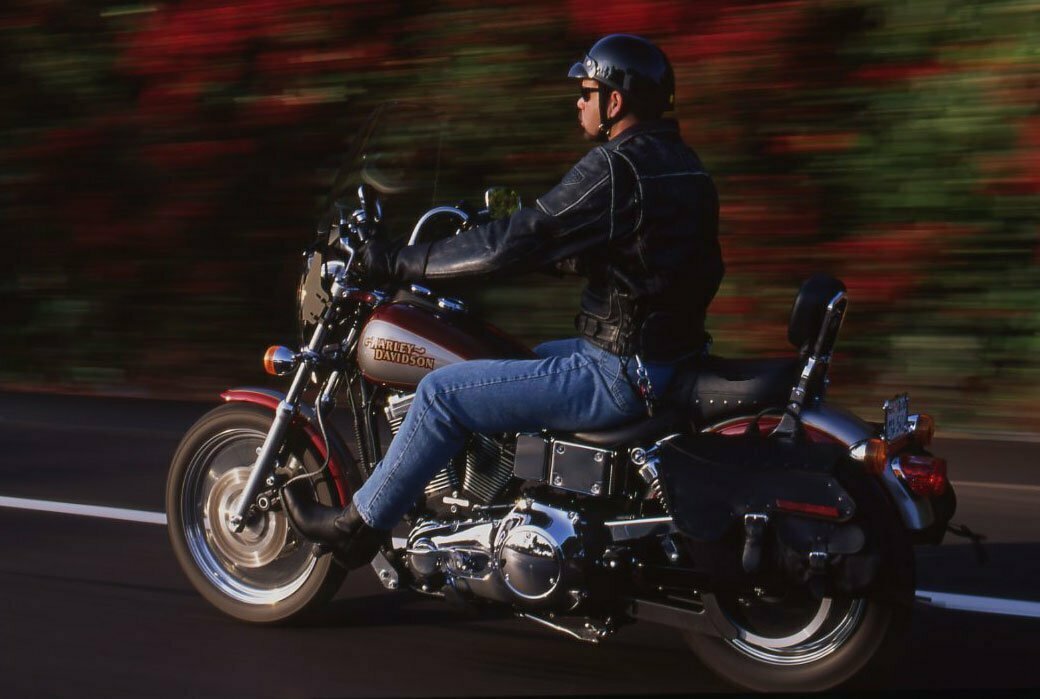 The Dyna Convertible makes for a good ride when you hit some rough road.

You can notice the quicker steering on your first ride aboard a Convertible. At low speeds, the steering tracks true, not falling into the corner the way the more raked-out models do. And at higher speeds, you don’t have to use as much muscle to turn the bike into a corner. It’s not that the steering has become hyperactive—the FXDS is still un­flappable down endless straights and interstates. It’s just that it likes to turn, trading away a tiny bit of the locomotive stability of the more cruiser-oriented Dynas for a much larger increase in agility.

If you happen to be a hard-cornering rider, you’ll quickly notice the other significant difference in the Convertible’s chassis. Pitch the bike into a turn quickly enough that other Big Twins would leave steel and aluminum on the pavement, and the Convertible arcs through as if on a tether, without any nasty, grinding, abrasive sounds.

Why? Because it sits higher on its longer-travel suspension than do the other Dynas. According to the Motor Company, the Convertible has 4.7 inches of rear-wheel travel, and 6.9 inches in front. That lifts it enough that it can lean 5 degrees farther than the lower-slung Dyna models before hard parts touch down.

Of course, the seat is raised, too; at 27.8 inches, the Convertible’s saddle sits some 1.2 inches higher than a Dyna Low Rider’s. The longer suspension also makes for better bump absorption and a better ride. So, even if you aren’t pretending to be Chris Carr taking a Big Twin into Daytona’s Turn One, you’ll appreciate the way the Convertible can roll over a city-street drainage channel or a big pothole without hammering shock waves up your spine.

On the road, there’s a lot else to appreciate about the FXDS. Like all other Dynas, the rubber engine mounts produce outstanding smoothness at highway speeds; the engine may be buzzing away at 75 mph, but none of that shaking makes it through those mounts to you.

Ergonomically, the Convertible is equally pleasant. With your feet out on the highway pegs, you’re in a comfortable cruiser slouch. The buckhorn handlebar leans you back slightly and places your hands at a natural angle without requiring any bend in your wrist. The back of the seat is high enough to give you a smidgen of back support, and the screen parts the air efficiently enough that you could easily imagine traveling from Harley’s museum in York, Pennsylvania, to Daytona in one very long day’s ride if you were so inclined. The tall windscreen can be adjusted for height and angle, or removed altogether—with only a single Allen wrench. There’s enough adjustment to let you set the screen so you can just peer over the top of it, or so you can look through it. The former is our preference, but it exposes you to turbulence whirling past; the latter leaves you trying to peer through water drops in the rain and some distortion around the upper edge. 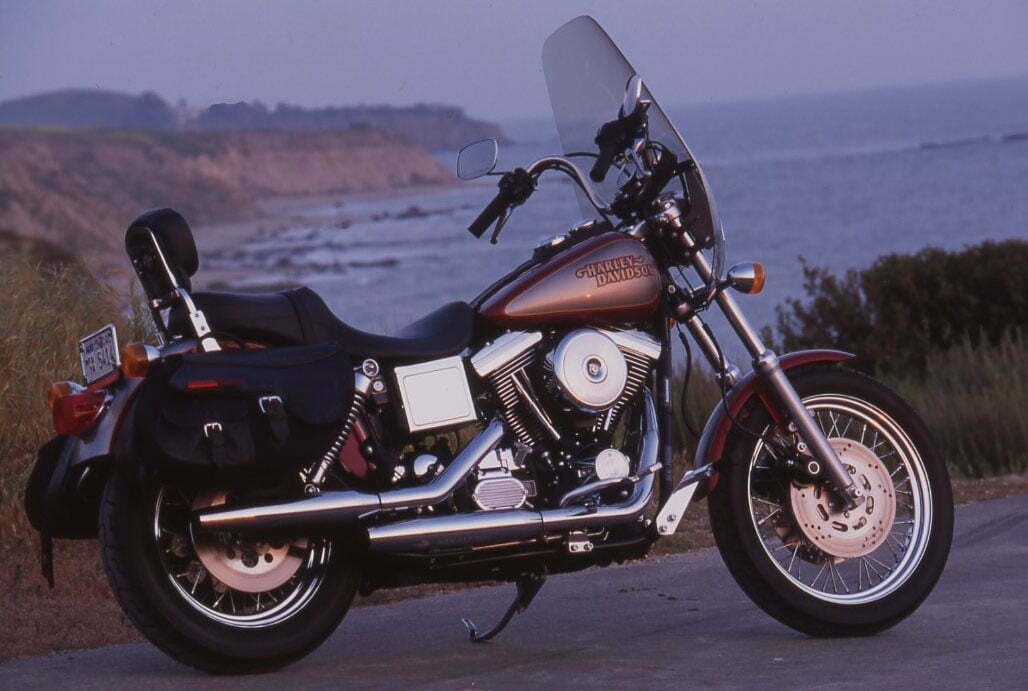 The other part of the touring equation, the saddlebags, requires only the loosening of a thumbscrew for removal; you can whip them on or off in seconds. And although they may look like classic Pony Express pouches, these bags have been designed as true hybrids, with a hard-plastic back and metal frame connecting them to the bike. The woven nylon outer cover opens with a zipper, and that is covered with a cosmetic leather flap held down with a massive buckle and a single snap. While the leather cover gives the bags a classic look, it’s about as purposeful as propellers on a 747; the flap and the buckle serve mainly to slow access. Chalk one up for The Look over convenience.

When it comes to engine performance, chalk one up for the Government. Current noise regulations thoroughly strangle the Dyna’s Big Twin in stock form, and it cries out to be uncorked. The injected motor in the FLs would be at home here, and provide better performance and livability—but at the expense of limiting your hot-rodding op­tions.

It would be nice if The Motor Company gave you the choice, but that’ll probably have to wait until the designers find some way of shrinking the bulky black-box control unit required by the injected engine. Once the Convertible gets rolling, however, the dual-disc front brake is capable of bringing it to a quick, easy sure stop from any speed.

So, in the end, the Convertible serves its function-with-style role well. As Louie Netz notes, Harley’s “more-functional bikes have been overshadowed by the rapid growth in the custom and nostalgia areas, and by classic touring bikes. But they have loyal followings, and we want to continue to satisfy those niches.”

For anyone desiring a good-handling, good-riding Big Twin that isn’t penalized by excess weight and can cover a lot of territory comfortably, the Dyna Convertible is the an­swer. It also offers the possibility of virtually instant conversion from be-windowed and saddlebagged touring mount to bare-bones, classic cruiser.

That’s a skill worth having, a niche worth filling, and the Convertible does it well.

The RSD Mojave boots right out of the box. Ed Subias Buy I received a pair of Roland Sands Design […]

2008 Custom Panhead – One For The National Motorcycle Museum

This ’08 custom Panhead may be the National Motorcycle Museum’s right now, but it could be yours. Read the story […]