Keino Sasaki is originally from Japan but has lived in New York City for more than 20 years building his brand of custom motorcycles. When Keino landed on these shores he had a chance to meet with the infamous builder Indian Larry. Their relationship evolved fairly quickly, and, along with the legendary metalsmith and leatherworker Paul Cox, Keino found himself part of Indian Larry’s Grease Monkey Garage building some of the greatest purpose-built choppers the world had seen.

After Larry’s untimely death in August 2004, Keino opened his own shop a little while later in Brooklyn, New York’s Red Hook district known only as Keino Cycles. And the rest, as they say, is history. 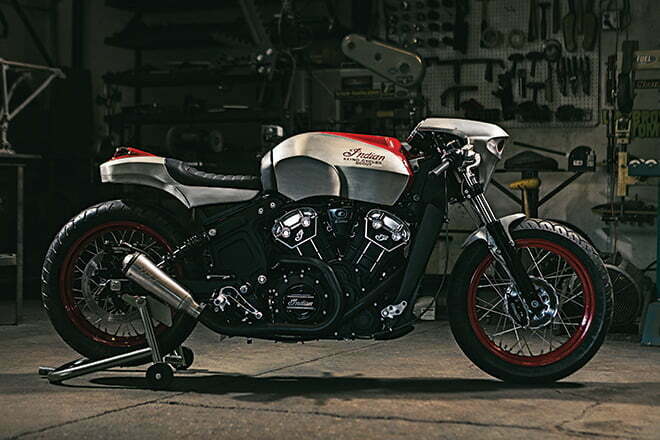 Keino has since built a plethora of bikes in a myriad of styles all his own. Whether building a racer, chopper, tracker, custom, or classic, Keino knows no bounds when it comes to customization. His small but well-stocked shop is filled with old and new Harleys, BMWs, and a mess of Japanese bikes in various stages of construction waiting to become the next in a long line of Keino-built customs.

Every time we visit Keino it is a real treat to see what he has been working on and what he has just finished. He is a builder’s builder for sure. And this is why in the beginning of 2017 Indian Motorcycle commissioned Keino to build a custom bike using a factory-fresh 2018 Indian Scout Bobber as the bones. Until the bike was delivered to him, Keino had never even thrown a leg over a new edition of the Scout, but once he fired it up and took it around his Brooklyn block he knew the 100 hp and sub-500-pound machine was a great basis to build a bike with.

That headlight nacelle is nuts!

At the same time Keino was fixing to tear apart the box-stock Scout Bobber and get to fabbing up the tank and fenders, he had been reading books about the ’20s and ’30s Aero and Streamliner train designs, and so an idea of Art Deco meets the future of transportation was born inside his mind.

“Keino knows no bounds when it comes to customization. His well-stocked shop is filled with old and new Harleys, BMWs, and a mess of Japanese bikes in various stages of construction.” 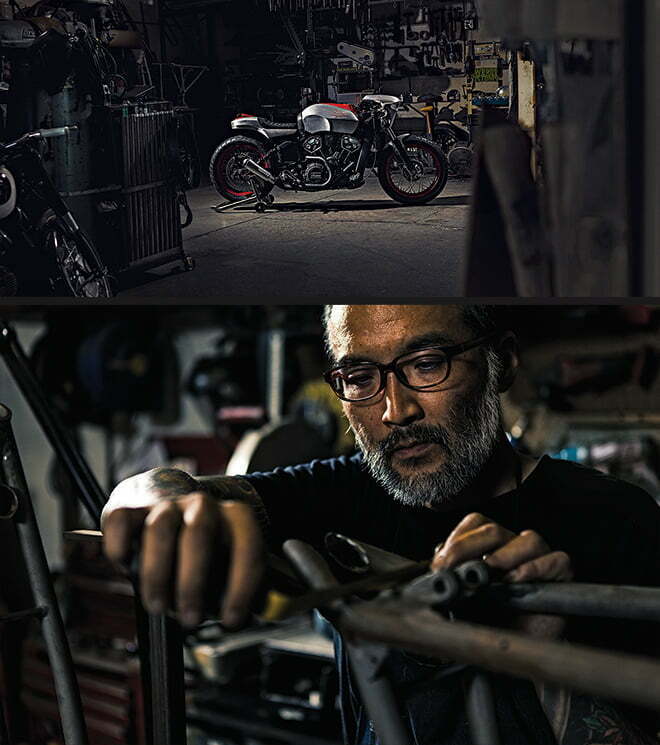 Man and machine. To some extent, each defines the other.

Soon after, Keino got busy hand making all of the bike’s sheet metal in aluminum, which, as you can guess, takes an infinite amount of time. He also put in many personal touches along the way, and in three short months the bike you see here was born.

We love that Keino’s custom Scout Bobber has a character all its own and that the fabrication is stunningly beautiful. We also applaud both Indian and Keino for combining forces on such a dramatically different bike and showing all sorts of generations of bike builders and riders what can be done when going your own way.

‹ The Jart Shovelhead Chopper › The Sierra Stake Out

Across the great Pacific Ocean on the islands of Japan, a pair of guys have been making waves, which have […]

Hot Bike made a quick trip out to visit the DePalma clothing HQ with Kristofer Bareng. Check future mags for some […]