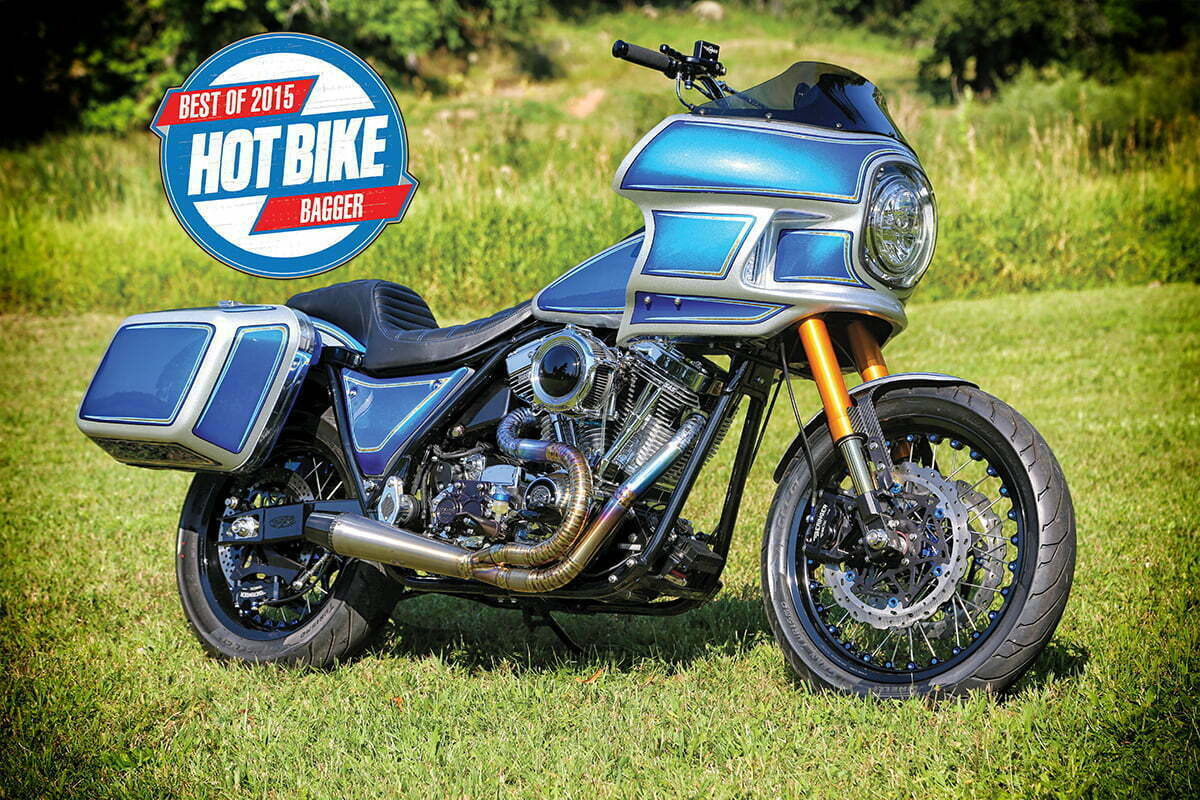 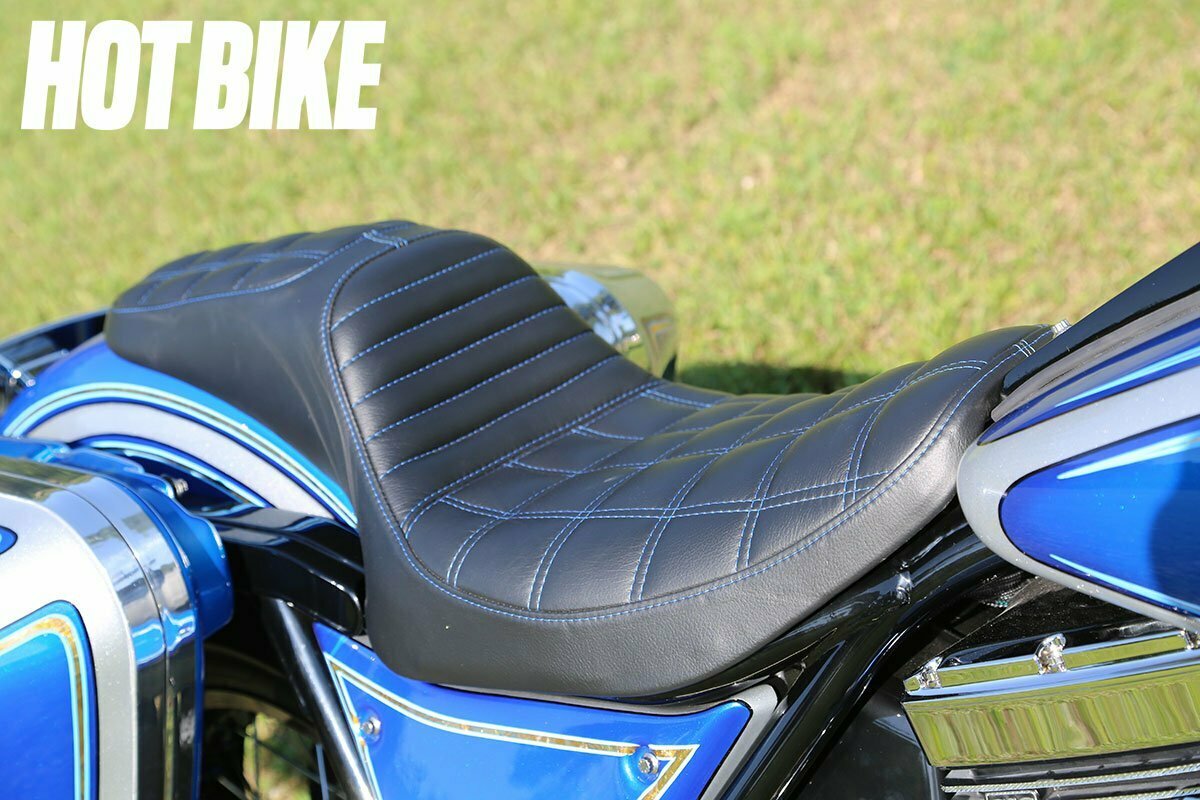 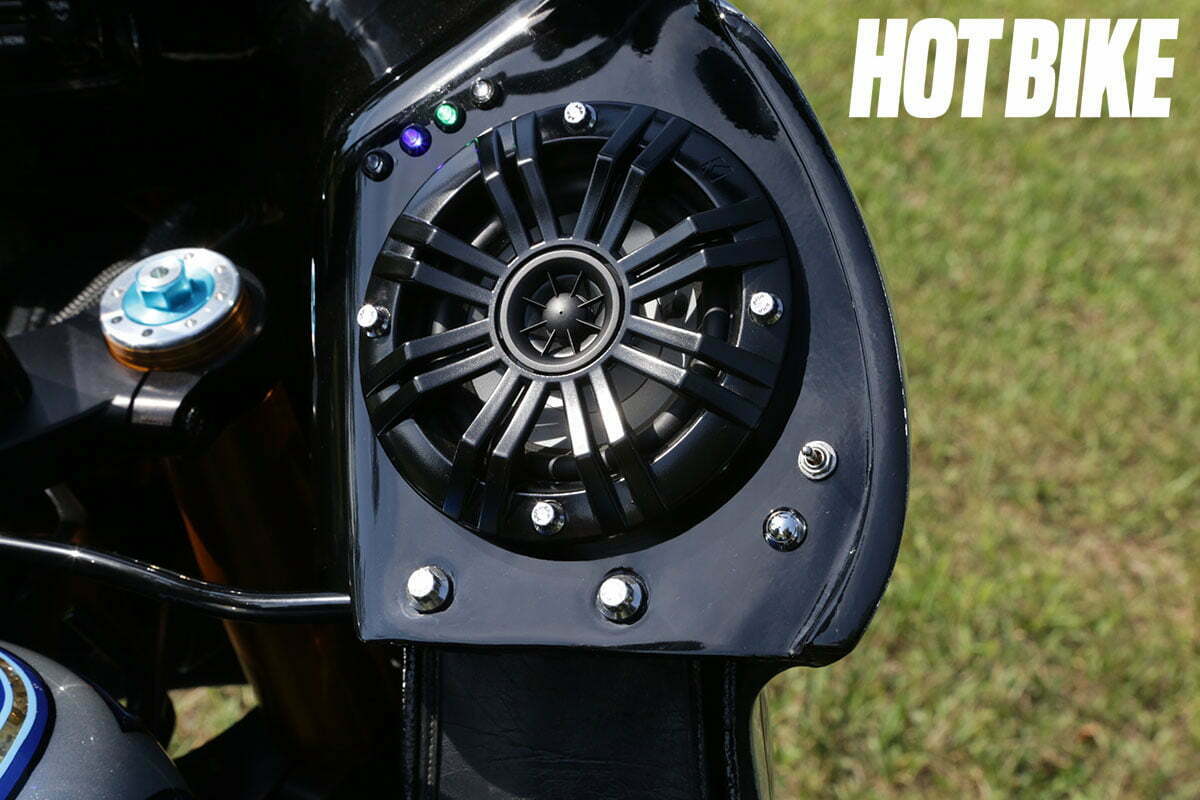 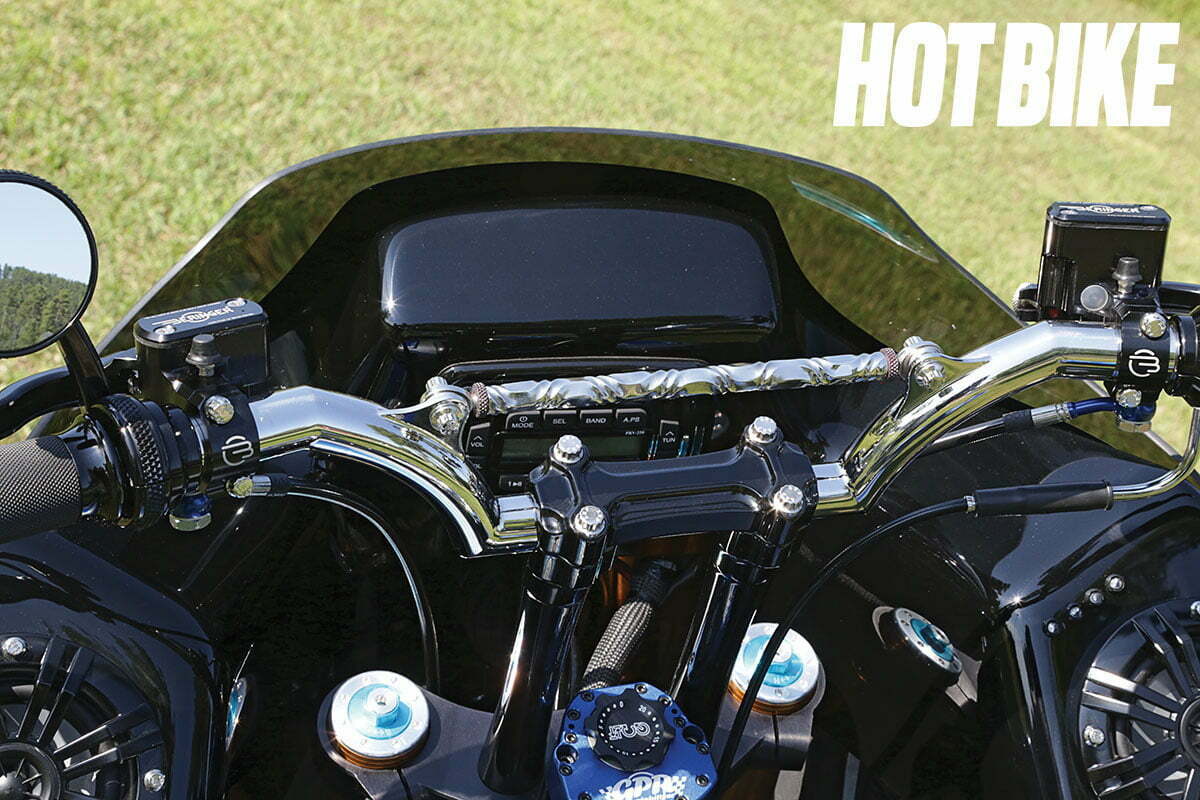 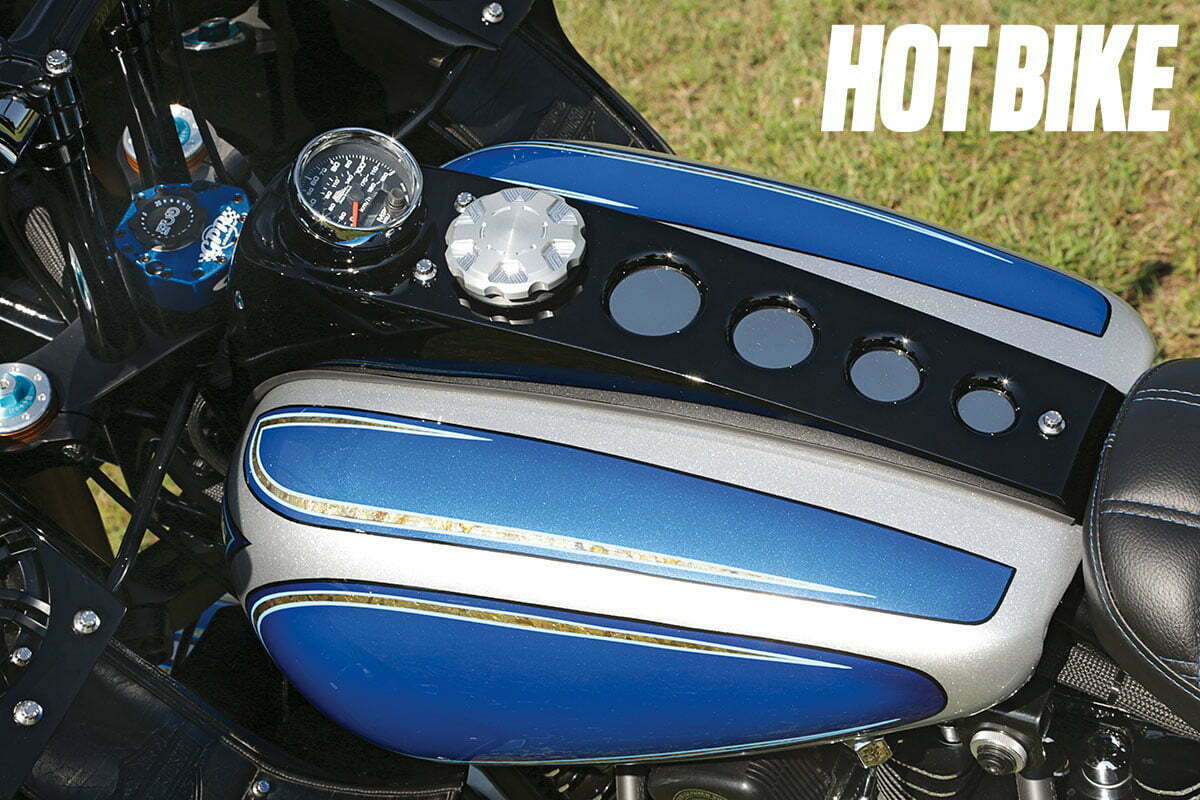 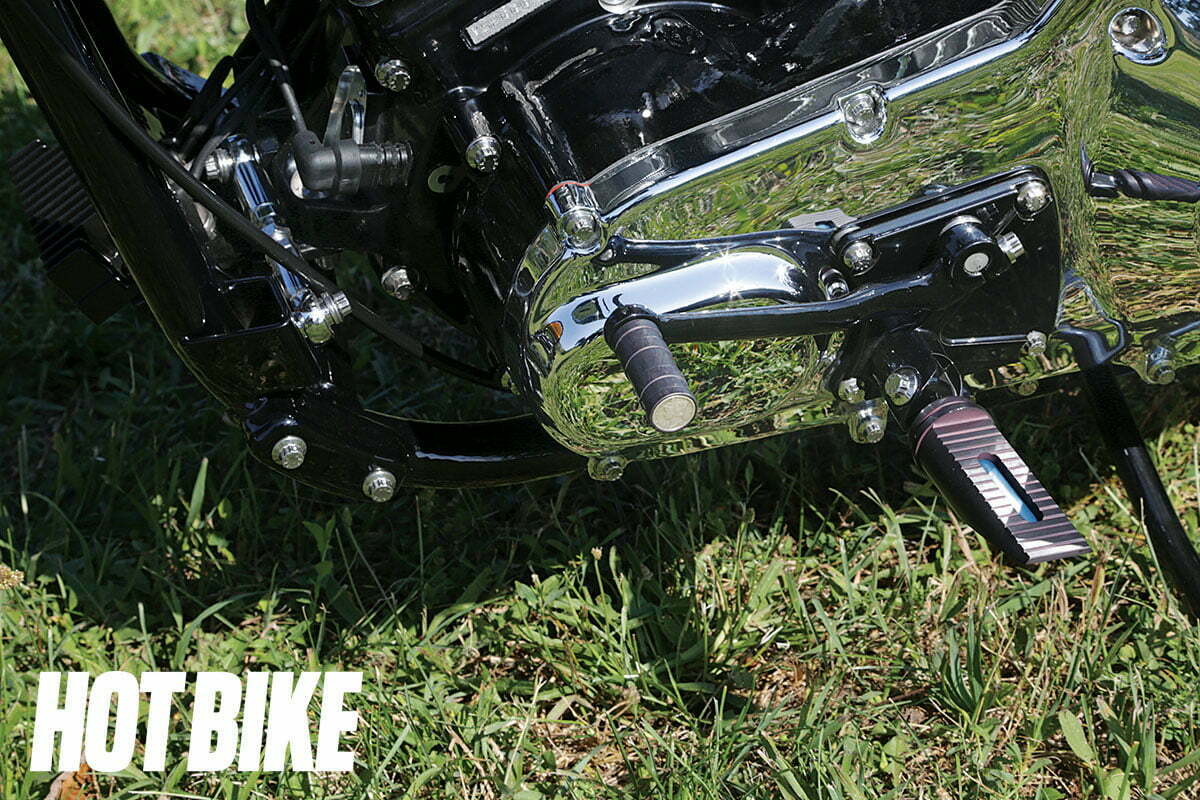 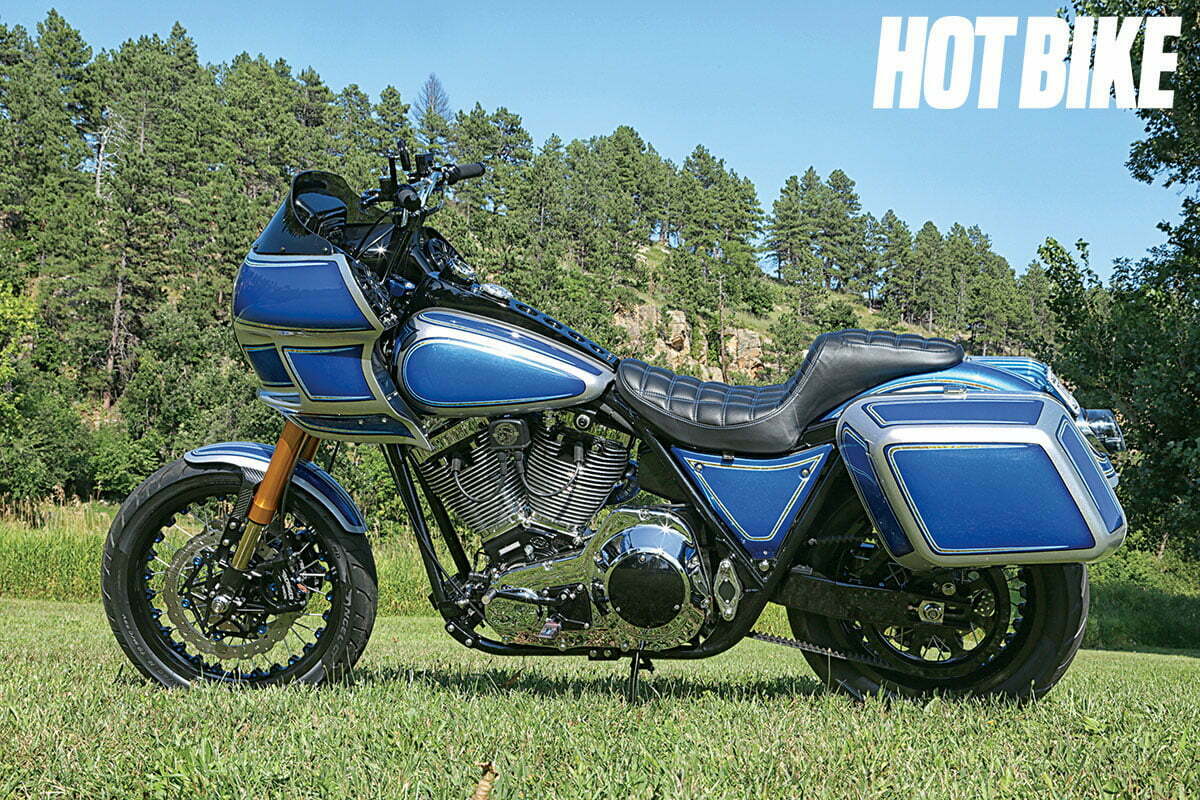 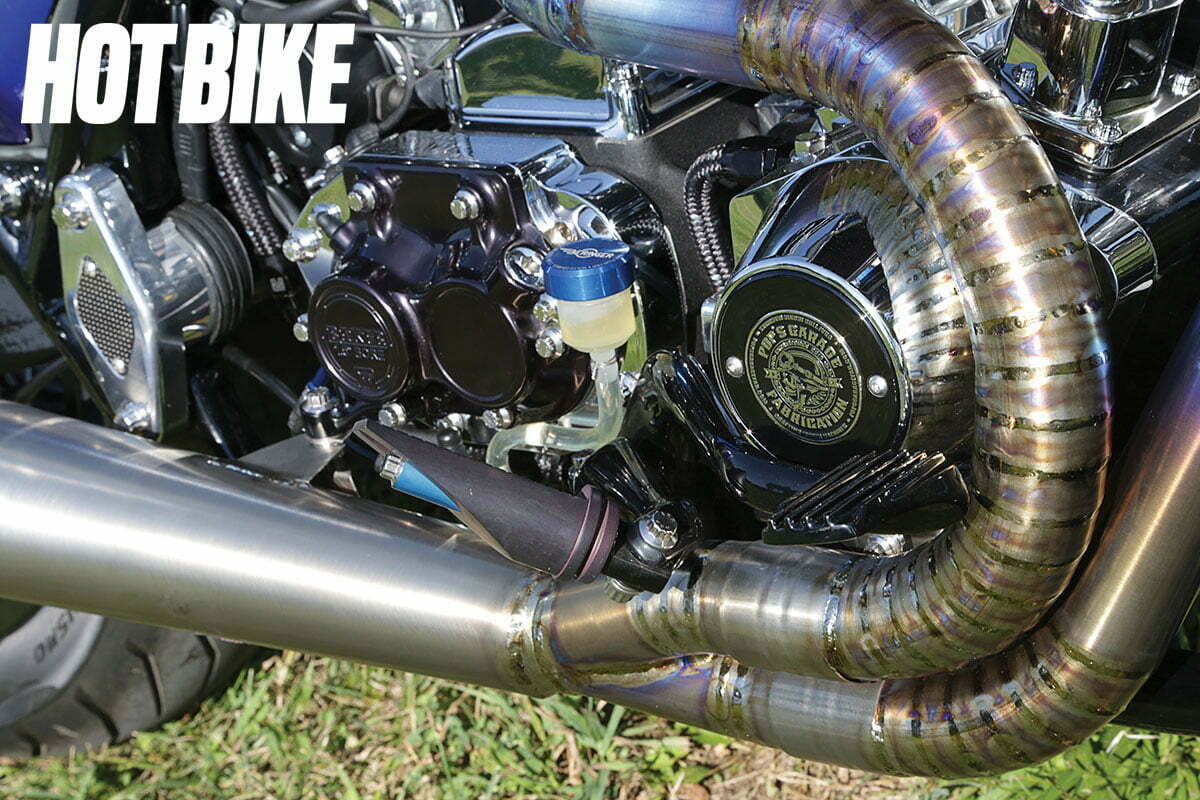 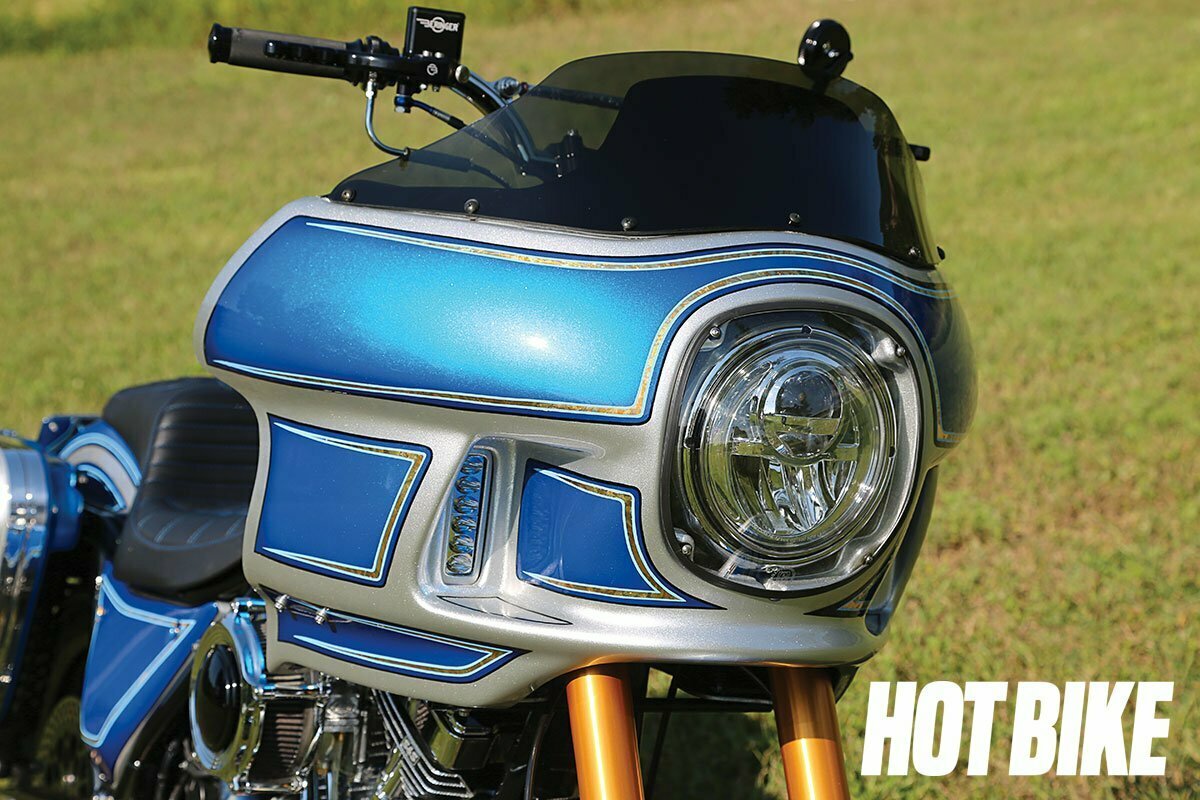 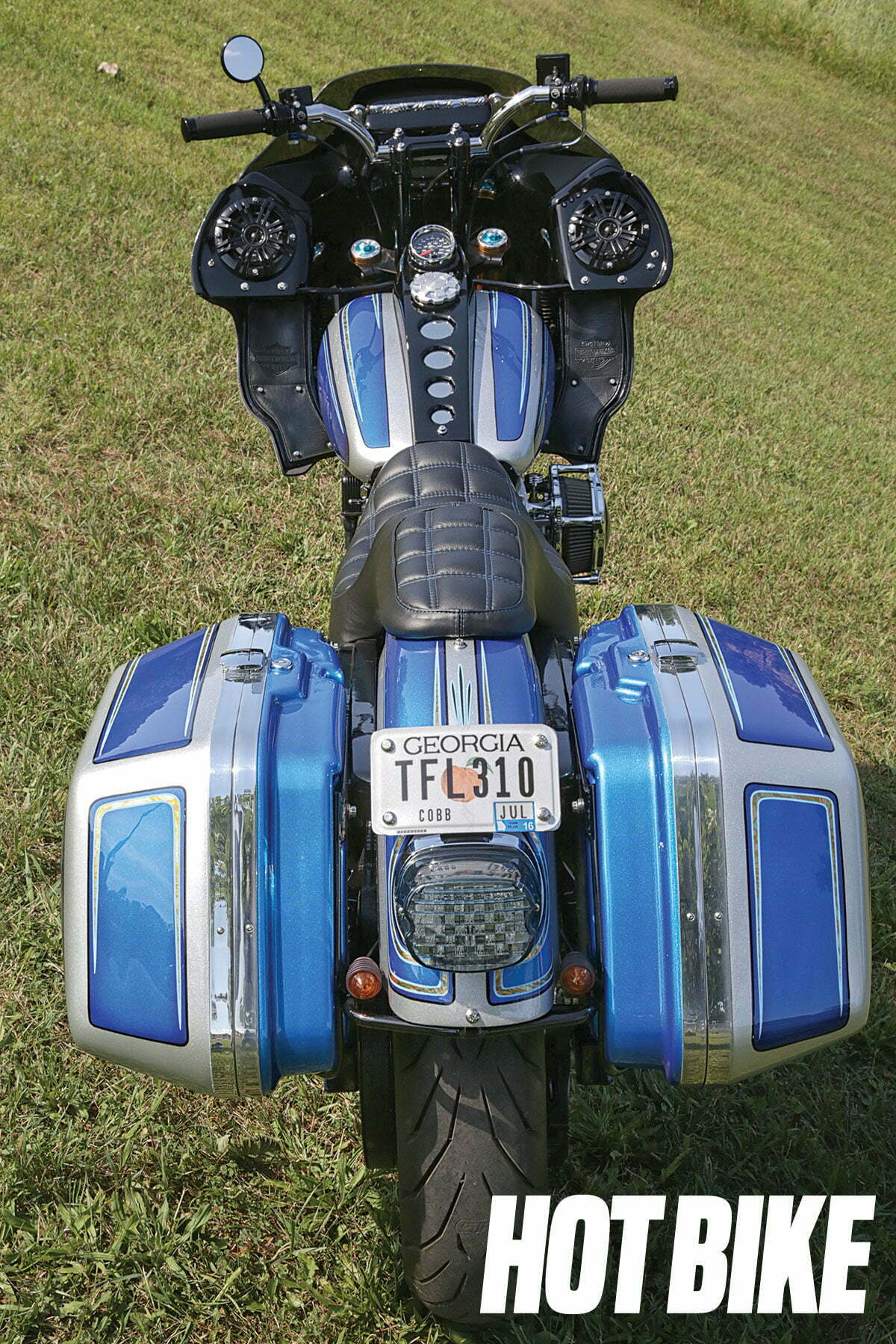 The idea for this project was inspired by Jeff Holt’s 2014 Hot Bike Tour build “FXXXR.” When I saw the articles around the Gold FXR build, I was sold. The iconic traditions surrounding the FXRs, including the community and brotherhood, are so inspiring. I wanted to build a retro bagger. This bike rolled off the assembly lines in 1985, the same year I was born. So when Kirk Taylor from Custom Design Studios told me he had tracked down  a one-owner 1985 FXRT, I knew it was meant  to be. This bike was just another great example of some 1985 rage. I should have known then that it was going to fight me the whole way through. I’ve fought against authority for no reason my whole life. Let’s just call it faulty wiring.
Kirk was a big help throughout this whole build. From the beginning I knew I wanted the bike to be blue. Kirk had painted a helmet for my father some time back, and the color combo was mesmerizing. The metallic mini flake was manufactured by JDSU, the same company that designs all the dyes for the world currencies, and is distributed by PPG. It was a limited-run type deal and gives the paint that extra something special.For me, this bike had to function. I wanted an aggressive bike that would turn heads and kick ass in the corners. I’m so tired of seeing people pay for bikes they can’t enjoy.

For me, this bike had to function. I wanted an aggressive bike that would turn heads and kick ass in the corners. I’m so tired of seeing people pay for bikes they can’t enjoy.

I feel like they are blinded by the cool factor and the ideas that television shows have programed into them. It’s all smoke and mirrors.
With this bike I kept the original frame minus some tabs. The gas tank, rear fender, and bags are original. The front fairing is also the original, but I removed the vents and replaced them with Rigid brand LED lights that are super bright. The stock front end was tossed off to the eBay pile and was replaced with a Kraus Motor Co. kit. It’s a killer kit that allowed me to use the Öhlins universal forks and of course the Kineo wheels. These wheels are nuts and are super light and full of attitude. Did I mention tubeless? Turns out, Kirk is the only US distributor for these wheels. Now with my front suspension set up, I needed some stopping power. I chose Beringer for my controls and calipers and BrakeTech for the front rotors.
The rear suspension was set up by the crafty folks at Race Tech. Too bad these sweet shocks are hidden under the bags. What is very visible is the Tracs aluminum swingarm. Talk about light and saving some weight. The rear calipers are also Beringer, but the rotor is from Wilwood. All the brake and clutch lines were custom made by Spiegler Performance.
For power I turned to S&S Cycles for the crazy diamond-cut Frankenstein 117 Evo motor. I can’t help but hear Tim Taylor in my head every time I think of this motor. Driving that power back and saving me some weight is the Rivera Primo belt drive setup. It’s hidden under the factory primary cover like a ninja in a bush. The inner primary is Delkron, and the transmission is a killer Baker six-speed.
The bars on this bike were a one-off type deal. I wanted something narrow, moto style, and different. With so many people producing bars these days, it’s hard sometimes to be original. I’m kind of obsessed with twisting stainless and try to add some to every bike I build. The cross-member on the bars is threaded, twisted stainless. You can actually set the tension on the bars by twisting that rod forward.
The tank dash is also unique. I removed the fuel gauge from the factory dash and installed the speedometer in its place. The rest of the dash was cut up. I welded in a panel with tapering punch flare holes down the middle with mirrored stainless underneath. I added mini toggle switches around the speakers in the fairing for the turn signals and lights. The whole setup is super-clean and functional. The rear turn signals were turned down by hand on the lathe and stashed away low between the bags and rear fender. One of the most time-consuming pieces made on this project were probably the pegs. Too many steps to count in the process, but I’m very happy with the way they turned out. Every nut and bolt on this bike was replaced with stainless 12-point hardware from ARP Inc. The axle nuts were specially made just for this project. For me, quality hardware can really take things to the next level.

Every nut and bolt on this bike was replaced with stainless 12-point hardware from ARP Inc. The axle nuts were specially made just for this project. For me, quality hardware can really take things to the next level.

One of the focal points on this project has to be the crazy titanium exhaust system built by Sawicki Speed. The way that titanium changes colors just blows my mind. It really complements the paint and is a big weight saver. When the box showed up from Canada I thought it was empty. No joke, it’s that light.
All in all, I’m very happy with the end result of this bike. The contrast of black and chrome is perfect. The bike handles like a MotoGP racer. I feel like this is how it was supposed to roll off the assembly lines in 1985. The technology and mind-set just wasn’t there. Good things take time.
Just want to thank everyone who has helped both physically and mentally throughout this whole project. It takes a village to raise most of us, and that’s how I feel about every project. Much love and respect.

Tech Skill Level Plus-Sized Wheels and Tires With Upgraded Shocks Add Looks and Performance Depending on your needs or desires, […]

The title pretty much sums it up. We just wanted to share some photos of the Icon 1000 Outsider Jacket, Kuryakyn […]