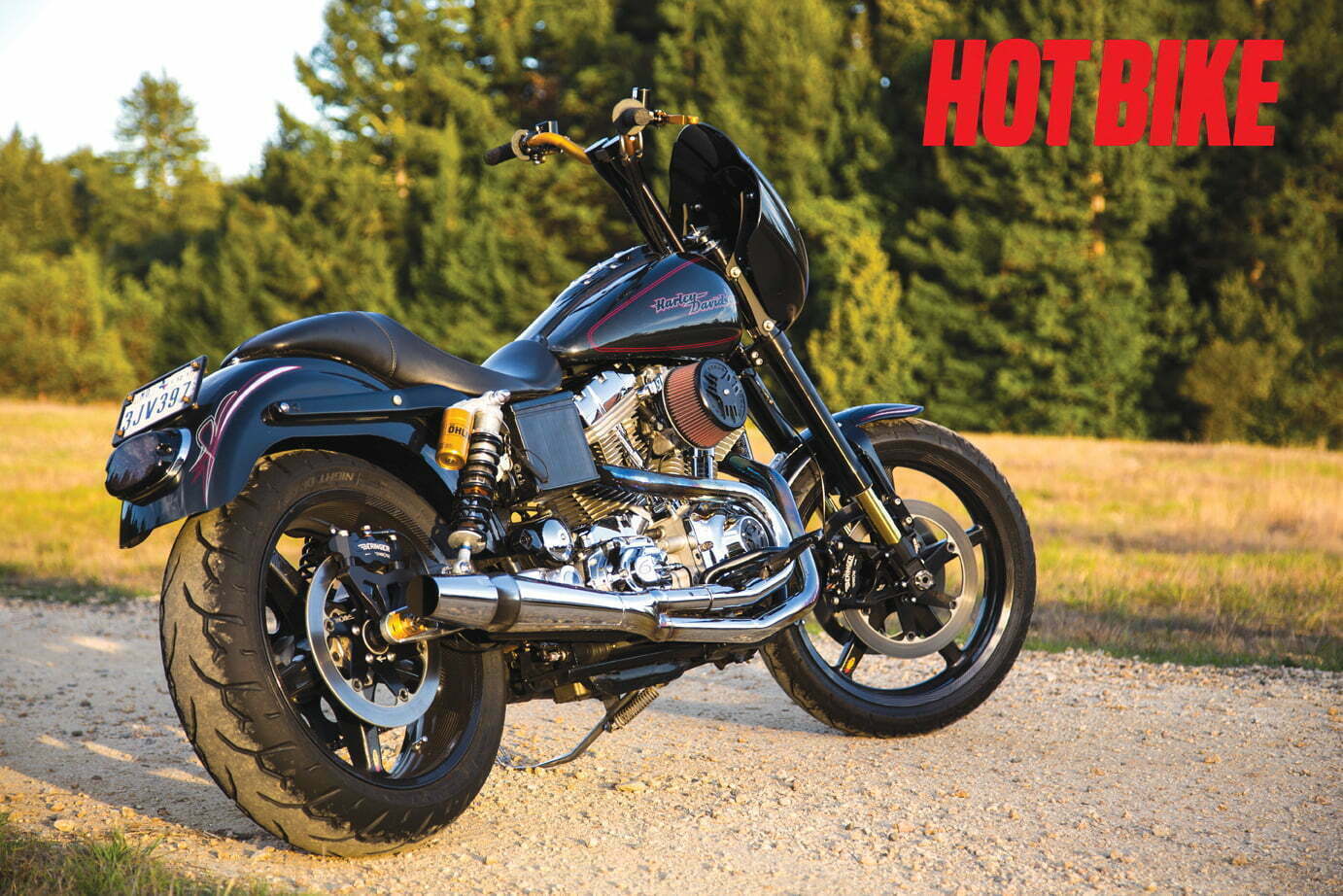 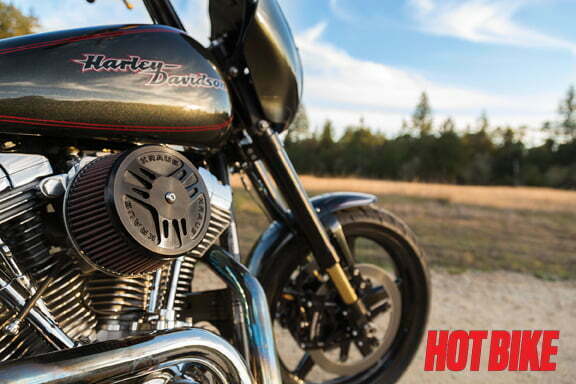 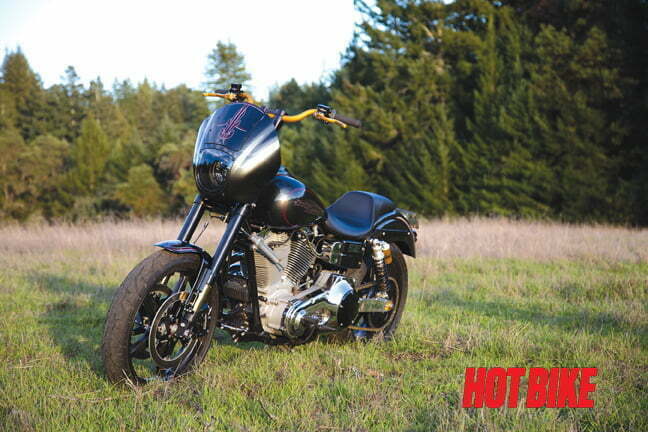 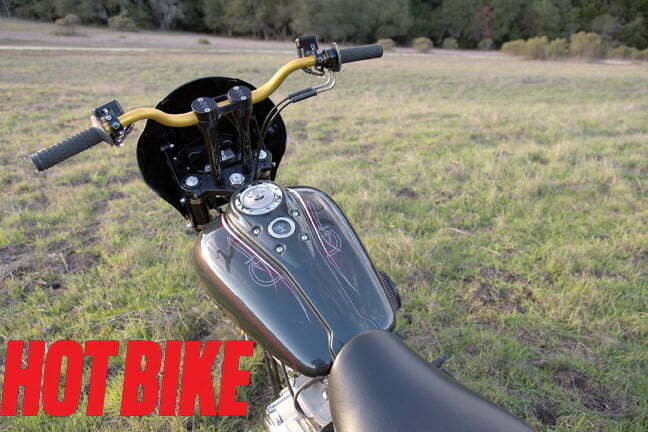 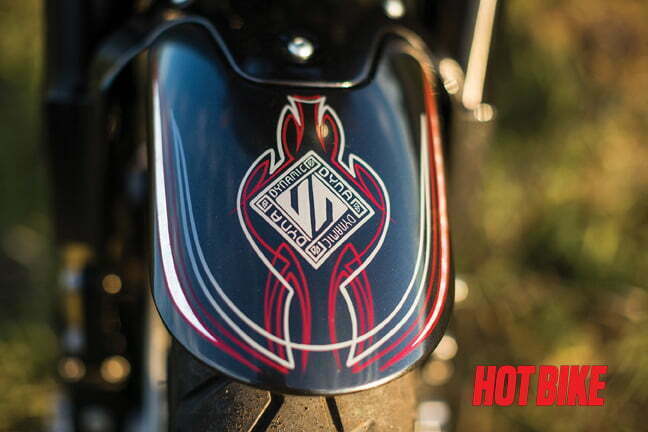 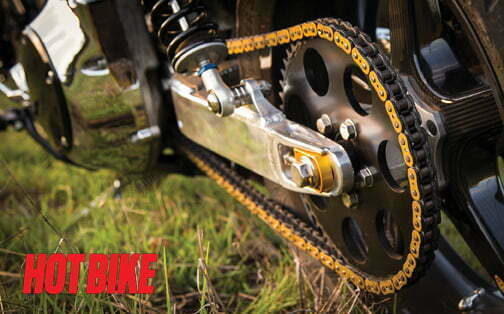 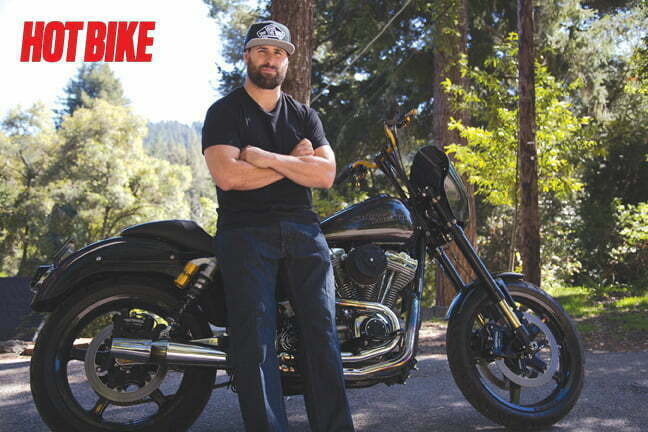 “Do you want the Rolex or the Timex? They both accomplish the same thing.” That’s how Justin Collins put it when asking customer Josh Kimble about the parts for this 2005 Dyna, Street Lethal. Josh’s answer was pretty much always, “Rolex.” That might sound like business is always booming at Justin’s shop, Dynamic Dyna. Not at first though. “I opened up dynamicdyna.com in August,” Justin says. “The first month was slow, but we had sales. September rolls around, and I wake up one morning and check the site. Someone tried to order one of our package deals, but the credit card didn’t go through.”

A voicemail to the would-be buyer later, Josh Kimble called Justin back. “I asked Josh if he had tried to purchase a kit from us last night—could have been fraud,” Justin explains. Josh had tried to buy a parts package online, but he ran into the same problem I face on a tight deadline: Drinks upped the difficulty on operating his keyboard. Two hours passed on the phone. When Justin hung up, they had a working plan for a project of epic proportions. Still, he didn’t want to get burned by buyer’s remorse, and he wanted Josh to know going in exactly what all the plans would entail. “I told Josh to sleep on it and make sure that before he spends a ton of cash make sure its everything he wants,” Justin says. “A $1,700 sale winded up becoming a full build.” Every step of the way Justin gave Josh options for parts and the info needed to make the right choices (as you can clearly see, since this Dyna is pretty sick). Not only did Josh have champagne tastes, but he brought the cash to back it up. Now all Justin had to do was meet his customer’s high expectations for a serious dream bike. They still hadn’t even met in person at that point.

“Josh had only talked to me over the phone, and now he was going to trust me with his cash and bike,” Justin tells. “I’ve never been so stressed out. Expectations were set high, and I needed to deliver.”

Which Justin clearly did. If he hadn’t, first off, you’d be reading about some other bike right now. As it is, you’re looking at the sweetest-handling Dyna Justin has built to date. The Kraus trees and Öhlins forks went together easily. Dynamic upgraded to Beringer brakes all around. Josh’s steed now sports a hydraulic clutch for a smoother pull. BST carbon-fiber wheels are some of the most expensive shoes on the market, but for the weight reduction alone they’re worth the extra cheddar. “Everything we took off the bike was replaced with better, lighter parts,” Justin recalls. “We weren’t trying to make a racebike; we just tried to make it the nicest-handling Dyna out there.”

This is when Justin ran into a collector’s part for Josh’s bike. “I went by Alan Sputhe’s shop to check out his place and pick up some PosiTrac kits,” he says. “While we got the grand tour I saw a gem under the shelf upstairs covered in dust. It was what I thought was the last of the Sputhe aluminum swingarms.” Alan wouldn’t sell it though. Still, it didn’t hurt to ask. Justin told Sputhe if he ever changed his mind, Josh would pay full retail to take it off his mitts. Yeah, good luck with that, Justin.

Two weeks later Justin is putting that same swingarm on Josh’s Dyna. That’s how long it took Alan’s buddy, Watso, to call Justin back. Now, by “same swingarm,” I really mean “same model swingarm.” But I needed a little dramatic effect. Watso had the same type of swingarm for a project bike he’d never finished. It was swathed in blue tape working a day job as a dust collector in Watso’s garage. They agreed on a price, and Watso shipped it out. “Now I had to explain to Josh that his project was going to be $1,000 more expensive but he would have a collector’s part on his bike,” Justin says with a laugh.

At this point Justin’s shop was getting overgrown with parts and projects. He needed space, and he needed it yesterday. “I took the bike and the parts to Risha at Street Lethal where we did the teardown and final build,” he says. “The wiring was the fun part!” Risha really knows his wiring, so Justin let him handle the key switch/starting switch. “Then I ran the hydraulic lines through the bars and plumbed the brakes and clutch,” Justin recalls. “Risha wired in a high beam/low beam switch in the visor since we eliminated all the wiring off the bars. The bike came out bitchin’!

“The final product gave me proof that all the haters out there are full of shit when they say Dynas aren’t racebikes and that they handle like shit or that FXRs are the only Harley worth buying,” Justin continues. “When you want to go fast, this bike goes as fast as you want with one hand on the bars. When you want to corner, the bike corners. When you want to stop the bike has stopped on its own because the brakes are amazing. This bike is intuitive, it knows what you want and performs.” He describes this project as a collaborative effort with his friends Satya Kraus, Risha, Josh, and himself. “I feel privileged to have been able to build a bike of this caliber and have a customer give me his trust to do what we do!”

1. The motorcycle we are using for this install is a 2004 Harley V-Rod VRSCB with stock braking system and […]

Don’t leave the house for your motorcycle camping trip without packing these essential items. Amazon When it comes to motorcycle […]

The phone rang between welds at Russell Mitchellis Exile shop on ablistering desert valley day. “Russell, whatta ya doing next […]