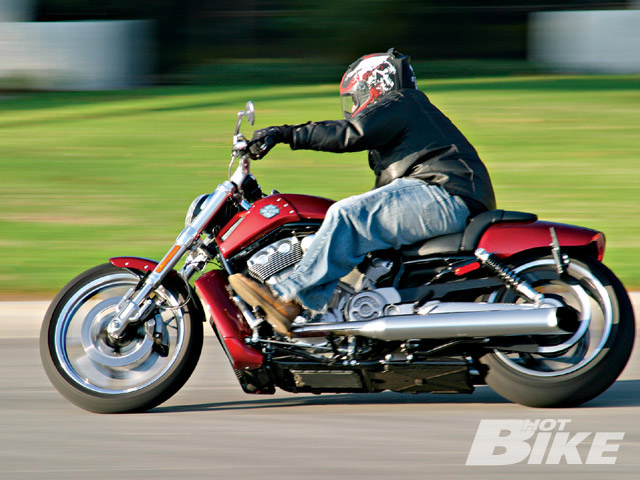 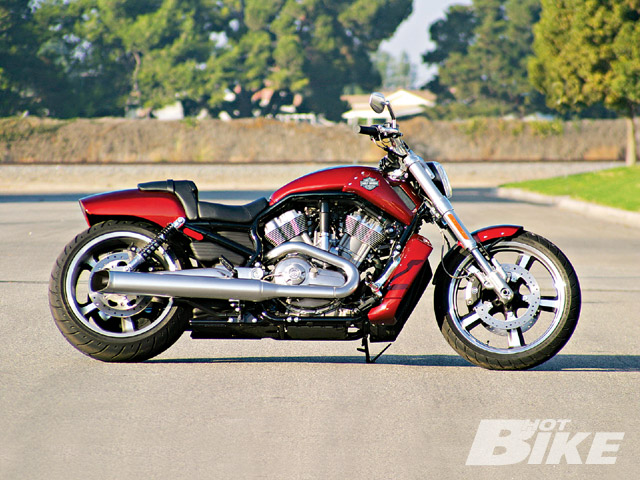 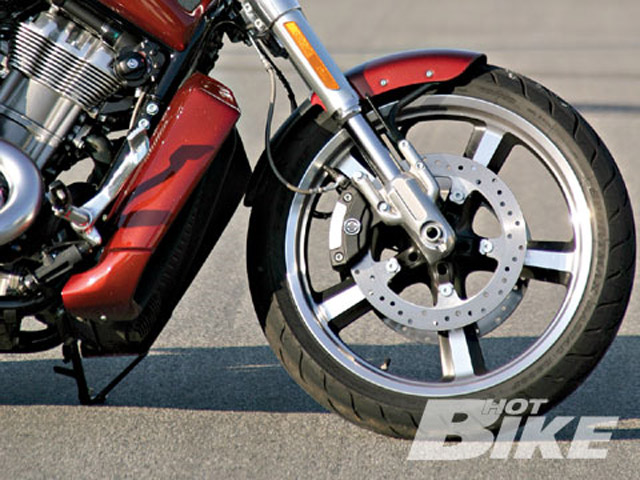 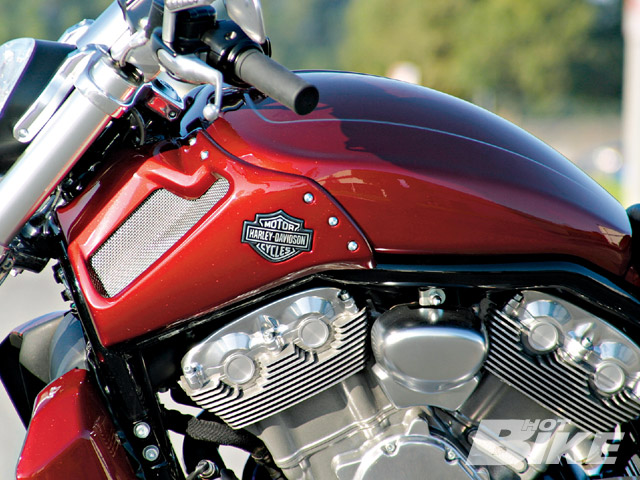 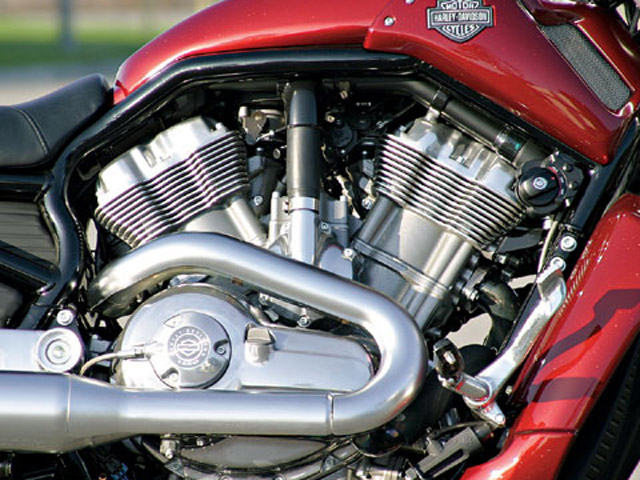 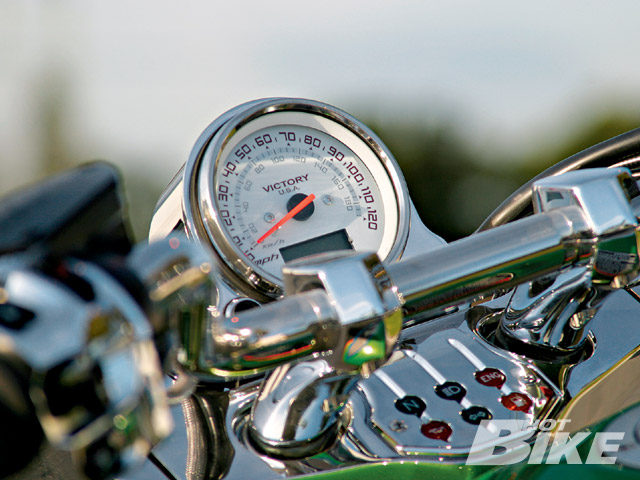 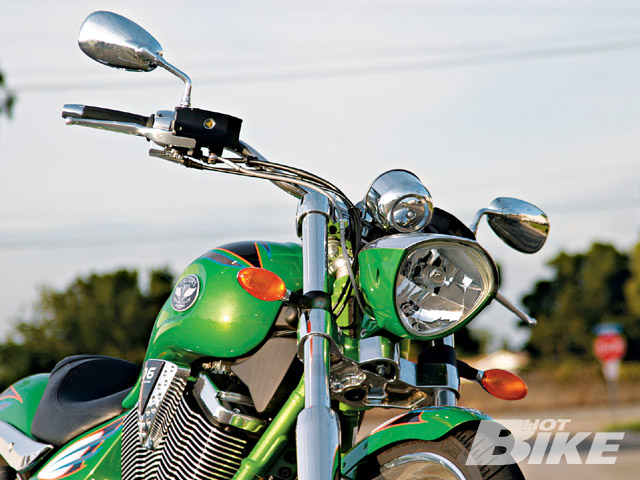 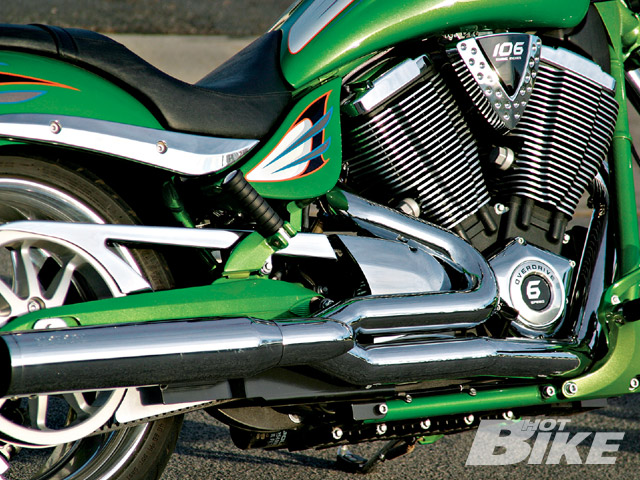 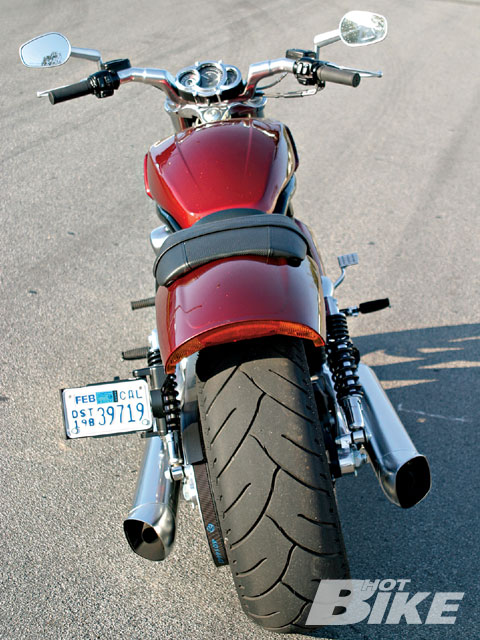 When the two largest American V-Twin motorcycle manufacturers Harley-Davidson and Victory Motorcycles launched their 2009 models, the brand new V-Rod Muscle from Harley and the Vegas Jackpot from Victory were definitely on top of the list of two-wheeled giants we wanted to throw a leg over. Immediately. It just so happened that they were both briefly in our possession around the same time.

Muscle
When the first V-Rod was launched in the early part of the decade, V-Twin enthusiasts had mixed emotions, very mixed emotions. The reason? “Harley-Davidson” and “liquid-cooled” was incorporated in the same statement. It seemed oxymoronic; maybe even a sin to H-D traditionalists. But Harley held firm and a sub-culture of V-Rod enthusiasts was born and is now thriving and continues to grow. Fast-forward to 2008, the Motor Company yet again continues to break barriers with the launch of the new 2009 Muscle; not only making strides within the V-Rod platform, but bountiful leaps in the motorcycling industry as a whole.

Upon first glance of the Muscle’s futuristic stance I was immediately reminded of one of the light cycles from the 1982 flick, Tron (Note: I’ve seen way too many movies). The Muscle is a great representation of the different avenues Harley-Davidson is exploring in order to maintain freshness within the V-Twin industry. From the angular design of the airbox cover, and the brand new five-spoke cast aluminum front and rear wheels, both are unique to this motorcycle. Aesthetically speaking, that chopped rear fender houses an all-in-one LED stop/tail/turn signal assembly, and cleans up the entire rear section of the bike, especially with the side-mount plate. The Muscle is not to be confused by any other model in the lineup. It stands apart and rightly so. It’s different.

I took the Muscle for a spin, and when exiting the freeway and heading toward my casa, I noticed a similarly looking motorcycle up ahead, and sure enough, after pulling up next to the other motorcycle, I felt as though I was looking into a mirror. After a quick nod to the pilot aboard his brand new Muscle, I smiled, waved, and sped on. It seems that people have taken to the new design.

What better place to start then with the pewter powdercoated Revolution motor, a liquid-cooled, 60-degree, rubber-mounted 1250cc V-Twin engine that comes standard on all V-Rod models. It is deceptively fast. The MoCo boasts an output of 122 hp at 8250 rpm and 85 lb-ft of torque at 7000 rpm. The power band starts in the mid-range and comes on strong in the higher rpms and stays consistent until redline, never hiccupping. We definitely felt the triple-digit hp in the high rpm. Before I knew it, the speedo was reading numbers too high to print. It’s safe to say that acceleration is quick when rolling back on the throttle, maybe because Mr. Muscle weighs 673 pounds when filled with fluids. And when combined with the internals-two overhead cams, and four-valve heads, and 11.5:1 compression ratio-this V-Rod accelerates like a bat out of hell (I love that clich), especially with the help of the new “sidepipe” dual exhausts in satin chrome featuring turn-out mufflers that shoot out, along with the fumes, behind the rear axle. However, all good things must end, and by end, I mean stop. The Brembo triple-disc braking system (also available with optional ABS) is second to none and accomplishes this stopping feat fantastically quick, which is essential when you have 122 horses to halt. The five-speed trans and race-bread “slipper” clutch transitions smoothly through the gears when shifting up and down.

I am 5 feet 10 inches tall with a 30-inch inseam. I weigh about 185 pounds and my stubby legs had to reach a bit toward the forwards. I’ve heard similar complaints from others with an even smaller frame; that they’re too stretched out; however, I didn’t feel as if the rest of me (upper torso) was stretching too far forward when riding. The back of where the rider’s saddle meets the passenger seat is at almost a 90-degree angle, this is a good design because I felt secure and cupped into the bike. The saddle is wide due to its 240mm rear tire, but it’s not too much of a stretch when resting your dogs on the asphalt at the stoplight because the Muscle stands pretty low at roughly 25 1/2 inches tall with someone close to my weight-a buck-eighty-five-on top. When on some of the bumpier terrain, the 43mm inverted front fork, and the rear shocks with black springs worked cohesively, especially on the ridiculous freeways in SoCal. They suck, but the suck factor went way down because of the Muscle’s suspension system. The Muscle’s been fitted with a brand new, internally-wired handlebar that measures 1 1/2 inches in diameter, is made from cast aluminum with tubular steel ends, and features an integrated riser. Sitting on top of the bars are mirror stems that feature LED turn signals built in.

I put my wife Ashley on the back to show her how good the suspension was and went for a half-day ride. The result: she didn’t complain once (for once!). She said the bike was comfortable and of course she loved how fast it went. Great minds think alike.

**JackpotIn 1998, Victory Motorcycles launched its first motorcycle, the V92C. Since that iconic launch, the company that bills itself as “The New American Motorcycle Company,” has proven that it’s here to stay; for the long haul. After receiving much acclaim for the V92C’s design, Victory released several models over the years to its lineup and has established quite a presence in the industry today. After celebrating its 10-year anniversary as a viable entity in the V-Twin marketplace (what does 10 equate to in business years?) the American manufacturer of power cruiser’s like the Vegas Jackpot, keep consumers coming back for more. From the sleek lines of the bike flowing from the front wheel to the rear 250mm tire the Jackpot’s curves don’t quit, especially when adorned with the flashy chrome frontend that comes standard.

The most impressive aspect of the Jackpot is its drivetrain package, which features a 106ci motor and six-speed trans with overdrive. The Jackpot was one of the three cruiser models treated to the 106/6 powertrain for 2009 (also found on Hammer and Hammer S models). This motor represents power, a certain machismo, masculinity and strength. It features a single overhead camshaft design with four valves per cylinder and a 45mm throttle body, giving this 106 a 9.4:1 compression ratio. The 50-degree twin claims to produce a whopping 113 lb-ft of torque and 93 hp, according to Victory. You can definitely feel the torque when launching from the line. You feel as if you could almost pull a trailer behind the bike and not the other way around. And when the engine’s fumes are expelled out of this new 2-into-1 exhaust system (does not come standard), those numbers could go even higher. The low rumble of the new exhaust’s vibrato roared as I made my way down the street.

Upon encountering some rough patches of highway, the Jackpot’s front suspension, a 43mm telescopic fork that features 5.1 inches of travel, worked well with the single, mono-tube preload adjustable shock in the rear. The combination of the two took to most of the bumps smoothly, but I thought it was pretty rough in some spots. The suspension took hard shots pretty well, but there was a lot of vibration in some of the short, choppy sections of the freeway. When turning, the Jackpot maintained its path, but a little elbow grease was required to muscle the Lime green cruiser to the finish because of the wide rear tire and the 95.9-inch overall length of the bike. However, when stopped, my feet planted on the asphalt on both sides, I didn’t feel as if I had to reach toward the ground with just the tips of my toes. The bike was low enough for my 30-inch inseam to rest comfortably.

There are plenty of new features on the 2009 Jackpot. The headlamp and LED taillamp are 2X brighter than previous models and its run/brake light illuminate the night’s sky, making others more aware to when you’re near. The Jackpot is available in Boardwalk Blue, Solid Sunset Red, Orange Crush with extreme graphics, and Lucky Lime with extreme graphics (shown). If you’re looking to get noticed, the green scheme of things will get the job done. But, if you’re after a subtler look, a solid black model is also available. The swingarm and frame are also powdercoated to match the color of your choosing. The new one-piece seat fits a passenger comfortably. I asked my wife to participate-she’s a trooper-and she obliged. The half-day trek on the Jackpot was well received by my better half. It was evident when she said her favorite part of touring the scenic countryside was the actual ride. When we arrived to our destination, she was ready to get back on the bike. So was I. HB

Best father and son photo, Taber Nash and his little grom at the Broken Spoke Campground. Best riding gear. After […]

Speed’s Spotlight For a carbureted bike, and there are still plenty of us with them, the question of whether or […]