Racing down the damp gravel back roads of the Smoky Mountains, my knees were squeezing the steel gas tank as I tried to remember to keep my arms relaxed. The hole in my shin and the roadside repairs we made to the bike after my low-side the day before were distant thoughts as I focused only on the patch of ground in front of me and how to get through it. As we blasted by campers, four-wheeler drivers, and other riders on “more capable” bikes, we grinned behind our helmets as we heard their predictable response:

“Wait, s—t, those are Harleys?!” And then we would pull away as we climbed, ripped, and slid our way farther down the trail.

Over the course of two days riding in Tennessee, not only did I get a solid thrashing and a lesson in how terrible I was on dirt, I learned what it is about these bikes that drives people to Frankenstein them into everything from airplanes to submarines, and how Hugo Moto has figured out the recipe for wild, American-made enduro fun. 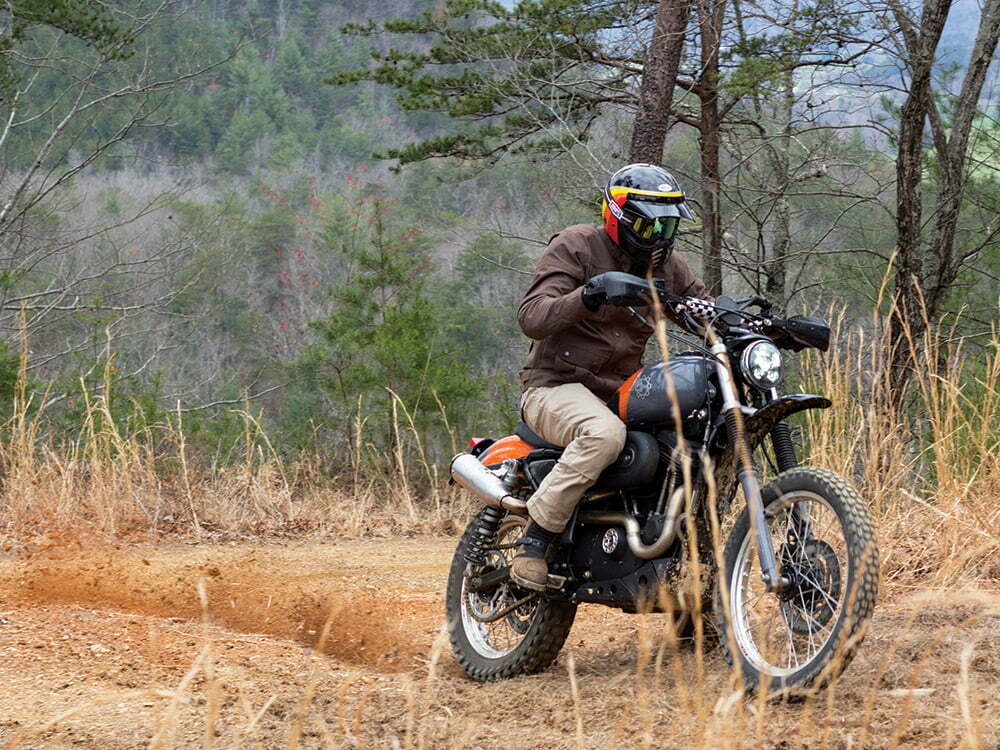 Jason Smith on the HD2 Enduro from Hugo Moto.

I reached out to the Hugo Moto guys after seeing the preproduction version of the company’s World Tour kit—an all-inclusive package to change a Harley-Davidson Sportster into a trail-chomping enduro. After a quick conversation with Nico Danan, founder of Hugo Moto, he hipped me to the fact that Hugo had updated its World Tour kit to the new HD2 Enduro you see here. With a basic tool kit and some knowledge of how to use it, it should take only a couple of days to enduro your Sporty, especially since the parts are all bolt-on and don’t require cutting or welding.

While a lot has changed, the underlying Sportster appeal is still strong in Hugo’s kits.

After talking back and forth with Nico and Hugo’s president, Jason Smith, a plan was hatched for a visit to Tennessee to ride the new enduro with Nico, Jason, and the Hugo boys, as well as Scott Maddux, owner of Smoky Mountain Harley-Davidson, and his crew.

Maddux can whip a Sportster through rough terrain faster than just about anyone I’ve ridden with (or behind, more accurately). And he was no stranger to scramblers since Smoky Mountain H-D had been building them for years. In fact, Smoky Mountain H-D helped Hugo develop its own scrambler kit by setting Hugo straight with proper ratios for suspension and wheels. “When we started the company, we only had the World Tour kit, an adventure kit,” Nico says. “We created the Scrambler kit following in the footsteps of the Smoky Mountain H-D scramblers, and we called the first one the Black Dragon SMHD Scrambler kit.”

The Hugo Enduro kit runs an 18-inch rear wheel with a 21-inch front, making it a little easier to hop over obstacles or cross rough terrain but sacrificing a little on-road handling. We would all have the opportunity to ride them on some of the best roads in the United States, with guys who knew them like the backs of their hands.

Of course, I was going to get slaughtered. 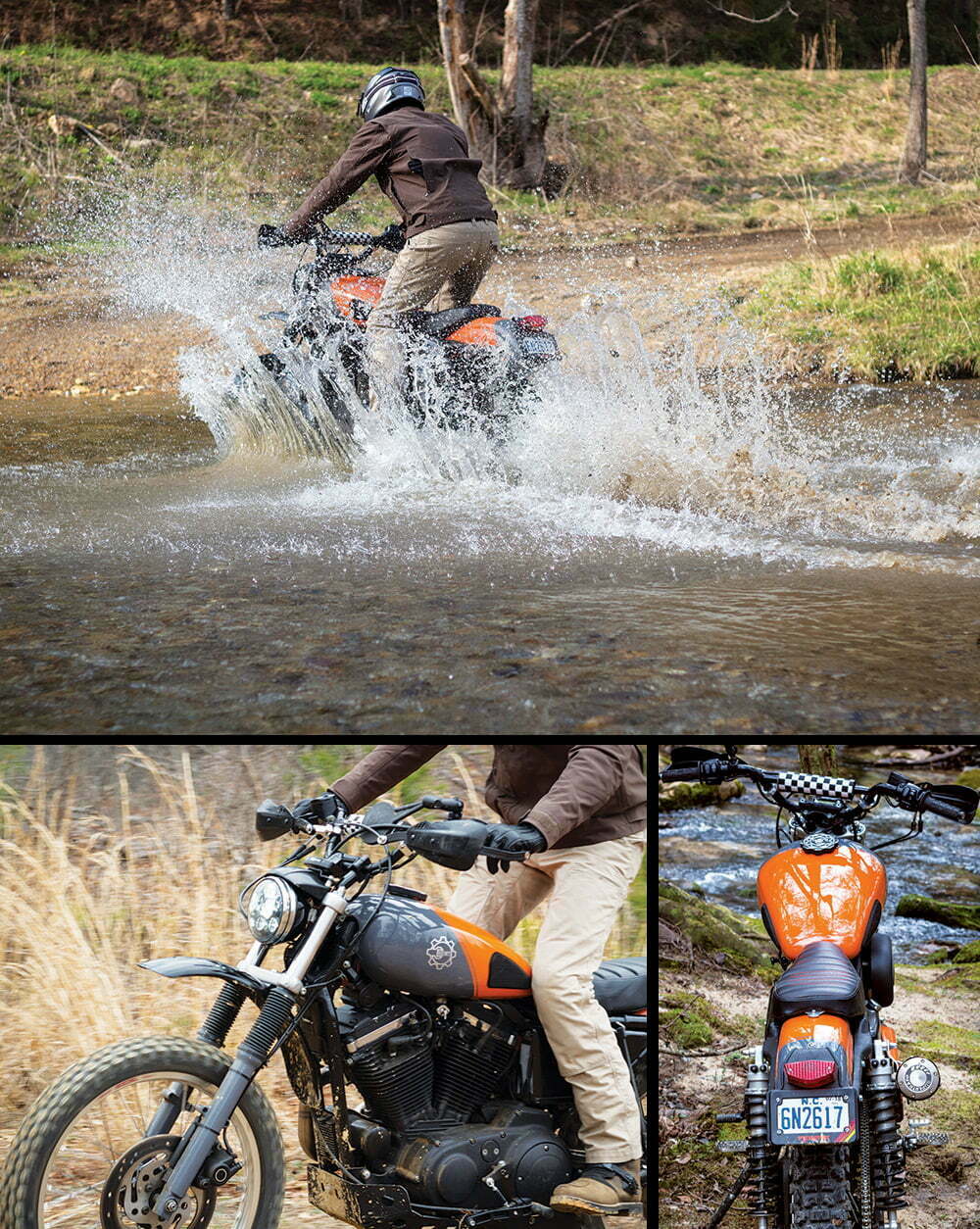 There’s not a lot of terrain the HD2 Enduro can’t overcome.

It was wet in Tennessee, but not rainy. The perfect bit of weather to make riding a challenge, with puddles in the shadowy corners, but not miserable and soaking wet the entire time. We would leave the dealership and ride through some of the famous roads in the area, such as Tail of the Dragon and the Rattler, before we eventually headed onto the mud, sand, and gravel roads that followed various rivers and streams through the Smoky Mountain backcountry.

Riding the enduro, I liked how the tall 21-inch front tire found its way through the muddy sections and deeper dirt, but still felt myself drifting a little farther to the back of the group. I was determined to stay with them, and by the end of the day—battered, bruised, and ready for some of that “white lightnin’ ” these mountains are known for—I was officially hooked on Hugo’s Enduro kit.

Thanks for showing me some of that down-home Southern hospitality, riding the back roads of the epic Smoky Mountains.

‹ Interview With Michael Lichter, Photographer And Motorcycles As Art Exhibit Founder › Amazon Prime Day Is Here — What’s In It For Us?

A 2-into-1 exhaust is great when it comes to performance enhancements amongst Harley Touring model riders. It’s just physics, people! […]

In part 1, we talked about what tappets do and got a little sidetracked on adjustable pushrods because they relate […]

The Lowside Of The Born-Free Motorcycle Show