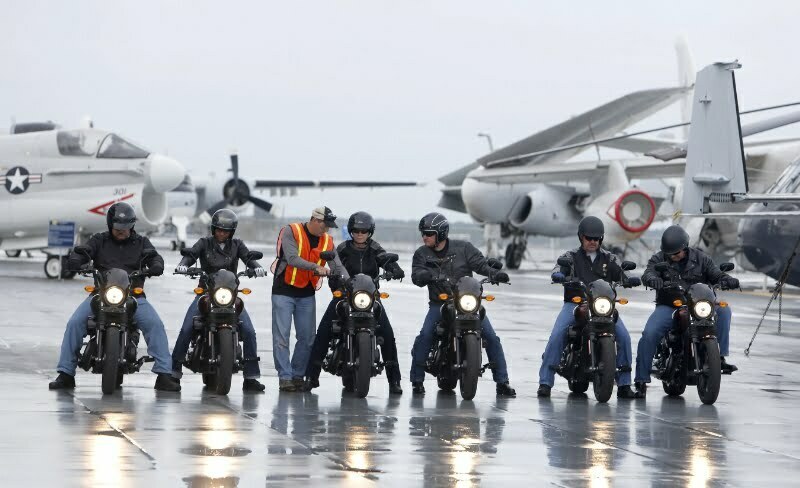 The original offer of free Harley-Davidson Riding Academy kicked-off prior to Armed Forces Day aboard the USS Yorktown aircraft carrier in Charleston, S.C., making it only fitting to take to the air to announce the free training extension.

“One of our objectives is to grow the sport of motorcycling in the U.S.,” said Walters. “Thousands of members of the military have learned to ride through the program so far. We’re proud to extend this opportunity in 2016 so even more military personnel can enjoy the very freedom they protect.”

All stateside military can take advantage of the offer by visiting a local Harley-Davidson dealer or going to h-d.com/AmericanHeroes. If Riding Academy is not available in a particular area, Harley-Davidson will reimburse the expense of attending a certified motorcycle safety program. Those currently deployed outside the U.S. also can submit the form by Dec. 31, 2016, and will receive a voucher for free motorcycle safety training, good through 2017 when they return home.

OPERATION PERSONAL FREEDOM
Along with today’s announcement of free Riding Academy training for all current and former U.S. military, Harley-Davidson announced last November a new alliance with Wounded Warrior Project that focused on helping improve the lives of service men and women living with Post-traumatic Stress Disorder. Additionally through the program, Harley-Davidson expanded its Operation Personal Freedom MotorClothes collection with 10 percent of the proceeds supporting WWP’s efforts. Finally, dealer events across the country will focus on welcoming and celebrating our military heroes.

Major Ranting Being in the magazine game means living your life in the past, present, and future all at the […]

Attention, Hot Bike Readers! Samson Exhaust has big news for you. As the sponsor of this department, Samson will give […]

Inside The Motorcycle Industry