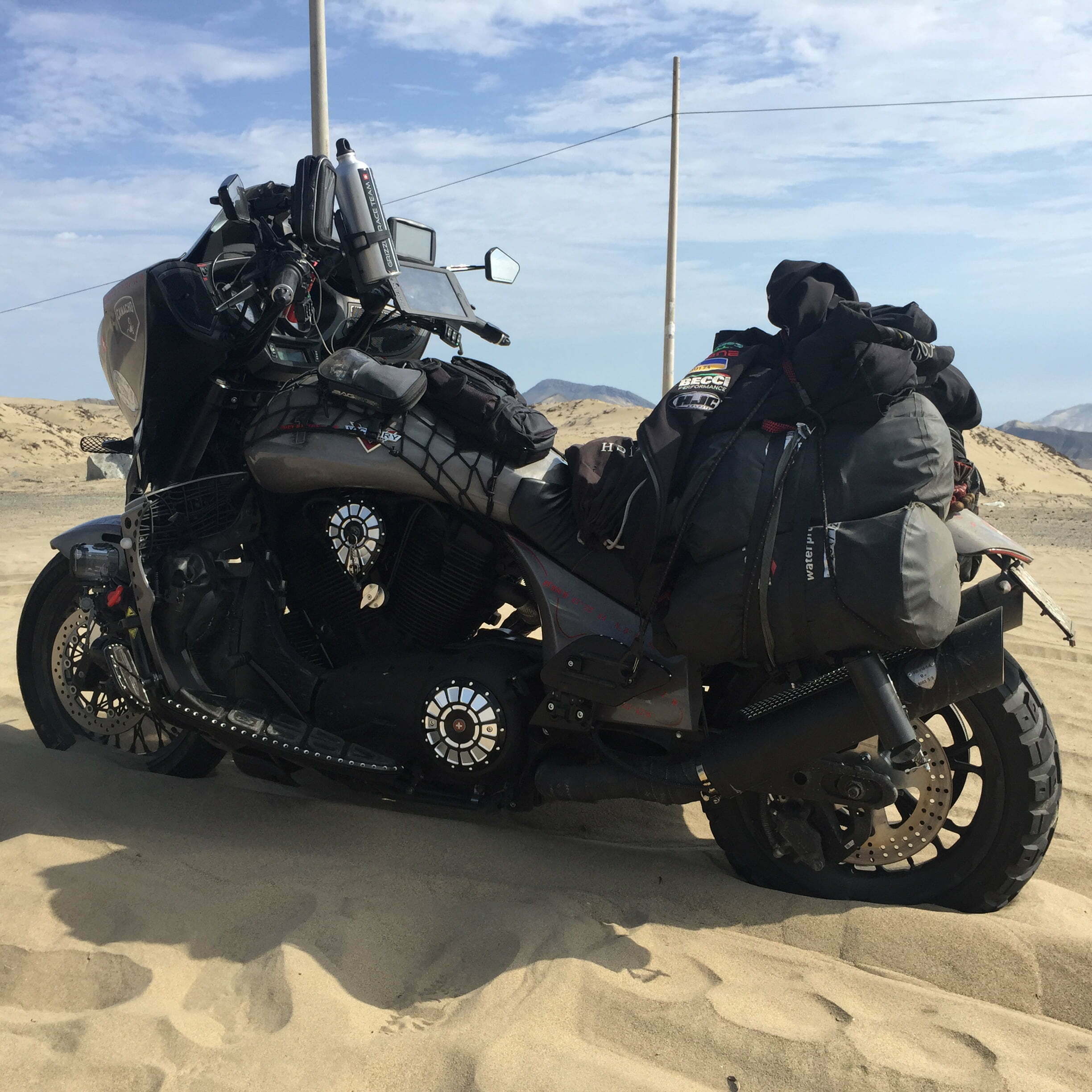 MINNEAPOLIS — May 2, 2016 — Swiss endurance rider Urs “Grizzly” Pedraita is 25 riding days and 16,932 miles into his quest to set a new world record by circumnavigating six continents in less than 100 riding days aboard his Victory Motorcycles® Cross Country Tour.

Grizzly rode away from Daytona International Speedway on March 11 flanked by hundreds of owners of Victory motorcycles who joined him to ride one lap of the Daytona 200 road course and escort him out of town for the first part of his journey.

From Daytona Beach, Fla., he traveled 3,971 miles in six days and 14 hours to complete the first leg of the ride in Panama City, Panama. He then continued traveling south 6,269 miles for nine days and 23 hours to reach Ushuaia, Argentina, at the tip of South America. From there, he returned 2,088 miles to Santiago, Chile, loaded his bike onto a plane and transferred to Australia, where he spent six days and five hours riding 4,604 miles west across the continent from Sydney to Perth.

From Perth, Grizzly and his Victory were flown to Cape Town, South Africa, on April 27, where they currently await clearance through customs. Thereafter is a 6,503-mile journey from Cape Town to Cairo, Egypt, where he’ll then point his front wheel toward Tunis, Tunisia, and a ferry to take him across the Mediterranean.

From Africa, Grizzly’s path will lead him north through Europe, then east through Asia. An eventual arrival in Singapore will have him load his bike onto a plane and travel to Anchorage, Alaska, before resuming his tour across North America to a planned finish in Daytona Beach.

“I had a very good start of my world record attempt from the Daytona Speedway on March 12 at 1:44 p.m. local time,” Grizzly communicates from his layover in Cape Town. “I’ve met many people on the road, and at the stops when I had some hours of sleep, and want to thank them for these encounters. They were very hospitable, helpful, open and without distrust – many thanks to them as this makes the world just wonderful!

“Now I am shortly before starting the next leg across Africa. In all books and on all plans, this is supposedly the most challenging continent to ride and I will surely have many more adventures in the next weeks as I continue my goal of being the fastest man on two wheels across all continents.” 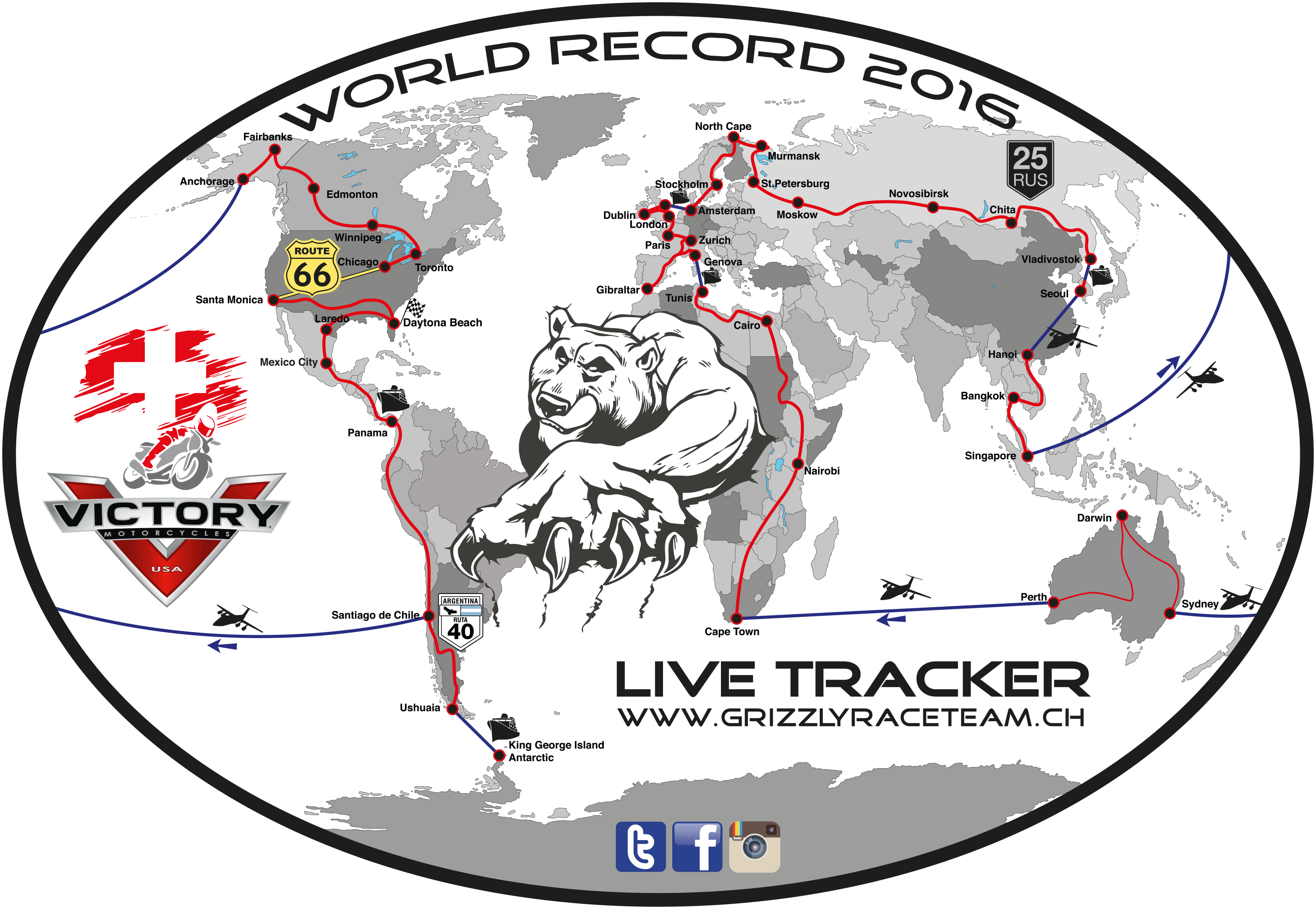 The Victory Cross Country Tour Grizzly is using for this attempt was specially modified by Motostyling Zurich. While the engine, frame and running gear remain relatively untouched, other parts of the bike have been redesigned to fit Grizzly’s needs as he covers long distances in remote parts of the world.

“We are excited about Grizzly’s progress thus far,” says Alex Hultgren, Victory’s Director of Marketing. “Ultimately, this is an endurance race that balances Victory’s well-known dependability with Grizzly’s mental and physical fitness. We look forward to tracking Grizzly through the next phase of his journey.”

Time and position measurement are being done via GPS and satellite tracking. Timing is not stopped on overland routes (i.e., when waiting to pass a country border or when the rider is sleeping). However, timing is stopped for air and sea transfers between continents and restarts once the bike arrives on the new continent.

Grizzly’s total distance is scheduled to be approx. 62,000 miles. The current record for such a ride is 120 days.

Step one is to start somewhere, we chose the front fender. After removing the fender trim light, we went to […]

When LA Baggers owner Armando Hermosillo began selling fiberglass extended long bags several years ago, he had no idea that […]

Bike Archives: Rods & Rides brings back the board

Where to Party in Daytona