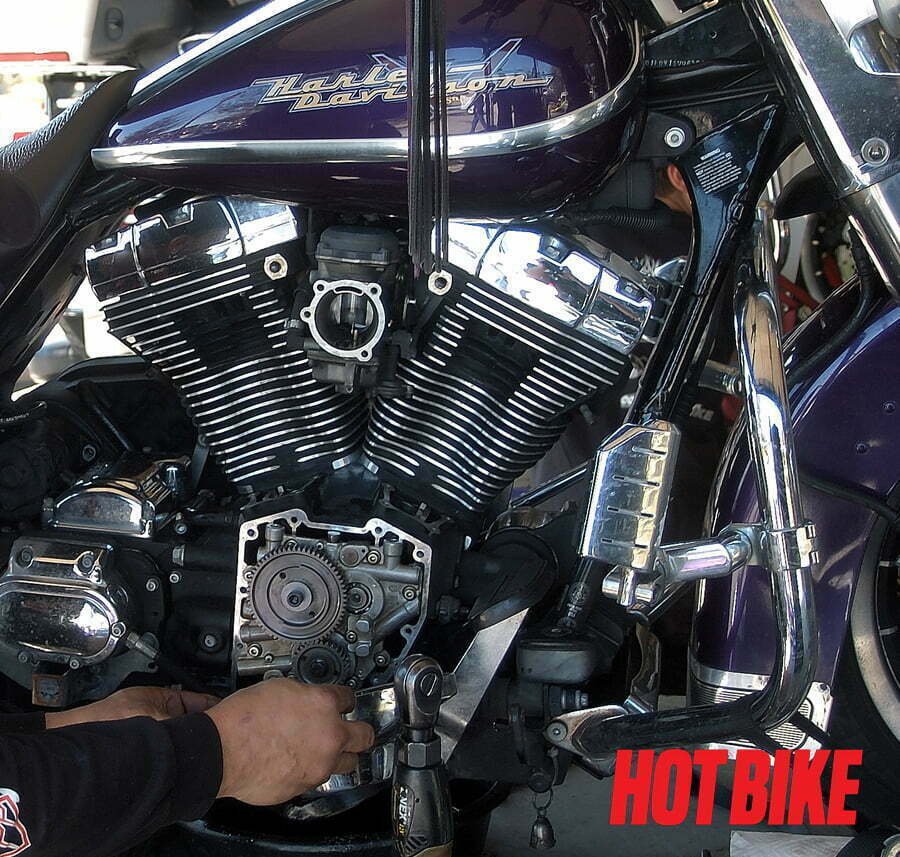 At Speed’s Performance it’s gears all the way. Cam-swap customers might initially be hesitant about including a gear drive in the job, citing any number of reasons, but the added cost and fear of excessive noise generally head the list. One by one, Jamie says, he’ll diffuse those concerns, and that rider will end up with a set of gears in the motor.

Any Harley rider serious about upping the performance of his or her ride is eventually going to turn attention to the cams. With the basics taken care of, those free-flowing pipes, deep-breathing air filters, and new jets in a carb or a dyno-developed computer map if it’s EFI, the next step is usually cams. Choosing the grind is a subject for another time and something that should be carefully discussed with a knowledgeable engine tech before any decisions are made. Like everything else about building toward performance, a properly set-up package is just that: a package. It all has to work together. But what we did want to know a little more about is choosing the method of driving those new cams in a TC-style motor. Is it necessary to go to the expense of a gear drive system, or is the factory’s chain drive all that’s needed? As always, for some answers we went to the guys who swap more cams than most anyone else, the crew at Speed’s Performance Plus.

SPP’s Jamie Hanson didn’t waste any time getting right to the point: “In all the years we’ve been in business,” he said, “we’ve probably done less than 10 chain-drive cam swaps. That’s it.” At Speed’s Performance it’s gears all the way. Cam-swap customers might initially be hesitant about including a gear drive in the job, citing any number of reasons, but the added cost and fear of excessive noise generally head the list. One by one, Jamie says, he’ll diffuse those concerns, and that rider will end up with a set of gears in the motor.

“We have a table display of all three drive styles,” he says. Chains with spring-loaded tensioners, hydraulic tensioners, and the gear drive. That’ll be the first show and tell leading a rider toward gears. The difference in the amount of effort required to turn each setup is eye-opening. While those two-tensioned chain drives take quite a bit of force to turn things over, with the gear drive it all spins effortlessly. Translation: A lot less horsepower is wasted turning camshafts, so more of it can go to the rear wheel. And that’s just the start of the case for gears.

“Later-model hydraulic tensioners are definitely an improvement over the spring-loaded versions,” Jamie says, and there are a number of kits to convert the earlier spring-tensioned systems to hydraulic. But both still have lots of power-robbing drag, and both still have those nylon pads that wear away. “And that’s what really bothers us about chain drives,” Jamie goes on. When those nylon rubbing blocks wear, the material drops right into the cam cavity where the oil pump sucks it back up leading to all sorts of problems, with the oil pump especially. A Harley engine is supposed to circulate oil, not bits of nylon. Strike two for chains.

Then there’s the matter of noise. A gear drive will whine, clank, and set up one heck of a racket, right? “Not so,” Jamie says. “Not when it’s installed properly.” First of all, even with chain drive a performance valve train is going to be louder than OE, that’s a given. Going from stock lift to something taller is going to generate more noise. The whine or clatter of a gear drive is something else altogether, and it’s something that can be quieted down considerably. The trick is taking the time to correctly set the backlash in the system, working with stock, over-, or undersize gears and properly matching them for the correct backlash. “It’s the most important part of the job,” Jamie says, and something too often overlooked. “We see bikes with drive gears set so tight they’ve broken teeth off the gears and others so loose you can’t hear yourself think.” But a gear drive properly set up in the first place with proper backlash won’t whine, it won’t clank, and it’s there for the long haul.

Which brings it down to the final argument for gears. If you plan on keeping the bike for a while and use chain drive, you can also plan on opening things up every 15,000 miles or so to renew worn-out tensioner blocks. And that’s a job costing a few hundred dollars, the price, as it turns out, of a gear drive. Why not spend that money up front and eliminate the need for future service? Put all that together, the free horsepower from a free-spinning system, the elimination of those nylon rubbing blocks, and the havoc they’ll cause as they wear away and peace of mind knowing the job is done once and for all with no need for routine maintenance, and it’s no wonder why the engine techs at Speed’s Performance can’t remember the last time they drove cams with chains. 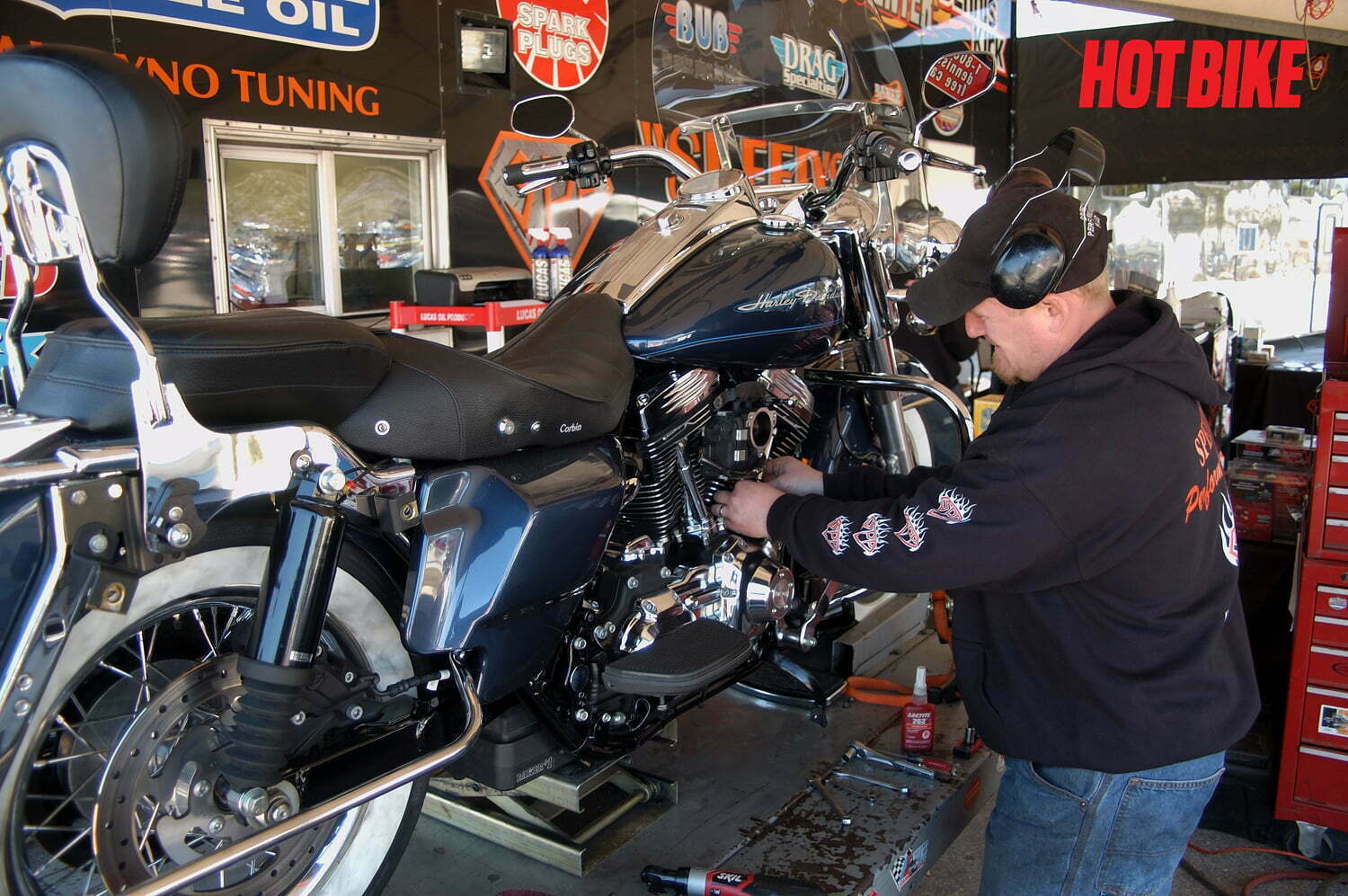 This Battery Jump-Starts Itself, And These Turn Signals Are Blindingly Bright

Believe it or not, when you crank over your engine, your starter motor is using battery technology that hasn’t changed […]