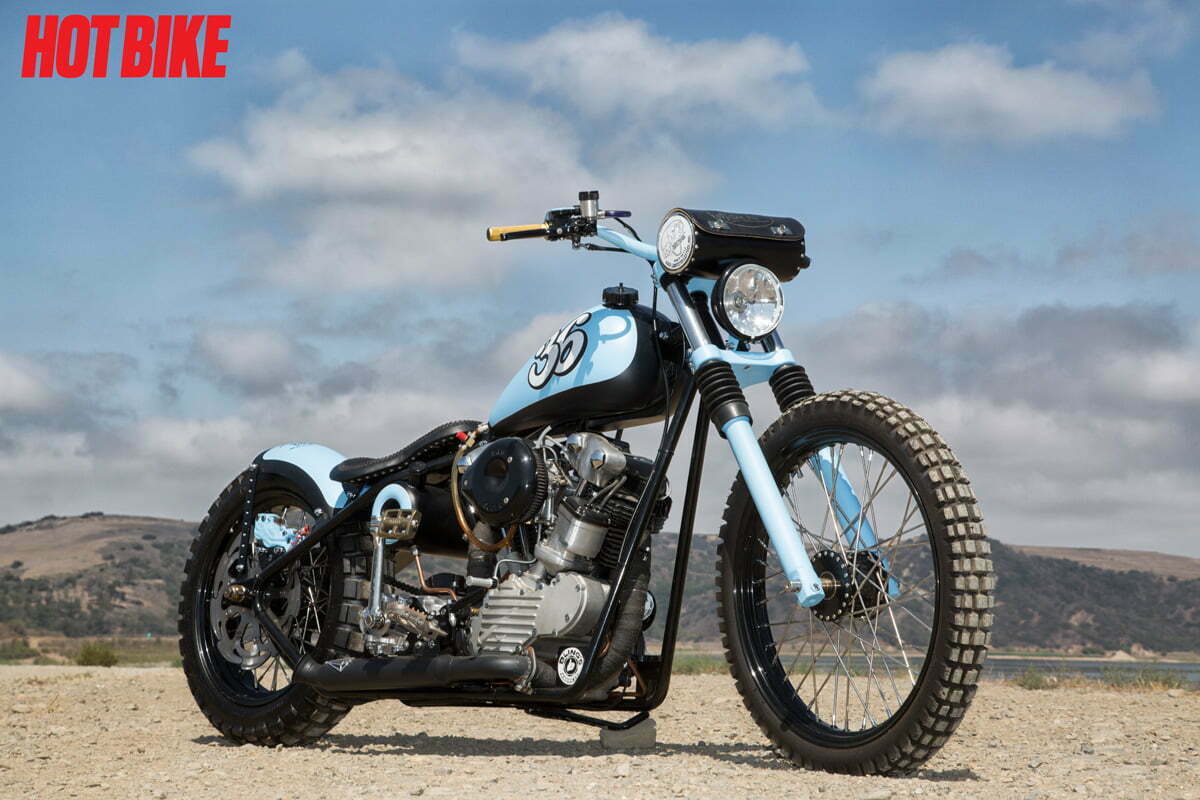 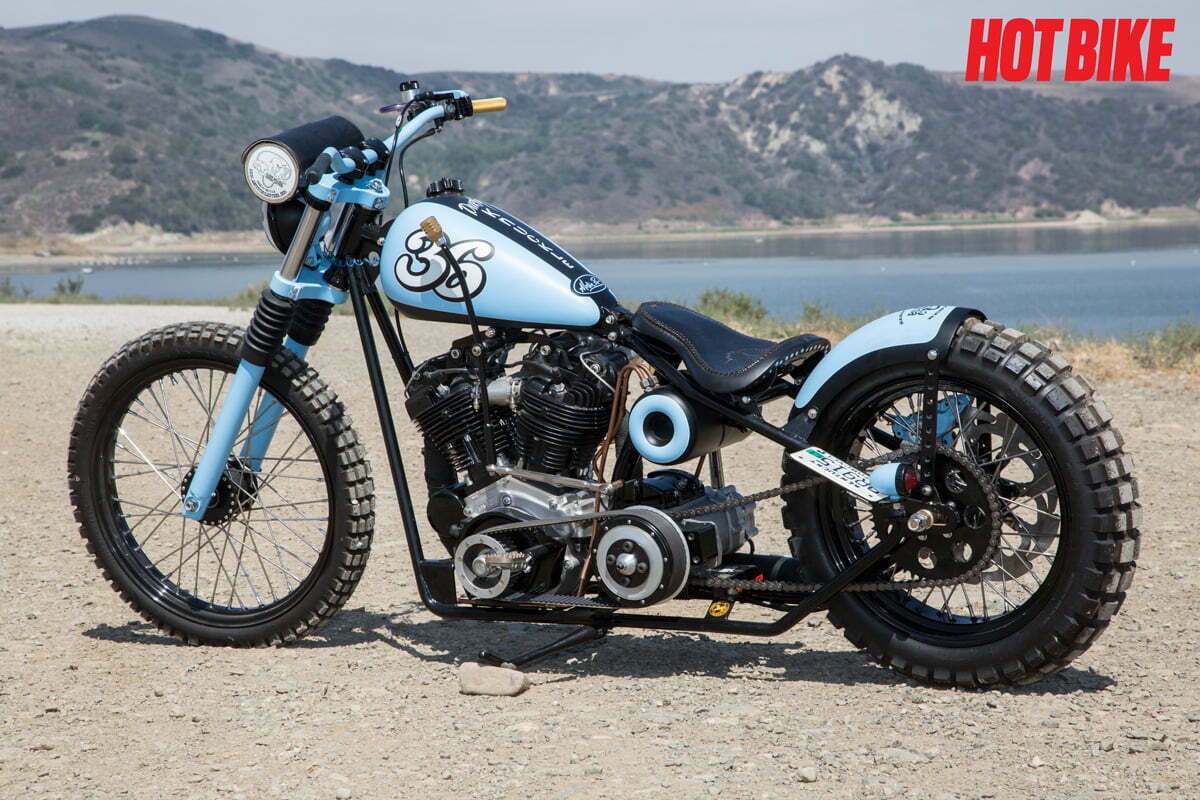 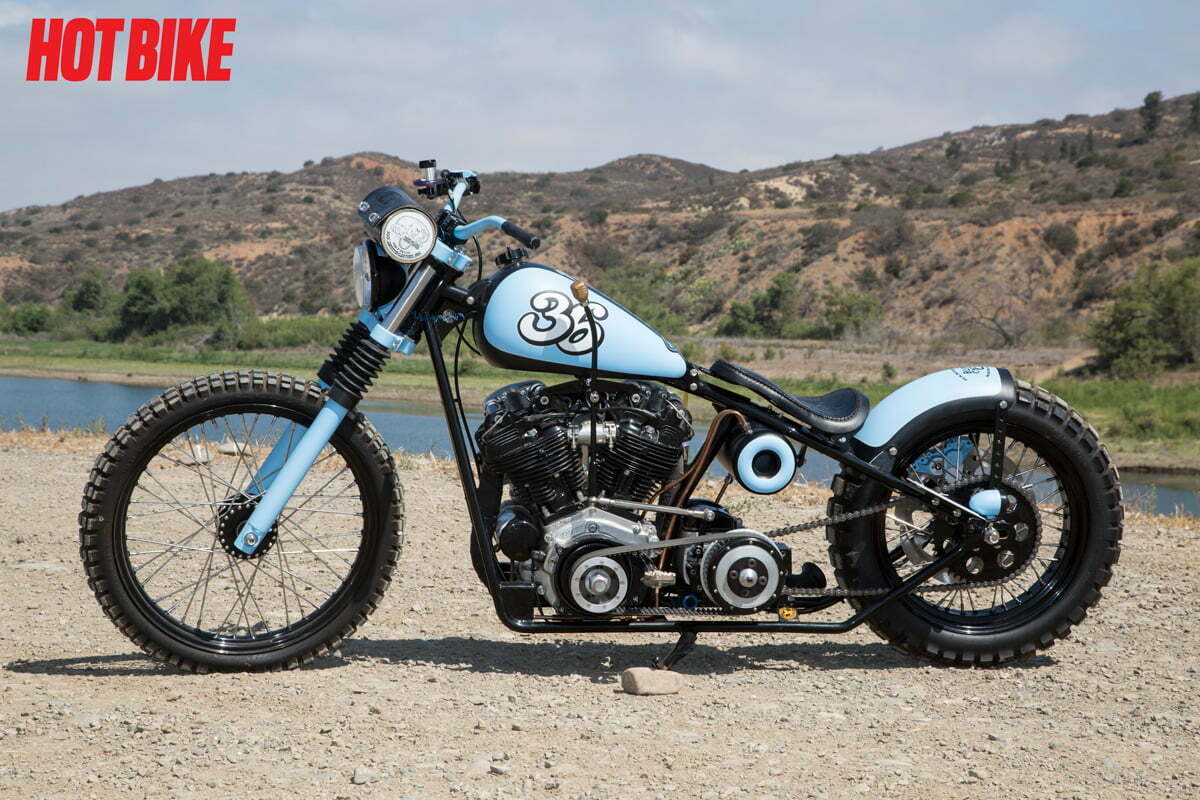 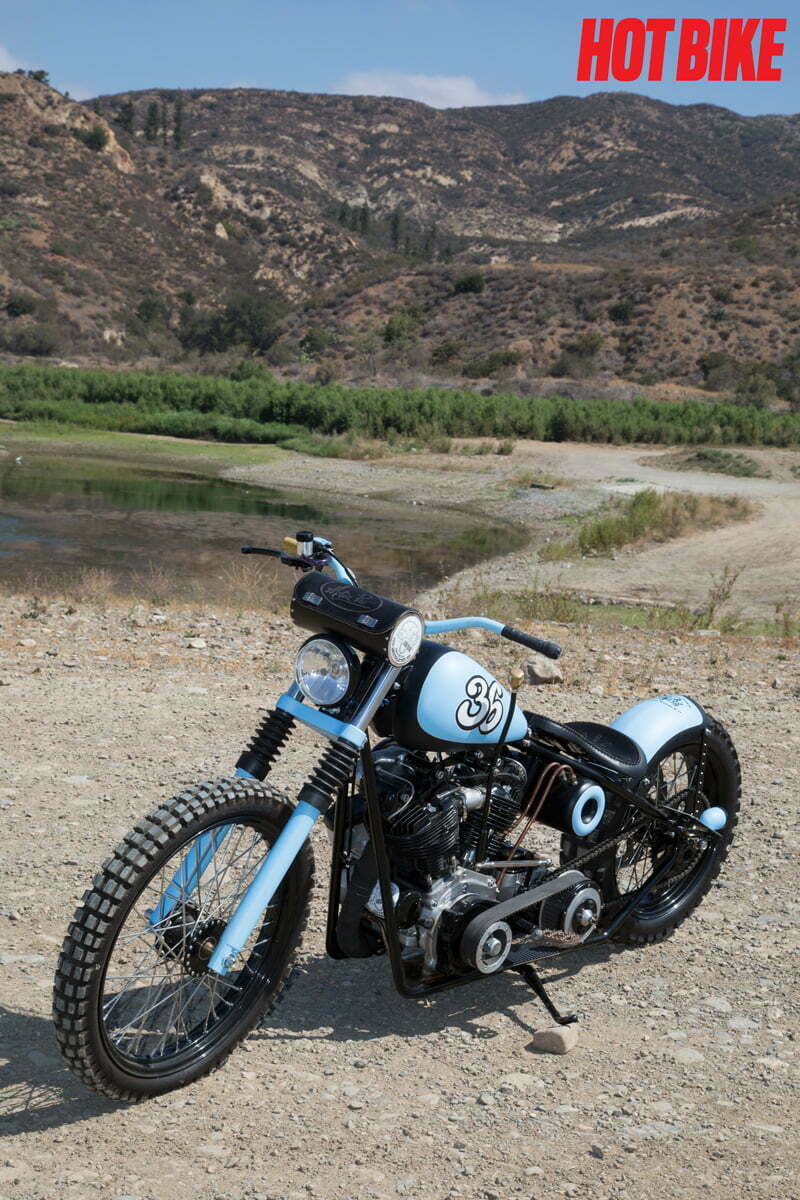 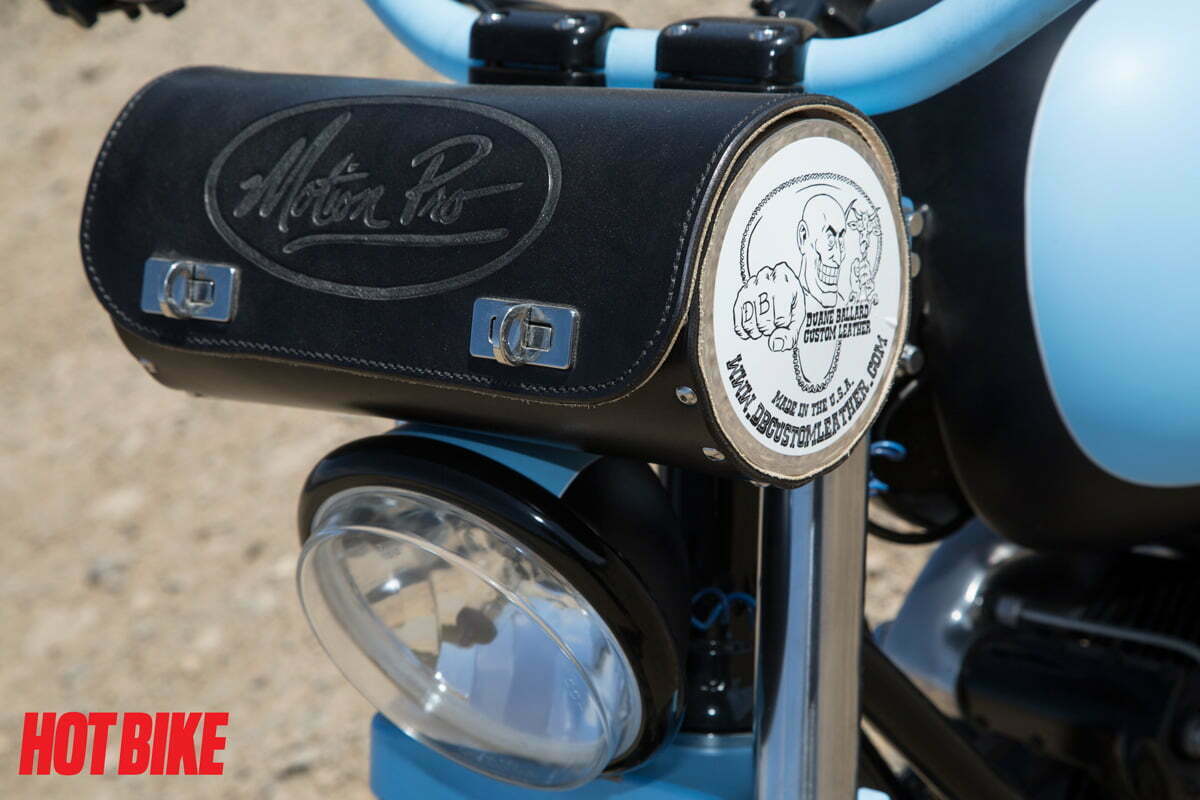 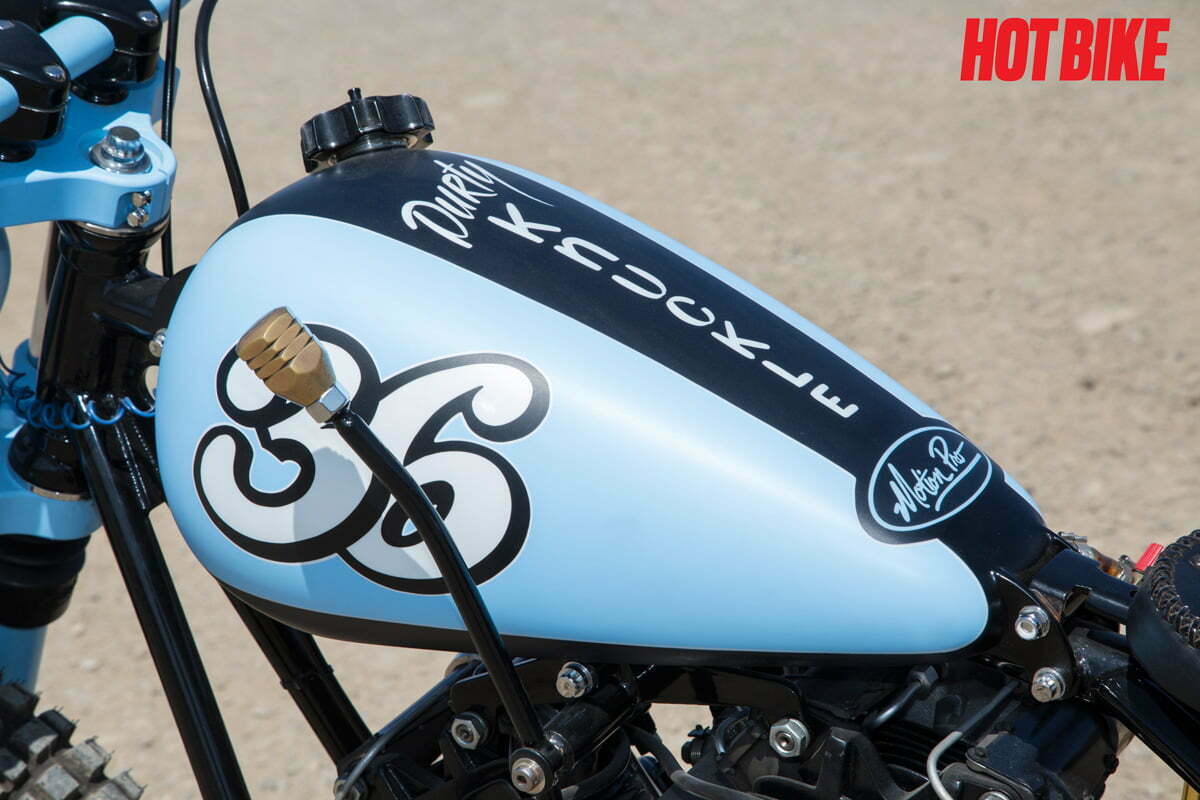 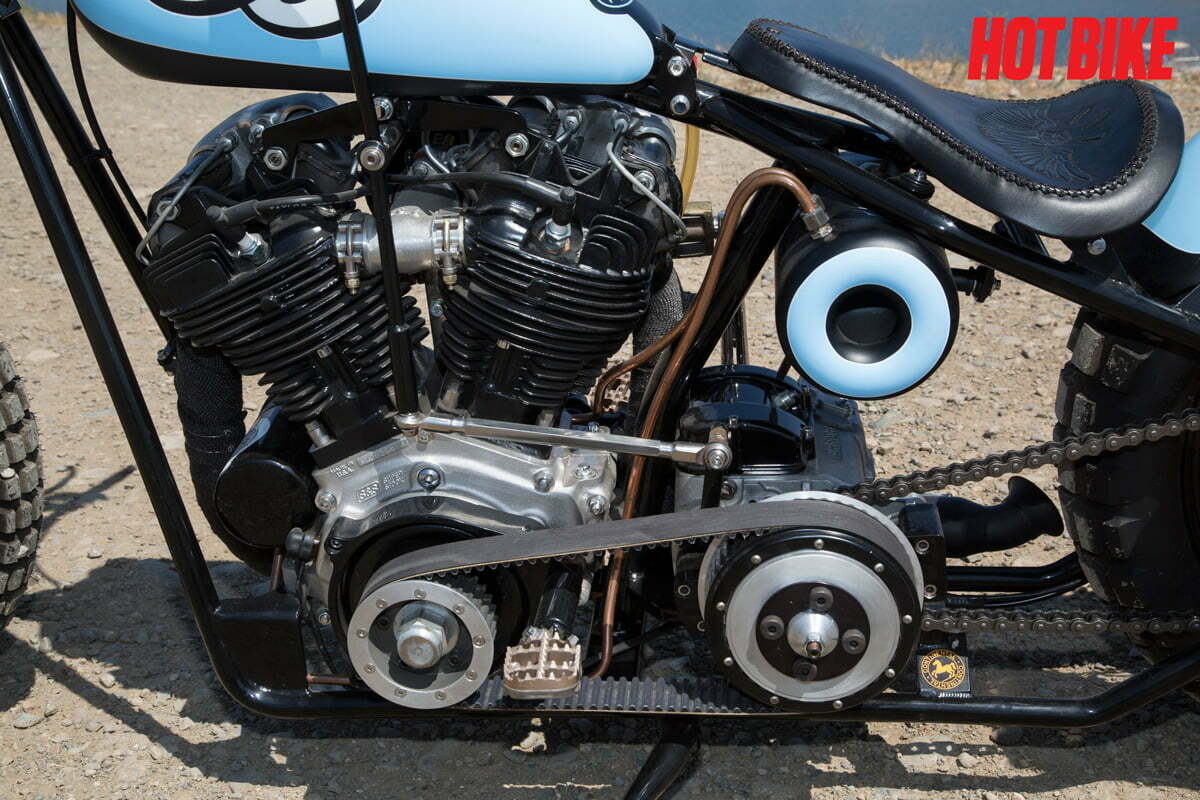 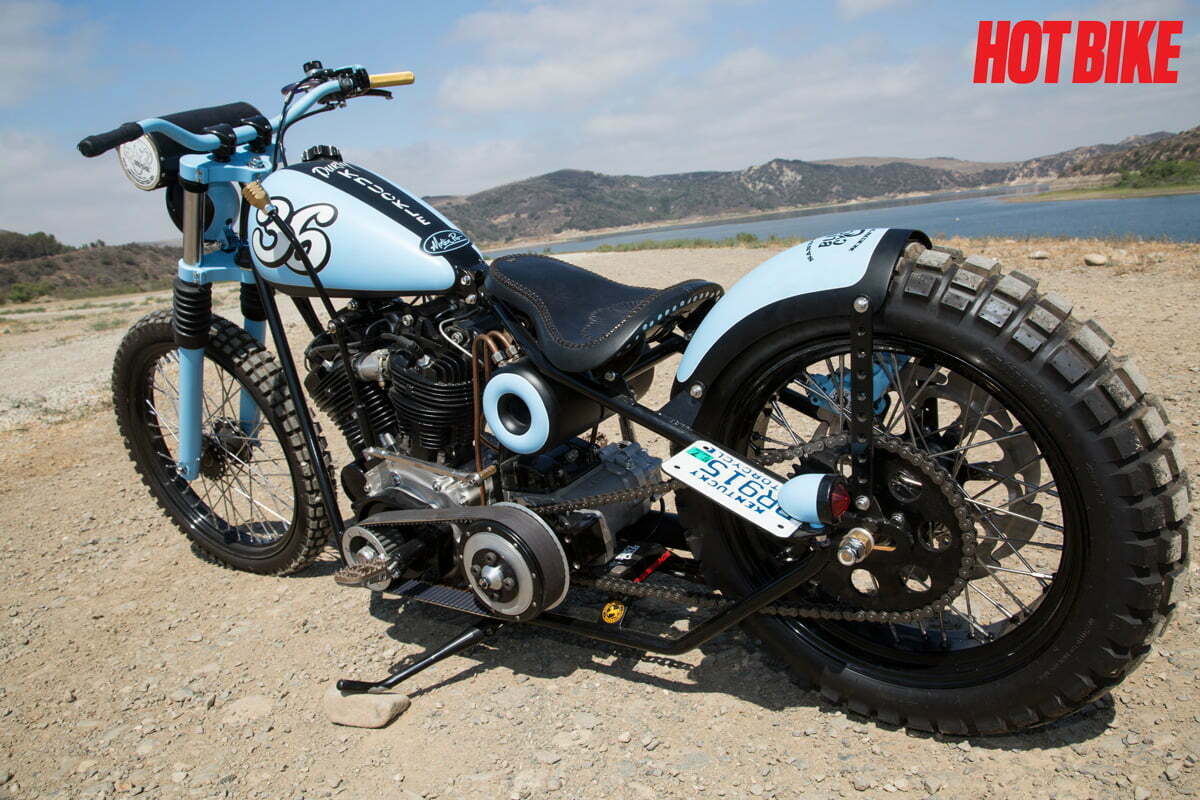 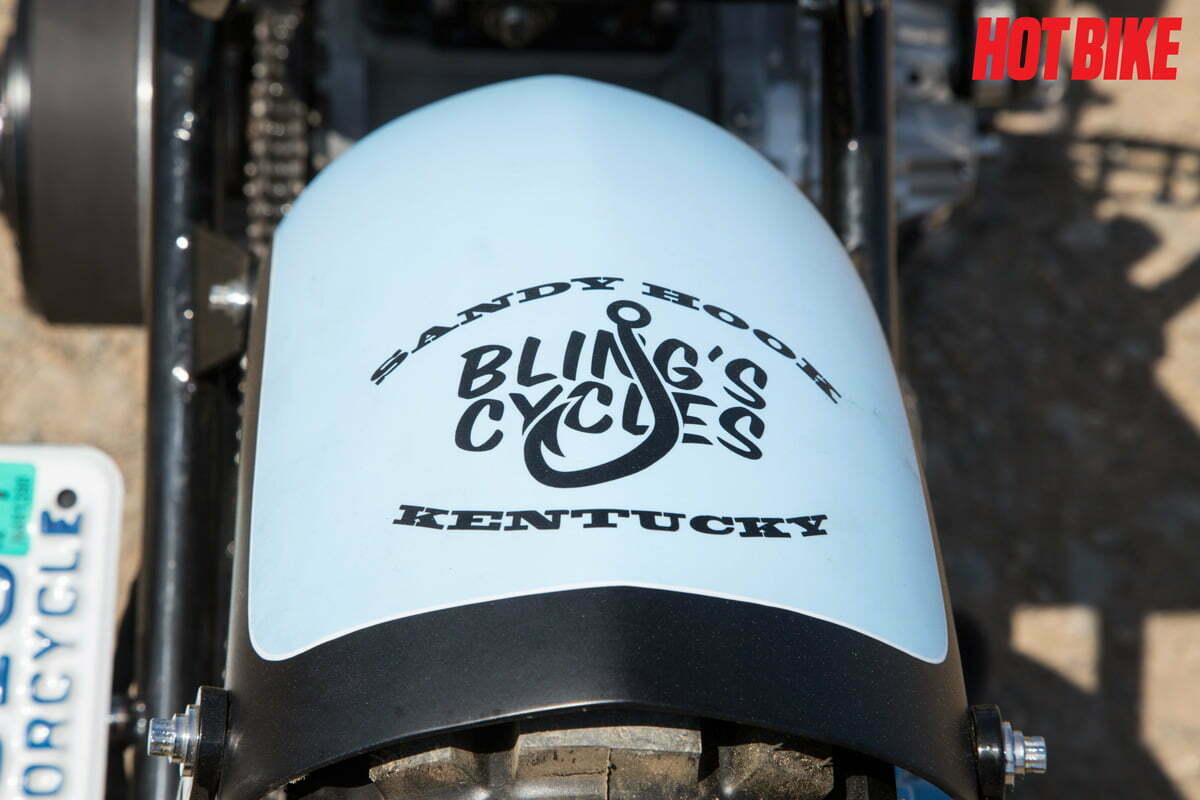 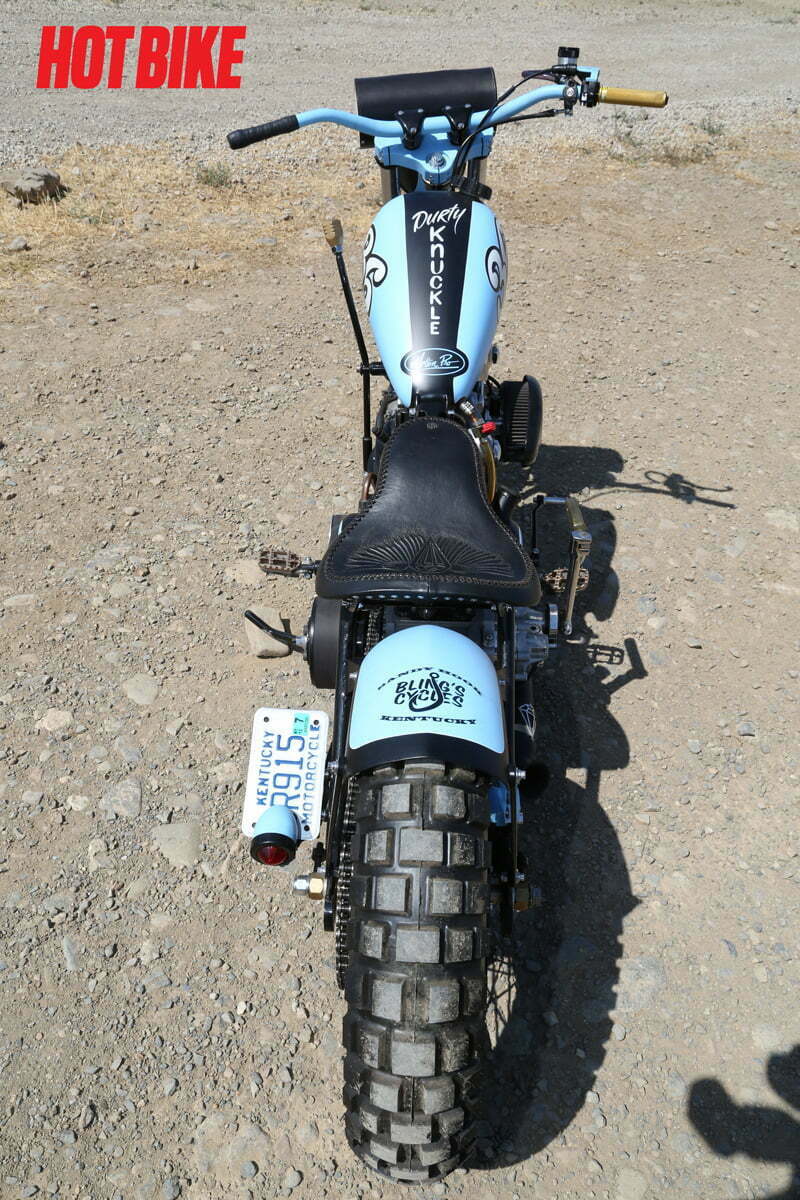 The idea for the Durty Knuckle came to be while working the Cincinnati V-Twin Expo show in 2010. I had contacted Bill Dodge of Bling’s Cycles prior to the show to see if he could bring a bike for the show to display in our booth. Bill and I go back to the time when he was shop foreman at West Coast Choppers—yeah, a long time ago! Over the years Motion Pro helped them out with many projects, and when Bill stepped out on his own we continued to help and support him whenever we could.

Getting back to the 2010 V-Twin Expo, Bill brought a bike for us to display at the show and I spent three days working the event, during which I spent a lot of time staring at the bike and admiring all the amazing details. Needless to say, the bike got lots of attention from attendees, and I got asked, “Is that yours?” so many times it got me thinking that it would be pretty cool to build a custom bike. At the end of the event Bill and I were talking about how well the bike was received, and I mentioned how many times I was asked if it was mine. Bill just looked at me and said, “Let’s do one for you!” How could I say no to that? So we decided to do an industry build and see what we could come up with in a collective effort.

Bill and I spent the next month or so talking about the idea and various concepts for the bike. Inspired by Motion Pro’s roots in off-road racing, we eventually decided to go with an off-road-inspired rigid.

decided to go with an off-road-inspired rigid

While the bike would be my personal bike, I’ve been with Motion Pro nearly 15 years, and the opportunity to build it wouldn’t have happened if it weren’t for Motion Pro’s support. So that seemed like a great way to make a unique custom and give respect to what Motion Pro means to me. Before Bill and I could start, I discussed the project with Chris Carter, the founder and owner of Motion Pro. Chris’ passion and support for the industry is unquestionable; he of course gave his enthusiastic support and gave me the go-ahead to spend some time working on it.

Once we had a plan of attack and the support of Motion Pro, I started making calls to all the guys in the industry who could assist with the project. First thing was to line up all the major components. My first call was to S&S to get a Knucklehead motor. Next I contacted Baker Drivetrain and got a Franken tranny lined up. For wheels we contacted Ridewright Wheels and got a set of spokes coming. Then we contacted our friends at Continental Tire and got some big knobby tires. I then contacted our local Tucker Rocky rep to get assistance with the pegs and bars. Next, I put a call in to Rivera Primo and got the primary on its way. With all the major things handled, we then started grabbing some parts from the stash of things lying around. I got a set of take-off 39mm fork legs, an old prototype Braking 13-inch Wave rotor, and of course a Motion Pro Vortex throttle assembly!

With the bulk of the items piling up, we then shipped everything off to Bill to start the build. As usual, life has a way of getting in the way, and this was no different. During the build, Bill ended up moving his shop all the way from New Jersey to Kentucky. However, we just kept focusing on it when Bill’s time allowed and my wallet could handle it.

All in all, the project took about two years to complete. Once Bill got going he would contact me with requests for components, and I’d get him what he needed along the way. The bike started taking shape, but several more calls were needed to iron out the final details. I contacted Goodridge for the brake and clutch lines, Brembo for the master cylinders, and we couldn’t have bolted it all together without Gardner-Westcott hardware. For the seat and tool wrap I contacted master leather craftsman Duane Ballard. Motion Pro is the leader in tools for the powersports industry,

Motion Pro is the leader in tools for the powersports industry,

so we had to have a nice tool wrap on the bike to keep a stash of essential Motion Pro tools.

As we got closer to completion, Bill contacted me asking about the paint. We wanted to have a number on the tank like a racebike, and we went with “36” because that was the year my father was born. The colors where something Bill came up with on his own, and he kept that as a surprise for me until the very end. The amazing thing is that Bill didn’t know that the color he chose, a beautiful Baby Blue, was nearly the same color my father used to paint all his bikes. Needless to say, I was amazed and really happy with the result. My passion for motorcycles comes from my father, so showing him some love and appreciation for that was important to me.

The plan was to complete the build and display the bike at the 2012 Cincinnati show. Right around the first of the year we got it all finalized and ready to go. Bill pushed extremely hard to make the final deadlines. Thanks to his efforts, the bike arrived at Cincinnati in time to be put on display at the Motion Pro booth and be seen by all for the first time. Bill arrived at the convention center and called me to let me know he was there. I went to meet him at the loading docks and saw the finished bike for the first time, and I was floored by what I saw. All through the show, attendees and the many industry guys who made this bike possible came by the booth to see the bike, and I think they were all as taken by this bike as I was. Motion Pro continued to display the bike at any event we could, and I got an overwhelming positive response all along the way.

I got an overwhelming positive response all along the way.

The opportunity to be part of a project like this was an incredible experience for me. I have spent more than 20 years in the industry, and I have to say that getting the support from guys in the industry I’ve come to consider close friends was the best part of it. The Durty Knuckle would never have come to be without the help and support of Bill Dodge of Bling’s Cycles, Motion Pro, S&S, Continental Tire, Baker Drivetrain, Rivera Primo, Gardner-Westcott, Duane Ballard Leather, Goodridge, Ridewright Wheels, and my unending thanks goes out to all involved.

As seen straight out of the box. Words and Photos: Jeff Leighton Coming from a Sprint and Midget car racing […]

Looking for the perfect heat wrap for exhaust pipes and mufflers? Well, here it is. Drag Specialties® exhaust heat wrap […]

Blundstone 510 Boot $170 us.blundstone.com Photo: Hot Bike Staff There are tons and tons of motorcycle boots on the market […]