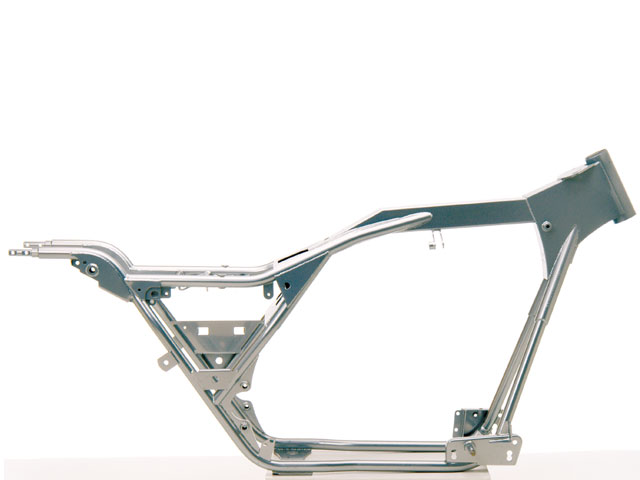 Here’s the basis for our Hot Bagger project, with stock rake and stretch, ready for Arlen and Cory. 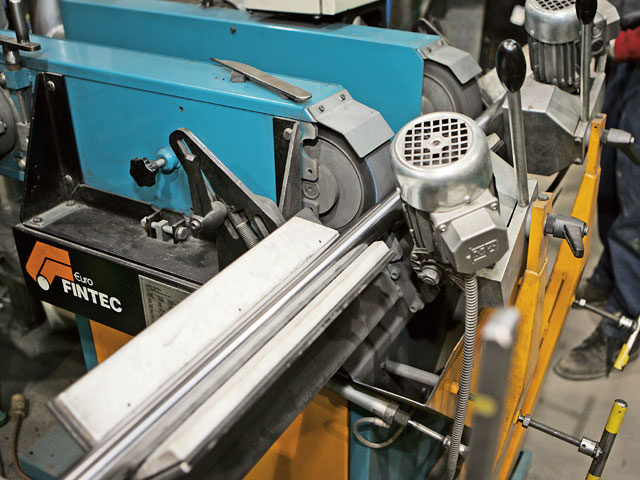 Before getting started on the frame build, the mild-steel tubing (1-1/8-inch diameter) was polished with a Scotchbrite belt. 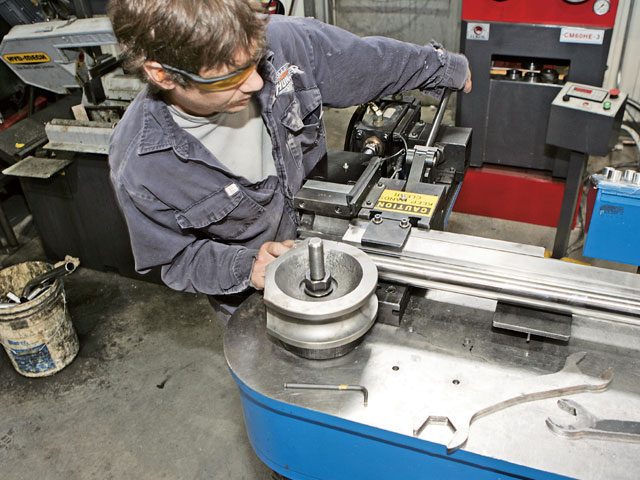 Next the tubing was placed into the CNC hydraulic mandrel bender. As the bend progresses, the mandrel is programmed to retract. The internal mandrel bends the tubing without distortion. 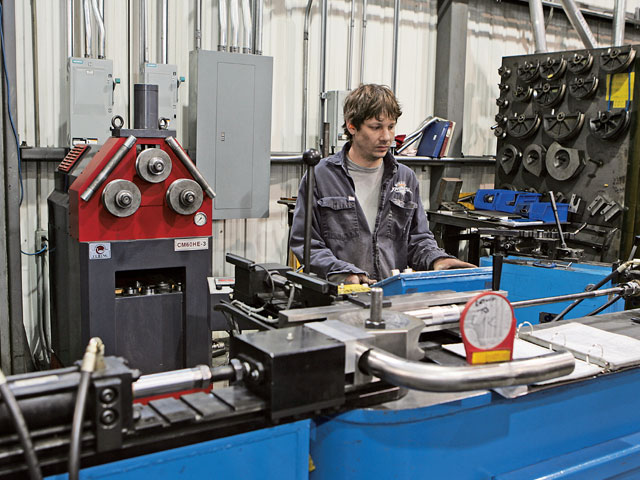 Here, Mikey is finishing up a bend with the withdrawn mandrel visible. 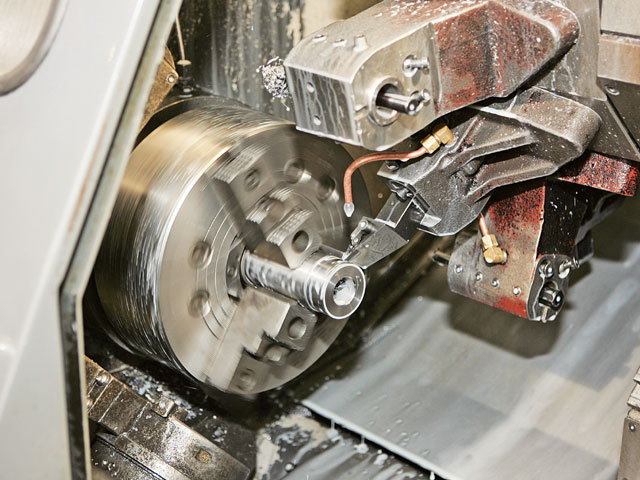 For the neck area, solid 2-1/8-inch round stock was placed into the CNC turning center and bored out both for the neck stem and the bearing races. 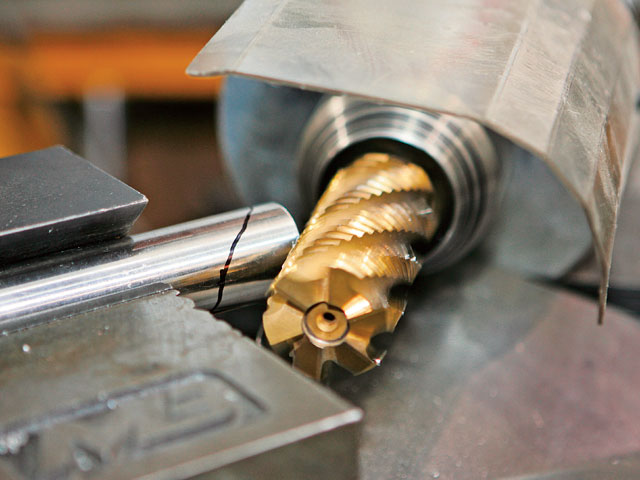 Here, a short section of tubing destined to be the seat side rail starts to get coped… 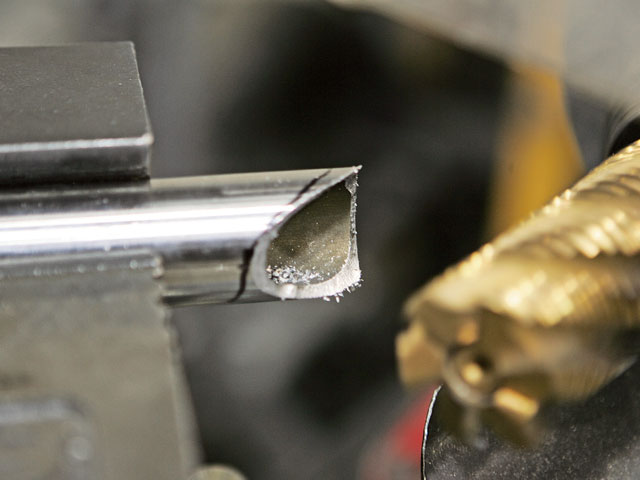 … at the proper angle to fit snugly against the mating frame sections. 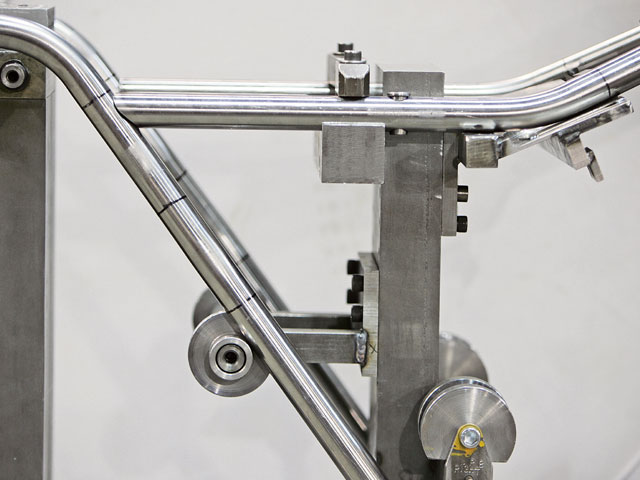 Here, the back end of the frame is being mocked up. As you can see, it’s a precision operation. 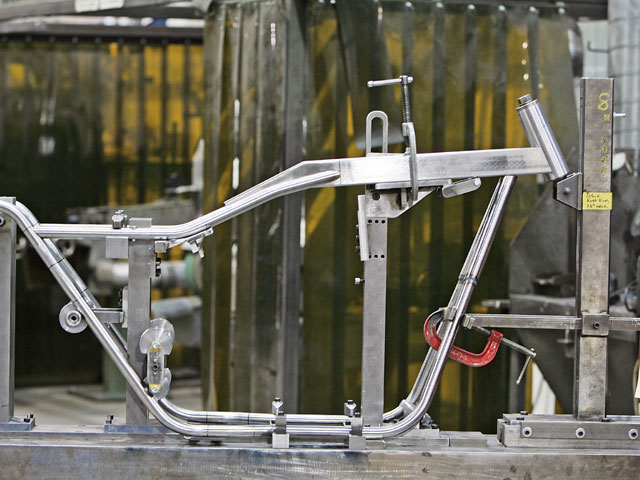 The downtubes all the way back to the shock mounts were bent from one continuous piece of tubing that started out as a single 9-foot-long piece. 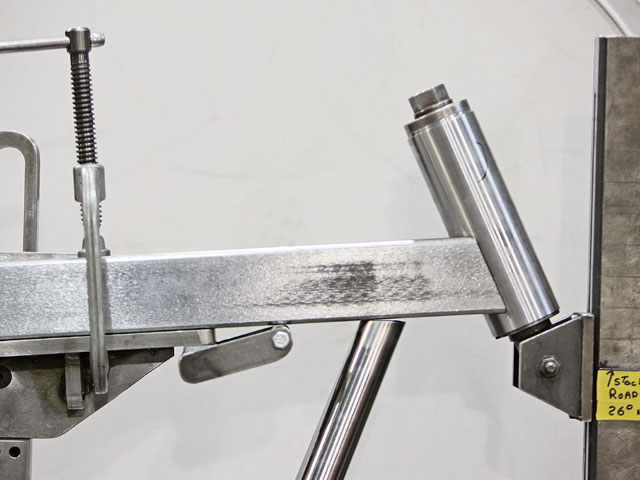 The frame was carefully loaded into the frame jig. The jig keeps everything straight while maintaining the necessary frame angles and dimensions.

The next step was to tack-weld the parts together before TIG-welding everything together with a handheld torch.

The laser cutter can slice through 1/2-inch-thick plate with a cut width of only 0.010-0.015 inch. It’s fast and efficient, having a smoother cut than a plasma cutter.

The Bagger frame uses a flat steel plate in the area around the neck joint and other stress points. A laser cutter was used to cut the proper profile.

Next up was TIG-welding the swingarm together for the 200mm rear tire we’re going to use.

Final grinding and finishing of the bearing insets was done on a vacuum table to catch metal grindings, making for a clean workplace.

Once all the welding was finished, the frame, swingarm, and assorted tabs were laid out on the inspection table, awaiting component fitment.

Before it leaves the factory, every frame Rolling Thunder makes gets a motor, primary, and transmission installed to ensure proper fit.

…followed by installing the swingarm and cross-shaft.

The oil-tank clearance was checked next…

Next, the swingarm bearings were installed…

…before checking swingarm offset with a ruler.

Following the installation of the rear wheel, alignment was measured with a laser level pointed toward the rear tire.

ig, comfortable touring bikes with storage galore are the ride of choice for many. Over the past five years or so, Harley-Davidson’s touring motorcycle sales have outpaced (as percentage growth) the rest of the Big Twins in the lineup. Maybe it’s the aging demographic, or simply the fact that touring bikes are smooth, plush, and convenient. Just gather your things, load up the saddlebags and/or Tour-Pak, thumb the starter, and hit the highway in luxury.

If you’ve followed HOT BIKE for a while, you’ve probably noticed we don’t feature many bagger-style bikes. It’s not because we don’t like them, but more due to the scarcity of ground-up one-off touring bikes. In fact, just to show how impartial we are here, we have assembled a team with some of the most talented people in the business to design and build a “Hot Bagger.” The entire build will be featured here on these pages. We have Arlen and Cory Ness on board to build the bike the way only they can, a new 107ci S&S; motor that was designed specifically for touring bikes (an upcoming article will detail that motor), a Baker six-speed transmission, and sheetmetal from Russ Wernimont Designs. For the base of the build (the frame), we went with Rolling Thunder Mfg., which is located just across the border in Chateauguay, Quebec, Canada.

Rolling Thunder builds frames in just about every flavor for the V-Twin market. If the company doesn’t have it, the staff there will make it to your specs. One of Rolling Thunder’s latest designs is an FL-style rubbermount frame (RT Bagger; MSRP: $3,450) that can accommodate a 200mm rear tire (it’s also available as a direct replacement frame). Other than the wide swingarm, every single feature and nuance of the frame matches H-D specs, from the motor mounts to the gas-tank mounts. It’s perfectly straight, and all the components are designed to fit into position flawlessly. In addition, it accepts stock OEM drivetrain components and plug-ins, H-D wiring harnesses and modules, and even has a provision for OEM fork-lock mechanisms. The Bagger frame showcases the power behind the company’s manufacturing prowess. The frame symmetry comes from the latest in frame-building engineering technology, utilizing a coordinate measuring machine (CMM) arm for accurate measurements, as well as a CNC laser cutter to produce razor-sharp cuts time and again. For custom applications, this frame is also available with a tubular backbone for flexibility on downtube and backbone stretch and rakes.

We’re going to give you a glimpse into what it takes to make the Bagger frame we’ll be using for our project. At Rolling Thunder, the manufacturing proceeds along a rectangular assembly line of sorts, with each “station” adding to the frame before it’s checked for straightness and fitment of components, such as the motor and transmission.

The group consensus is that it’s going to work. Spencer Racine, Sam Pileggi, and Skeeter Todd look on as machinist Todd takes measurements. Every angle and dimension was checked before the frame got the thumbs-up. Stay tuned for upcoming issues of HOT BIKE for the complete ground-up Hot Bagger build.

It’s interesting how sometimes a simple phone call or comment can lead to a series of astounding events. This past […]

To match the green flake paint, a green tinted Glass Jaw velocity stack from Paul of Bare Knuckle choppers was […]