I’ve worn my share of helmets from most of the major manufacturers over the years, but somehow I never knew AGV was responsible for the very first 100-percent fiberglass hat back in the ’50s. On the 70th anniversary of that breakthrough, AGV is releasing the world’s only modular helmet built entirely of carbon fiber—the SportModular.

We got our hands on one a few weeks ago, and were impressed just by picking the SportModular out of its extravagantly packaged carton. Those of us who haven’t spent a lot of time around carbon fiber forget how light the stuff is. With tight tolerances, solid ratcheting points, and an elegantly minimal shape, the AGV slid onto onto my moon-shaped noggin (be sure to rotate the chin bar up first) without much drama. Although the interior liner didn’t feel overly cushioned against my skin, the fit and finish of the surfaces are top-notch (as with any helmet, get it fitted in person by a professional). 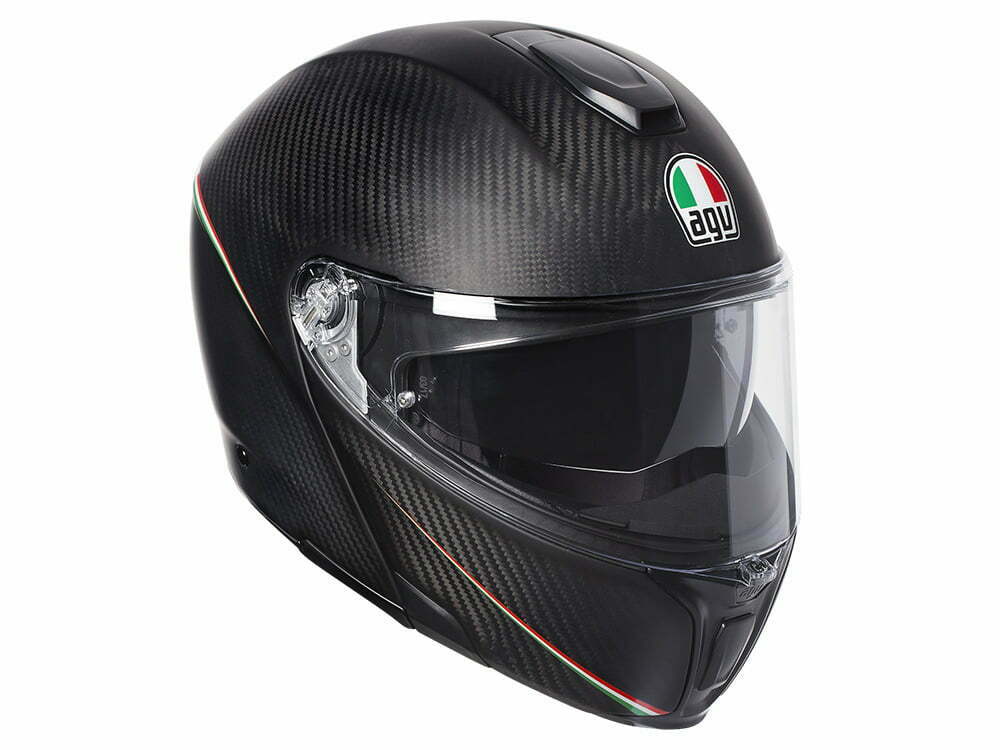 With its slim, elegant lines and a sport-derived design, the new AGV SportModular hits all the right aesthetic and aerodynamic notes. You won’t believe how lightweight it is either.

On the bike, stability and aerodynamics at speed are the qualities touring riders look for, and on that front the SportModular delivers. AGV says the SportModular benefits from 1,000-plus hours of wind tunnel testing, and I felt little to no buffeting even past 85 mph. The helmet sealed well around my head, without any attendant hot spots on rides of several hours. Ventilation is also pretty effective here considering there are only two large intake vents—a large three-step opening at the mouth, and one at the top of the forehead. An adjustable three-step rear spoiler takes care of exhaust duties, keeping air flowing while enhancing stability (and as a bonus, helping to deflect rain). The flip side of all this breeziness is that you’re going to hear lots of wind noise; it’s no secret that flip-ups, due to their necessarily clunky mechanics and (occasionally) blunt designs tend to be noisy as hell, and in that regard the AGV is in line or noisier with the rest of the segment (though aerodynamically it feels superior). 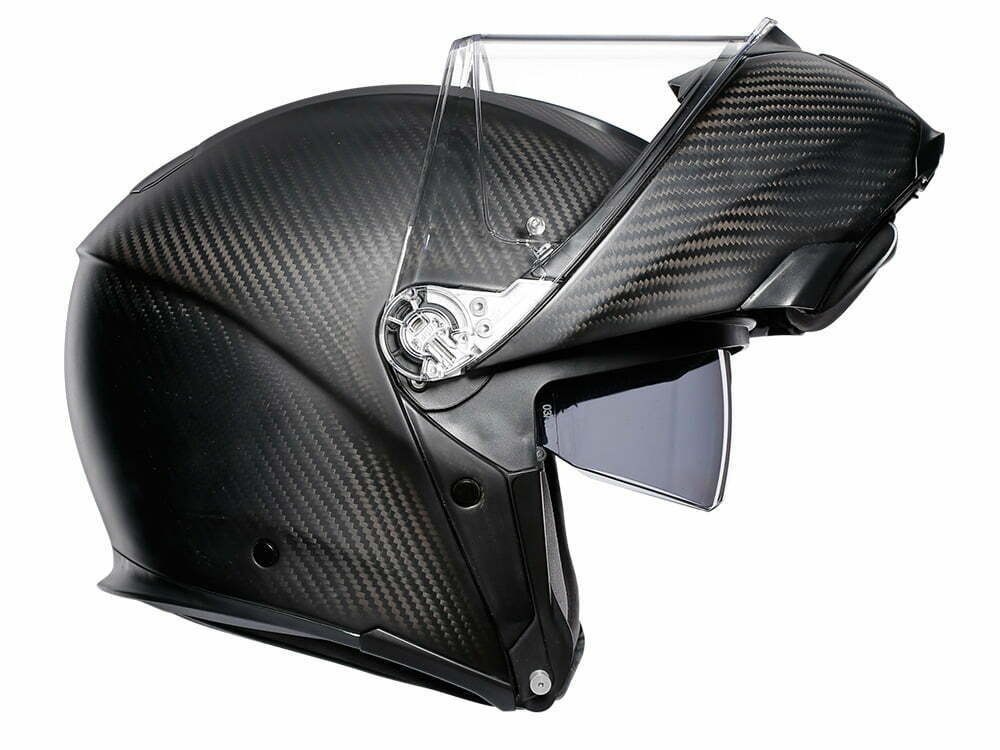 The chin bar flips up on metal hinges when the red tab under the chin is engaged. A smoked drop-down visor gives your eyes some relief from the sun.

Inside the helmet, a removable anti-bacterial and hypoallergenic microfiber liner can be flipped over—choose either the warm or cool side, to match conditions you’re riding in, which is a pretty handy feature. But AGV also says the SportModular emphasizes a “compact shell design” and eschews added bulk, so the liner is not as cushy and luxurious as others in the class.

There are plenty of premium goodies though; AGV tells us the SportModular meets the same safety standards as the Pista GP R, its top race helmet used by MotoGP riders. Also welcome is the panoramic 190-degree views from the eyeport, which is covered by a distortion-free shield with 85 degrees of vertical view and Class 1 optics, all anchored by low-profile metal hinges. Adding more points for versatility is a double Pinlock insert and an integrated drop-down anti-scratch sun visor, which is easily removable as well. But AGV’s Visor-Lock System proved a little tricky; while its micro-latch locked the shield down securely, we found it fussy to operate with gloved fingers. We have the same criticism about engaging the chin bar mechanism—it’s a tight squeeze for a leather-covered finger. 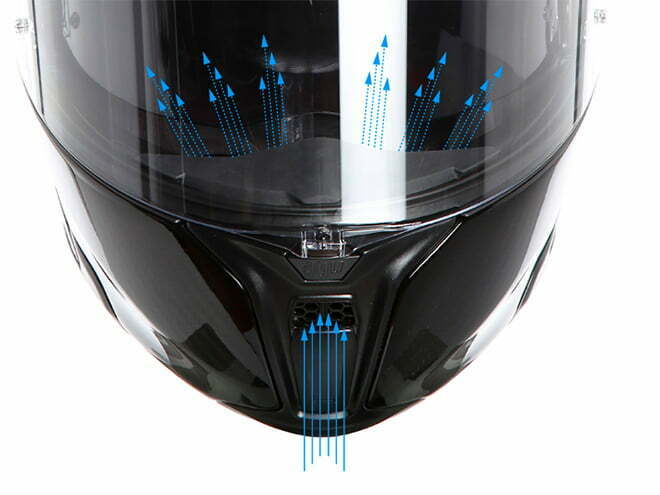 Although venting (via two intake tabs) is prodigious on the SportModular, that large volume of air coming in is also pretty noisy.

AGV says “the revolutionary SportModular…(is) combining the practicality of a modular helmet with lightness” (it’s just 3.06 pounds, 1,388kg, depending on shell size). In this category, its natural competitors are the recently released Shoei Neotec II and Schuberth C4—retailing for $699 and $749, respectively (for the base models), and I’d argue the SportModular is easily the lightest of the three. If you’re a distance-riding junkie like we are, that means a lot. With the SportModular excelling in aerodynamics, ergonomics, ventilation, and field of view, it slots very favorably into this class, and we’re looking forward to spending the next month with it on tour. Stay tuned for updates. 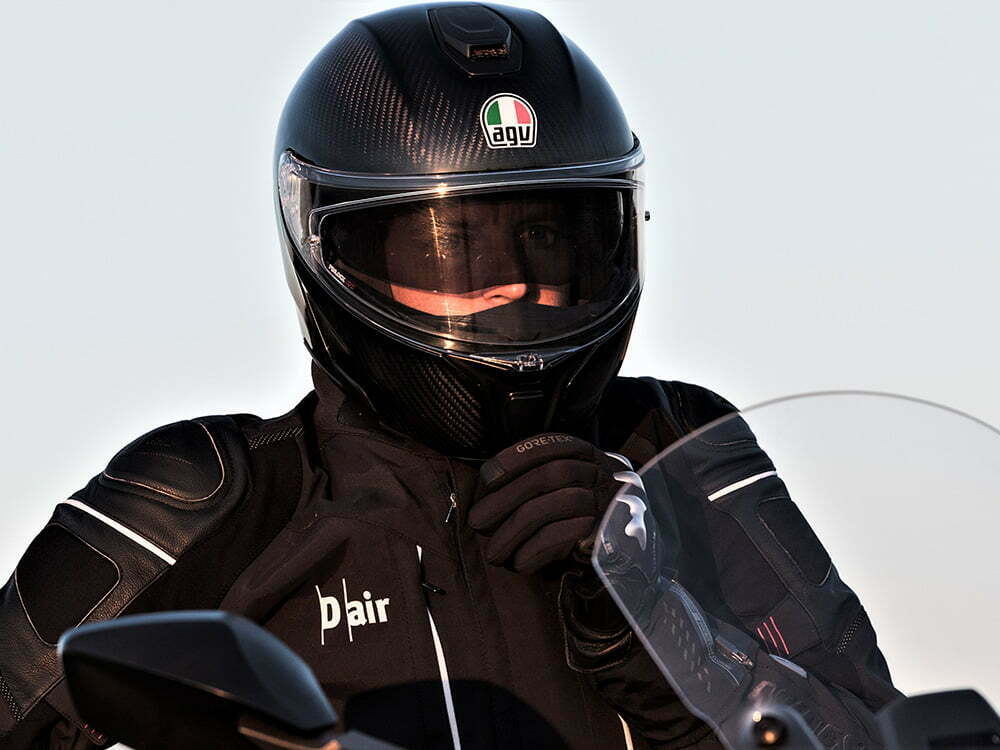 Touring riders are sure to appreciate the SportModular’s lightest-in-class weight and on-bike stability, especially on longer rides.

A Day at the Drags with Vance and Hines

Here is a quick clip and a few photos from behind the scenes with Vance and Hines drag racing.

[email protected] A while back I was spacing out watching TV when something caught my attention. At the bottom of my […]

Each year the Kids & Chrome fundraiser gets bigger and bigger. It’s a great charity event benefiting the Children’s Home […]