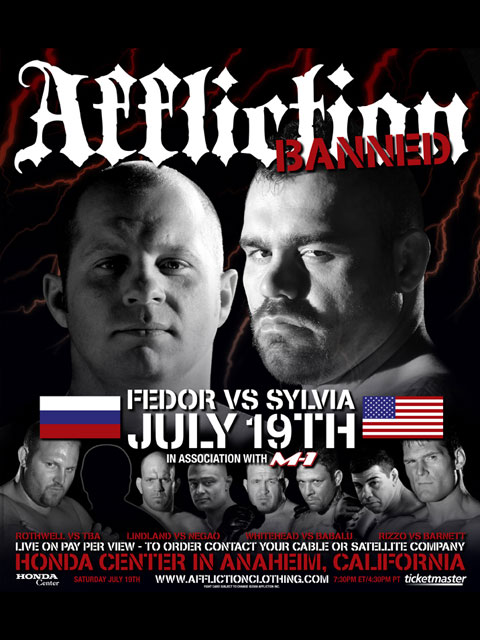 “Affliction Banned” will be distributed on Pay-Per-View and air live (9 PM/ET, 6 PM/PT) on cable and satellite viewing in the USA and Canada via iN Demand, TVN, Shaw Communications, Viewer’s Choice Canada, DirecTV, DISH Network, Bell ExpressVue and Star Choice for a suggested retail price of $39.95. The telecast will be available in both standard and high definition television.

Fedor (27-1), the former undisputed PRIDE heavyweight champion and Russian M-1 legend, has been universally recognized the past five years as the most dominating heavyweight in the world. He will face former 2-time UFC heavyweight title-holder Tim “The Maine-iac” Sylvia (24-4), fighting out of Iowa by way of his native Maine.

The exciting four-fight undercard is loaded with Josh “The Baby Faced Assassin” Barnett (21-5), of Seattle, facing-off stateside for the first time in two years in a grudge match against the only opponent to ever knock him out, Brazilian strongman Pedro “The Rock” Rizzo (16-7).

Tickets are scheduled to go on sale May 20th at the Honda Center box office and through Ticketmaster.

In part 1, we enlisted our buddy Danny Wilson, a.k.a. the Motor Witch to install the bottom end of our […]

From the Editor The other day while I was sitting in my office our publisher, Jim Adolph, walked in and […]