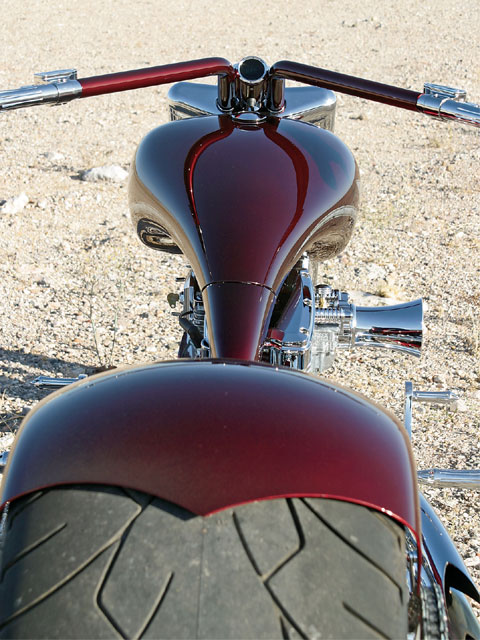 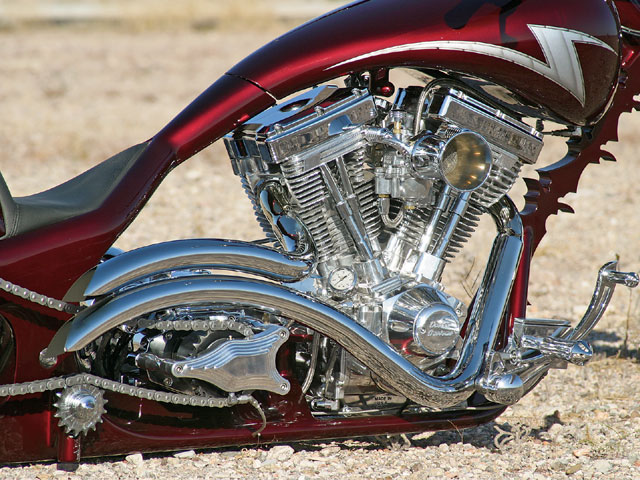 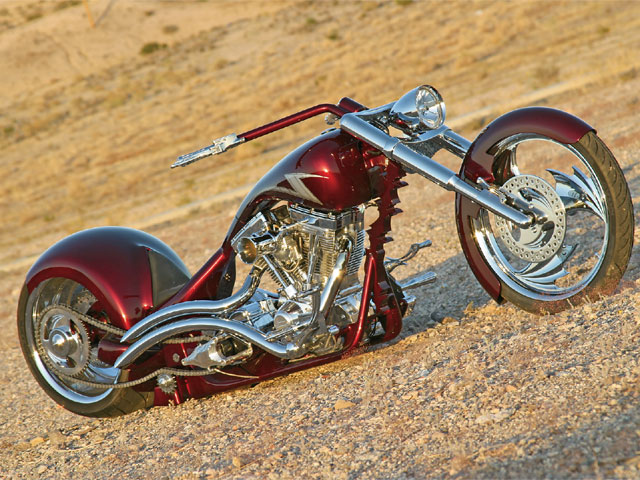 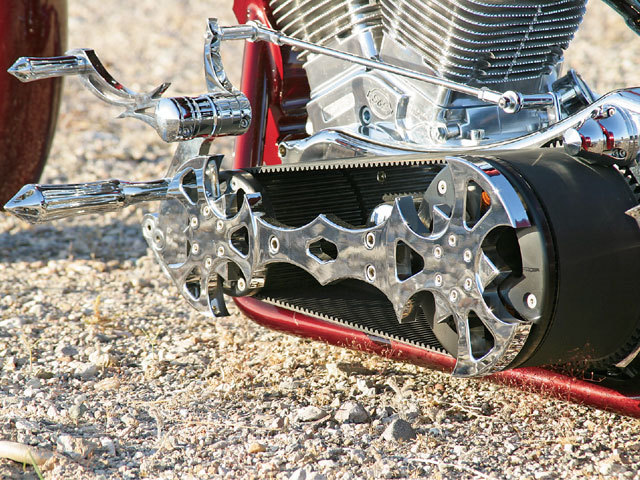 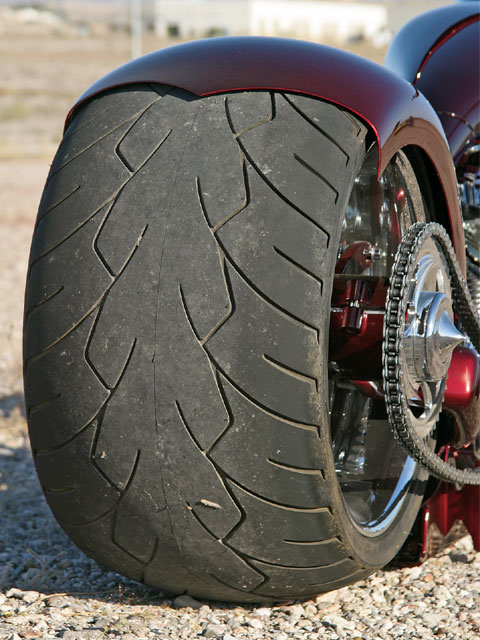 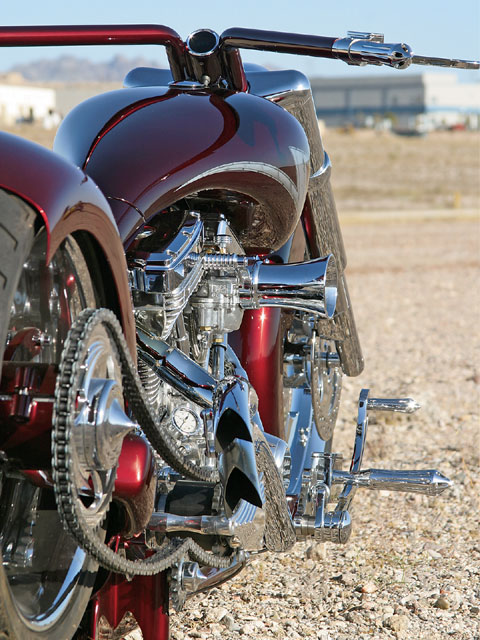 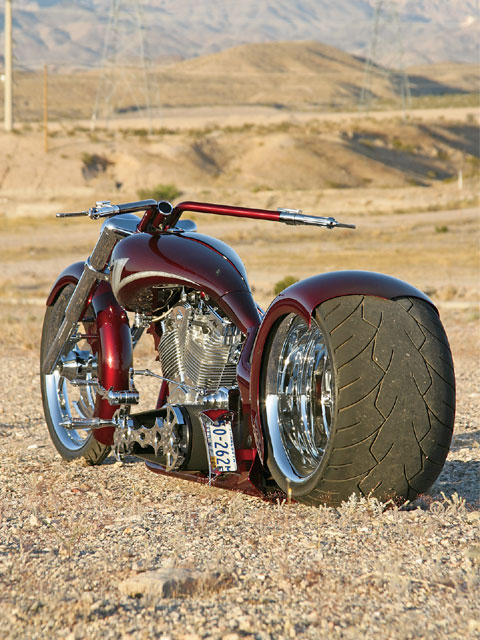 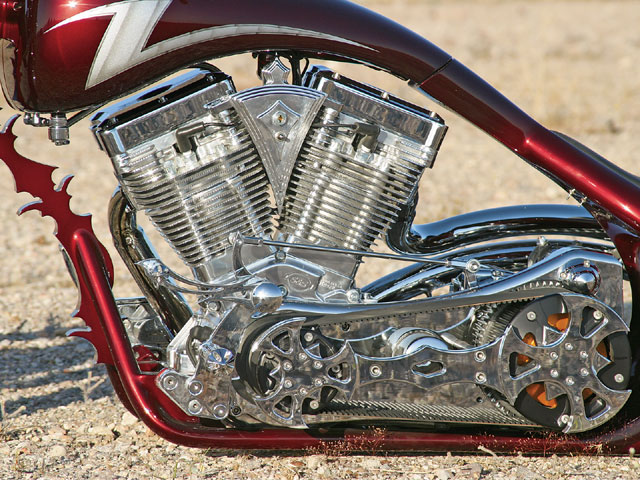 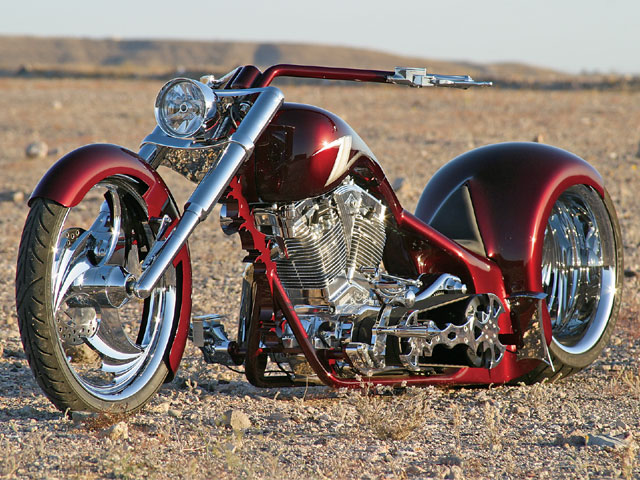 Brad Ilse must really love his wife, Sherry. You’d have to love someone to create a bike like this for them; you have to really want to make it happen. That’s because there’s a lot to this bike, and we’re not just talking about its long length. When Sherry came to her husband looking for a long, low, fat-tired sled, he threw himself into making it come about and added some pretty ambitious fixings to the mix.

For starters, he loves single-sided-swingarm bikes and took on the huge challenge of building one around a monster 360 back tire. It was a laborious process. “We made a rat bike as a tester first,” Brad informed us. “So we could work out problems with swingarm flex.” While he was at it, Brad also made the swingarm the bike’s oil tank. This was just one in a series of ways he took his wife’s vision over the top.

But Sherry wanted her bike to be long as well as fat-backed. Really long, and that meant other obstacles. Her hubby rose to the occasion in spades. As you’d expect, he cut and welded a frame of big dimensions: 45-degree rake at the neck to kick out the frontend, 6 inches of stretch outward, and 2 inches under in the downtubes. He also used a longer RMD primary drive and chain final to fill the increased distance between the motor, transmission, and sprocket created by the chassis and swingarm.

Mrs. Ilse’s third requirement for her scoot was that it had to be low. Part of this was facilitated by the low seat height built into the chassis, but the Platinum air suspension plays a big part here, too; Sherry can raise it up or slam it to the weeds with the push of a button. However, Brad gave her an added bonus. He built an air reservoir into the frame so Sherry doesn’t have to wait for the system to build up air during adjustment.

But beyond all of this, there’s Brad’s pride in his work. As you look at this bike, the things we’ve noted above are pretty obvious, but it’s the small details on a big bike that make or break it, the subtleties that tell you how much pride the maker took in his work. Part of this comes from how precisely everything flows together, and part of it comes from how clean it all looks. Brad took great pains in both areas, from the tight fit of the fender to the smooth curve of the gas tank along the backbone and on to the swept-back handlebars he made and that house hidden cables. Then there’s the pointed seat; it fits to the fender and frame so well you barely notice it’s there.

The rest of Sherry’s ride, however, is hard not to notice, and that may have been her plan all along as she tears it up with Brad on weekend barhops. It’s hard to say what gets more attention at their local saloon, Sherry or the bike. But when the guys see her petite frame jump in the saddle of this 360 monster and roast it out of the parking lot, jaws drop and the B.S. stops.

J&P; Cycles contributed to a recent episode of ABC’s Extreme Makeover: Home Edition. If this is something that would interest […]