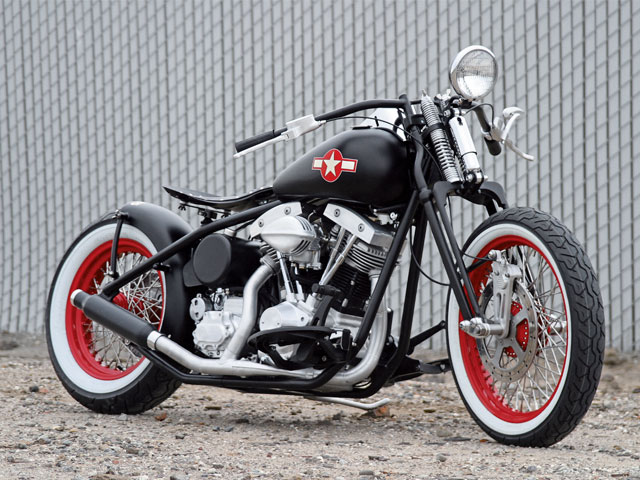 Funny how some people want nothing to do with the design or build of their “custom” bike. Many folks walk into a bike shop or dealership and select a “custom off the floor” and are more than satisfied. For those easy-to-please folks, these are rich days with plenty of iron to choose from. Small shop, big shop, little manufacturer, big manufacturer, you name it-the American V-Twin market is wealthy in choices, if not innovation. These bikes (“factory customs”) are ready to roll off the showroom floor and into the garage-voil-instant custom with no wait.

On the other hand, you’ve got folks such as Laurent, owner of this beauty of a black bobber, who are not satisfied with anything “stock,” even if it is a “custom.” As Joe Curtes and Chucky Fryman, friends and partners in Huntington Beach Motor Cycles (HBMC), told us, “Laurent has a few bikes. One of them is an over-the-top Road King, super-shiny and fancy with a big burly motor-quite the show piece-so this bike was designed to be the anti-Road King.” Well, based on the pictures, Joe and Chucky achieved their goal.

But before we get into the nitty-gritty of the bike itself, a little background on the perpetrators of this story is most certainly in order. Chucky and Joe pride themselves on building stylish, reliable bikes that not only physically fit their customers, but also match the vision of both their clients and themselves. Many of the shop’s customers are professional people who trust that they will get a well-designed and great-looking bike from the duo with no drama. Most of the shop’s customers leave the cooking to the chefs. With good results, we might add.

Basically, HBMC works with its customers; the crew there doesn’t dictate or demand. Joe Curtes, a long-time snowboard professional, was a friend of Laurent, an avid rider. It was only a matter of time before the Frenchman asked his talented friend to create a bike for him. Laurent, being a very particular man, had some strong ideas about what he was looking for, and knowing how HBMC operates, knew he’d get what he wanted or would get the straight poop if what he wanted didn’t work or wasn’t feasible.

So began the build of the Dept. 85 bobber you see here. The reference to Dept. 85 is Laurent’s way of giving props to his hometown in France. You see, in France, rather than states they have “departments,” and Laurent was raised in Department 85. Some might say that’s not as sexy as Los Angeles or New York City, but to Laurent that mattered not one bit-home is home, no matter what its moniker.

Joe, bringing his friend’s job in-house to HBMC, started planning the build with Chucky. Normally one of the partners would be the lead in a build, with the other a supporting player. This build was different in that the two partners collaborated on all of the details along with the customer. Often this results in a mishmash of parts and conflicting ideas, and a bike that looks confusing. This is not the case with HBMC; the guys there know what works and what doesn’t, and are experts at selecting just the right parts to make a bike “sing.”

After consulting with Laurent, they had a good idea of his requirements: red spoke rims, wide whites, and of course flat-black paint. This bike, being the anti-Road King, also required that it be a hardtail and a shovelhead. Since Laurent is a rider, the bike had to be a rider as well, so all-new top-shelf technology was used-S&S; shovel-style motor, Performance Machine hand controls, Sputhe transmission and primary, Kraft Tech frame, and so on. New technology meets old-style looks.

Chucky and Joe were psyched. The bike was to be pretty straightforward, and they had a clear vision, a healthy budget (since their customer wanted only the best parts on his bike), and nine months to make it happen. Selecting parts for a specifically styled bike that play together nicely is not an easy task. Selecting modern parts to re-create a “period piece” is even tougher. Most modern bike parts appear just that-modern-and lack the vintage look that was needed. As Chucky relates, “Joe is brilliant at selecting the parts we need for a bike; he just knows what will work.” From the looks of this bike, it is obvious that Joe studies the catalogs and knows his craft.

A Kraft Tech frame was selected for the foundation of the bike. You’ll notice that the frame for this bike is made of a larger O.D. tubing than is normally seen on most modern bikes (other than possibly a Bourget). It looks super sturdy and has the tough and ready-to-go attitude that the partners were looking for. Mated to a Paughco Springer, the bike had the stance they wanted with no additional work necessary. Red rims were a must-have, so they were sent out for a vivid red powdercoat. Chrome spokes, PM and Exile brakes, and wide whites finish off the wheels-sweet.

With the husky frame, frontend, and wheels in place, the duo settled on flat-side 5-gallon Fat Bobs with a cat’s-eye dash. While some might take exception to a cone motor as opposed to a slab-side generator case in a bobber, there was a reason: The Sputhe primary drive they were considering had an integral oil-filter mount, negating the need for the slab-side case’s oil-filter mount. Besides, the cone motor was readily available. It was an easy decision.

Sputhe also provided the bulletproof transmission. There was no need for a six-speed with this bike; the standard five-speed would more than suffice in transferring power to the ground, and the belt drive is a beauty of a part. All of the naked aluminum on the bike was rubbed down with Scotchbrite by the intrepid builders, giving the bike a rich, lustrous look.

After that, it was all in the details. As an example of bending to the wishes of their customer, the bars made in-house were reminiscent of beach bars; this is not necessarily the way that HBMC would have gone, but they work well and are comfortable. The seat, a police unit, was stripped of its leather cover and re-covered to the specs of the builder. Mated to the seat is an Exile suspension seat post, pricey but necessary for a rigid in this day and age.

The paint was all Laurent; he’s loved the “stars & bars” forever, and this was his chance to get them applied to a bike that was just dying for a patriotic touch-to keep it simple, he used the same red that the wheels wore. The ceramic-coated, HBMC-built two-into-one pipe has some of the vintage mojo the partners wanted to sprinkle on the bike, and the Goodson air cleaner tops off the build in a period-appropriate style. In stepping back and looking at the Dept. 85 bobber, it is clear that the partners succeeded in creating a new-tech, old-style type of bike that is timeless and well put together.

As it turns out, this was the first and last bike that Joe and Chucky would collaborate on as partners. Joe, having had his fill of the SoCal scene, decided to beat feet and head off to clear his head and regroup. Chucky stayed the course and soldiered on, continuing the tradition that he and Joe started. In the end Joe started his own company, which can be found at www.Garage864.com, and plans to keep building bikes. He and Chucky remain friends and still work together on occasion, proving that friendship and collaboration are the motivating factors behind success.

How should I customize my V-twin next? We’ve all been facing down the barrel of that particular gun at one […]

(Viola, WI) S&S; Cycle Inc. introduces their new Stock Replacement Parts Catalog. If you need to fix a Harley®, you […]