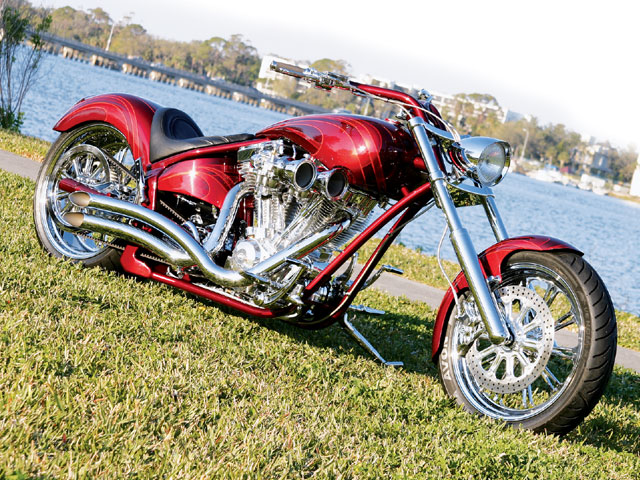 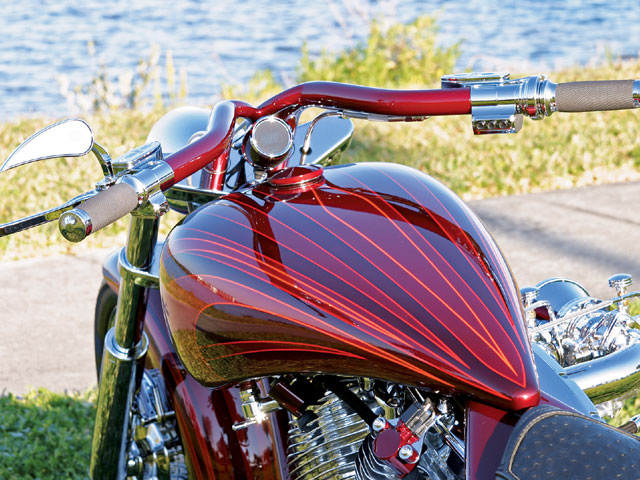 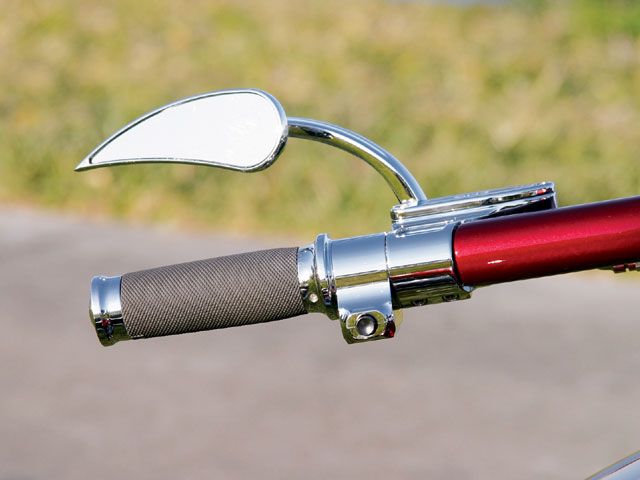 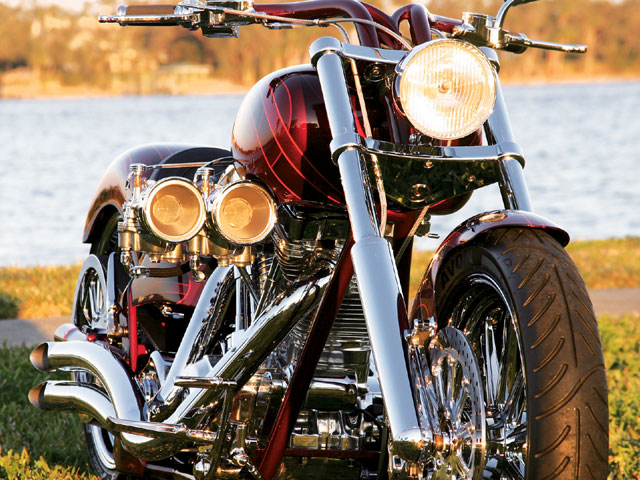 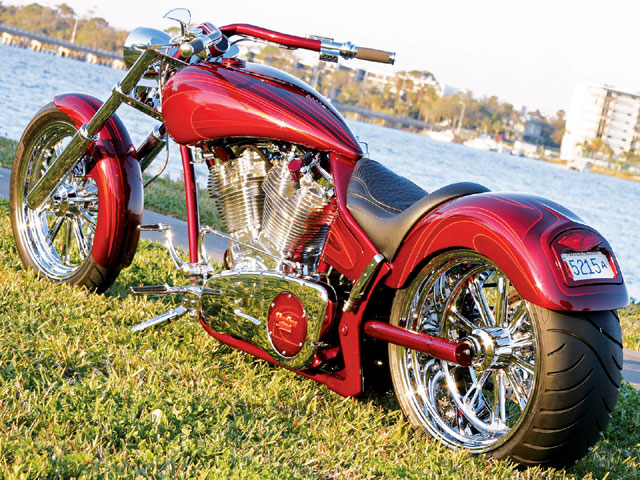 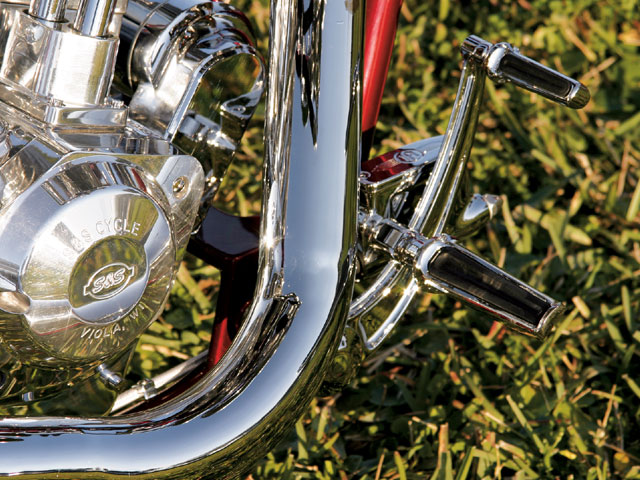 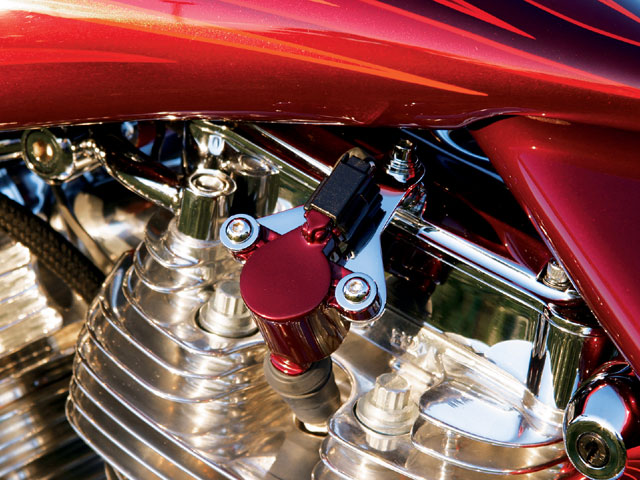 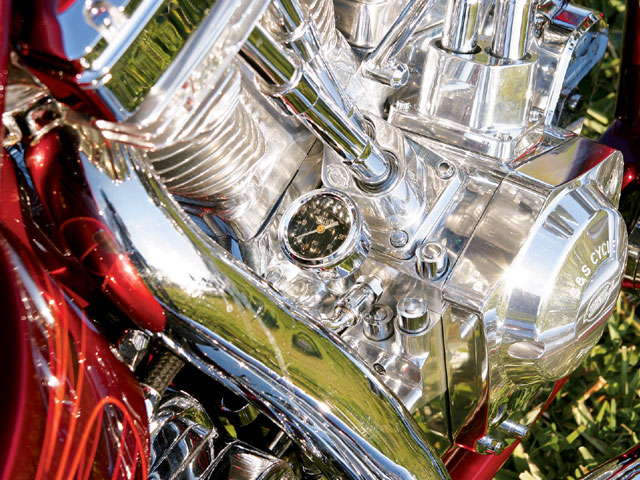 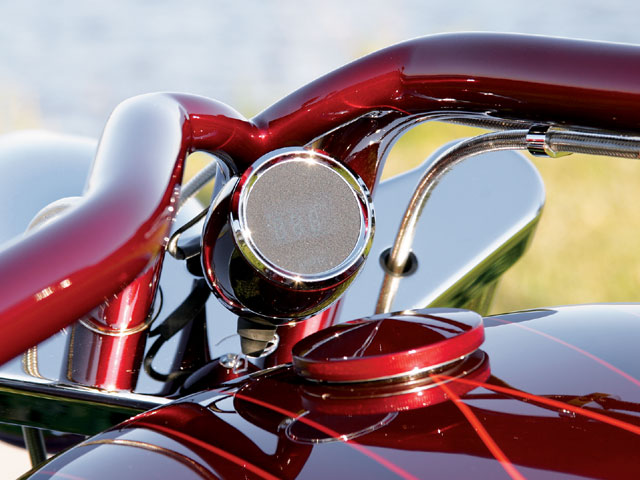 As hard as it is to give up the steed that carried you around the country for countless miles and smiles, there comes a time when you’re ready for a new ride. The following bike-triangle adventure involves two MC industry veterans and an H-D FXRT, beginning in Sturgis via Massachusetts…before an unfortunate event in Daytona altered history.

In the badlands of South Dakota, Mark Shadley, riding his bubble-fairing-equipped rubber-mount, ran into motor guru Kendall Johnson. After they consumed a few cold beverages, the discussion between the two turned to the touring FXR and Mark wanting to build a new digger-style scoot around a Daytec cradle. Without hesitation, Kendall proposed a trade: the FXRT for a worked and polished 124ci motor. A deal was made, but Mark wouldn’t be able to receive his motor until the following Daytona Bike Week, roughly seven months out.

Mark went back to his Whitman, MA, Shadley Bros do-it-all shop, where for more than 26 years he’s been building custom cars and bikes. Autumn and winter came, as did falling leaves, rain, and ice. Aside from the ubiquitous holiday toy runs, there’s not much to quench the motorcycle palate in that part of the world. However, when March rolls around, the pilgrimage (particularly for East Coasters) to Daytona signals the end of hibernation and battery tenders, along with the prospect of warm(er) and hospitable Florida and the upcoming riding season.

After the long journey, Mark looked forward to picking up his new motor and getting the project rolling. Unfortunately, some thieves broke into Kendall’s trailer, taking the 124 and a whole lot more. On the upside, S&S; had recently unveiled a 145ci single-cam mill that Kendall was willing to supply. With the motor in the mail, so to speak, Mark was on his way to finally getting started on the bike.

With a Daytec swingarm frame in hand, Mark soon found that his first hurdle would be fitting the 145 between the framerails. Out came the torch to accommodate the taller motor. In the rear, Mark had to raise the backbone almost 2 inches and stretch it 7 inches while dropping the downtubes 2 inches. The entire 40-degree neck and radiused front section was handmade, while another 5 degrees would be added later through the raked triple-trees. That was just the beginning of the fab work, as most aftermarket parts did not fit the 145. He fabricated a dual-runner intake manifold to affix two S&S; carbs. Both Super Es breathe through dual Wimmer velocity stacks. A Dyna ignition fires unique Shadley Bros mini-coils that sit directly on each spark plug. Mark bent his own over/under pipes that frame the lines of the monster mill.

Hooking the power to the rear PM wheel is a right-side-drive Baker six-speed enclosed in the company’s billet-aluminum cover. Further enhancing the sleek lines of the bike is a Baker slammed starter primary covering a special-construction Bandit clutch. Power from the tranny travels via belt to a PM combo pulley/brake rotor. The rotor portion is clamped by an inboard brake setup that not only slows the bike but keeps the left side of the 250-skinned wheel free from clutter. Another 18-inch PM wheel sits up front in the 41mm Perse/RaceTech forks complete with 13-inch full floating rotor and stout six-piston caliper.

Mark started with Russ Wernimont fender blanks to create the look he was going for. The rear fender, with internal struts, was modded to accept a frenched-in license plate and taillight, with a sleek tire-hugging unit used up front. A stretched and curved teardrop gas tank was made to follow the lines of the frame and accentuate the motor. Due to the carbs hugging the right side of the frame, the gas tank needed to be dimpled for clearance. Once all the skins were done, Shadley Bros shot the wine-colored paint, getting help from John Hartnett for the subtle graphics. Mark bent his own handlebars and provided a perch for a single Dakota Digital gauge. A single Ness mirror sits atop the left PM Contour control that features micro-switches with internal wiring.

After a year of build time, Mark and his buddies returned to the next Bike Week to put some miles on his new custom. Under Mark’s humble, down-to-earth demeanor lies a madman when it comes to twisting the wick. If you can catch him cruising in Sturgis again this year, be sure to ask him about his next personal build.

The Cannonball Golden Ticket could be yours!

On June 29, 2014, one lucky motorcyclist will win the antique-motorcycle adventure of a lifetime in the Golden Ticket Sweepstakes, being […]

At $220, they’re not cheap. But who wants cheap when it comes to Kevlar? Courtesy of Held The Held Hoover […]

Coming into Sturgis the rumors were flying about what new Indian model they would be releasing. Finally, when the announcement […]

2004 Heritage Softail – A Lesson In Innovation